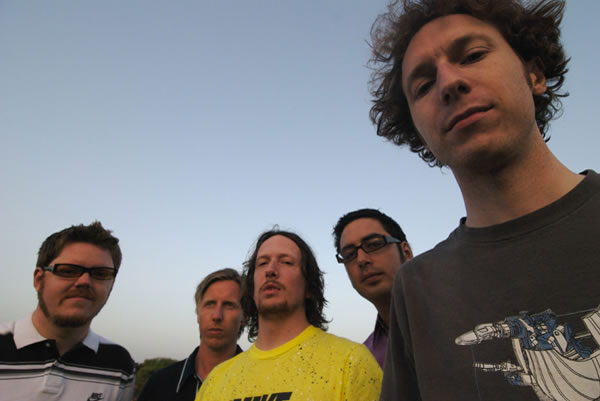 Rocksins recently had chance to hook up with Hundred Reasons. A Few months after the re-release of their Quick the Word, Sharp the Action on their own label, due to not being dropped from one label, but 2. Still going strong, Hundred Reasons show superb talent that makes every gig a privilege to see.

Rocksins: When you released ideas above our station it hit #6 in the uk album charts and spawned several uk top 40 singles, what was that like for you? did the fame hit your heads or did you stay calm and cool?

Colin:I don’t think the fame hit anyone’s head as we were too busy to really think about it. We were away so much on tour that we didn’t really have a chance for it to sink in before we started on the second record

Rocksins: Where were you and what were you doing when you found out the album hit #6 in the charts?

Colin: I was in my local town getting some stuff and I saw it in HMV and thought ‘Awesome’. It was very cool to see that for the first time.

Rocksins: Your second album is said to have sold 65,000 copies, yet sony bmg dropped you, what was that like for you as a band, what happened ? and what did you do to get back on your bikes and pedal again?

Colin:Our relationship soured with Sony when the MD left the company as he was the reason that we signed in the first place. We felt that decisions made after that event were impacting the band in a negative way so we were happy to leave the label and were banking on it. As far as getting back on the bike, we never fell off it.

Rocksins: its true that lightning defiantly does strike twice, at least with hundred reasons, v2 were bought out and you were once again without a label? what was it like and how did it effect you?

Colin: This time it was a bit more difficult for us, but again, we’ve always been a band that just enjoys making and playing music. In that time it was difficult as a turnaround in priority was necessary to stay functioning. I mean in the context of the band no longer paying the bills!

Rocksins: Quick the Word, Sharp the Action, was released on 15 October 2007, but because of the v2 buyout it didn’t reach much of an audience. you re-released it again April 20 2009, what was the second release feedback like? did you reach your fans the second time round?

Colin: The re-release has allowed things to function with more control for the band, so we hope that over time it’s reached our audience. Having a song as a free download on Guitar Hero is helping.

Ben: I played guitar in a band called the lucky nine with Colin, Daniel P Carter and Richie Mills and had known the guys in HR since the start of their journey. When Paul quit I was the instant choice and because we all knew each other so well it was more like bringing in a family member than a stranger.

Rocksins: on Wikipedia it states that qtwsta was a dark period for the band in which you were told you may never sing again, can you shed some light on that for us.

Colin: I had found out a few months before that I had some nodes on my vocal chords but it was caught in time to avoid any laser surgery. I did have to shut the hell up for about a month though. It was very dark for me at the time but it’s all in the past now.

Colin: We don’t have the time to get together as much as we’d like these days but we do jam and slowly but surely, we’re getting a new record together. It may take a while, we will make sure it is worth the wait.

Colin: I have no favourite as it is the show itself that makes it

Rocksins: What’s in your music play lists at the moment?

Colin: Just started listening to an album by a band called Karnivool which is cool.

Rocksins: What’s the most rock/metal moment in your career?

For more interviews with rock & metal superstars including one we did recently with Skindred’s Benji Webbe (which you can read here) please keep checking back with Rocksins – the more often you come by the better.