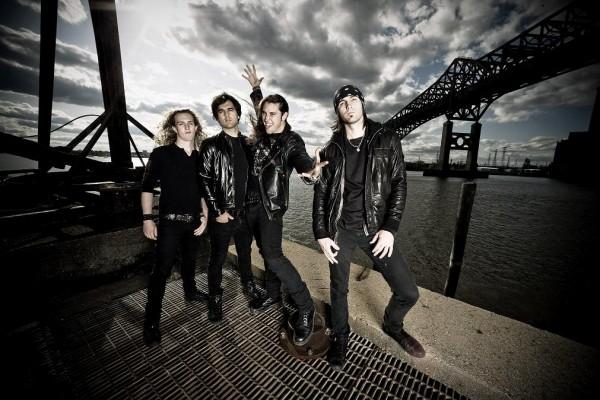 Back in August I bought my tickets to see All That Remains in November. As I was looking through the supporting acts I noticed these guys called Taking Dawn. Of course like any band I haven’t heard of before, I started to see what I could find out about these guys. I quickly found their tour info on their Myspace page and noticed that they would be coming to my area in a couple of weeks. So I made plans to see exactly who Taking Dawn were and what they were all about.

When I first noticed them, they were setting up on stage and I quickly had my doubts. Immediately I thought they were four altar boys trying to be rockstars. Then the lights went down and fog machines filled up the centre of the stage with a cloud of mist as their intro music played. A lot of us still had a huge “what the fuck?” reaction as we sat there waiting to see what was going to happen next. What happened next was these four fucking maniacs took the stage and blew us all away for the next 30 minutes.

That was back in September and then I caught up with Taking Dawn again in October while they were supporting Sonata Arctica and Dragonforce. This past week the All That Remains show came through and with it the guys from Taking Dawn. This time I was also able to gain early access and talk to the guys before the show and sit in on their sound check. Once satisfied and ready to kick ass the guys went to get ready to show Baltimore how to rock the fuck out.

It is always fun when you are the person that knows the answer to something everyone wants the answer to. Standing in the crowd and listening to the questions and comments of the people around me was quite amusing. Most of these people were where I was back in September with the “what the fuck?” going on inside their heads. Once the lights went down and the fog came rolling in I knew what time it was. Everyone else was about to find out.

Taking Dawn doesn’t ask that you go fucking nuts and rock out, they command it. Chris, Mike, Andrew and Alan are animals on stage and it is so damn infectious. It isn’t rock or metal or emo or anything that you can put a label on. The guys from Taking Dawn have come up with their own musical recipe and it definitely works. The music mixed with the presence of these four maniacs on stage makes for one of the best live shows you will ever witness.

Currently Taking Dawn only has a three song EP out and it is a total tease. All three songs are just so damn addicting. “Like a Revolution”, “Time to Burn” and “Godless” will all sink deep into your brain and you will randomly throw up the horns and shout “Halle Fucking Luiah” even when you’re not actually listening to any of the tracks. The full release, Time to Burn, will be coming out January 26th from Roadrunner Records in the US. Until then you can catch up with all things Taking Dawn on their newly launched web site, www.takingdawn.com.

For more rock & metal gig reviews please come back to the site regularly to see the latest reviews, new bands are being reviewed all the time.