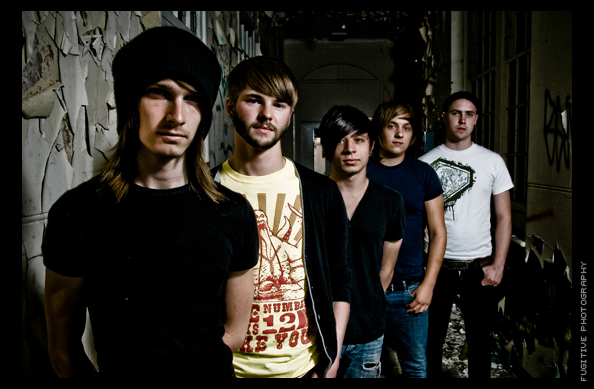 Rocksins recently had time to catch up with Oceans Upon Us, an up and coming unsigned UK band, who have been nice enough to take some time out of their currently hectic schedule to have a chat with us about the band, and their upcoming EP “The Last Word” – which is currently due to be released on 22/01/2010.

Rocksins: Tell us a little about Oceans Upon Us-what would you say to new/potential listeners?
Rob: Check us out on myspace and go look for yourself.

Aaron: We’re a sound merged through listening to bands like Funeral For A Friend, AlexisOnFire, Placebo, Killswitch Engage, we like to play hard and fuck harder. That’s the story of Oceans 😉

Rocksins: How did you guys meet?
Rob: In a gay bar……

Joe: Ha! Yeah, we we’re looking for a second guitarist and were informed that was the best place to bump into Rob…haha!

Aaron: Jon had just left a previous project and got in contact with Rob. They wrote some material and realised it was coming together a lot better than either of them had imagined. By chance, Rory contacted Jon after splitting from his own project which was also home to our drummer, Joe – They all ended up arranging to get together and a bulletin was spontaneously posted on MySpace (Back when MySpace was cool… you remember those days? – The days of MySpace whore-age and spam bulletins?… yeah! Them days were sexier than Mitch Hewer in the shower naked) Anyway… Aaron (that might be me…) then responded to the bulletin after again quitting a project a few months prior to the post. Jon called me up and we all ended up in a room together… naked 😉

Rocksins: What influences do you have as a band?
Rob: Jack and Coke. Susan Boyle (Sharon Osborne said she looks like a hairy arse hole, ha) and Meshuggah.

Joe: As a band we take influence from Funeral, Fightstar, Thrice, 30Seconds and Underoath, but on personal level, Mem from Ghost of a Thousand and Aaron from Underoath.

Rocksins: So we heard you are currently putting the finishing touches to your new EP which is due out soon, can you tell us a bit more about it?
Rob: It’s got 5 songs on it. Five people play on it. It’ll probably be about five pounds.
We’ve had these songs ready for a while now and we’re so glad to finally be able to get them out there for people to hear. It’s been a long, frustrating wait but we’re nearly there and I think we’re all pleased with how the songs have turned out.

Joe: Yeah, It’s been a long time in the making so although a couple of them are now fairly old to us as a band, but they’re all tracks that haven’t been released before, so we’re really looking forward to hearing the response to them! The EP is due out in late January as well, but all the info like track names etc will be announced soon!

Aaron: The title track single ‘The Last Word’ is out on Dec 7th. The EP is out on January 22nd on the day of the actual EP release show.

Rocksins: How was the recording process for the EP? Were most of the songs conceived by one person in the band or have all of the songs been a collective effort?
Rob: The recording process was the longest most drawn out thing I’ve ever experienced. A lot of work went into the pre-production for the EP and getting the songs right initially. Luckily we have the facilities and a little know how on the recording side of things, which helps. The recording itself went smoothly, getting the right mix not so. Getting that sound that’s in your head into a production, multiplied by five people in the bands opinions is hard work. Especially on our budget!
The songs all end up being a collective effort by the time we play them live. Contributions differ over each song, but that’s how you get good diversity and an interesting collection of tunes.

Aaron: The band write the music – there’s no one person that sits behind a quill and writes as if they’re Samuel Peeps ;). The recording process was ok. The mixing process was awful. We only wish to thank Neak for the hard work, and just plain warmness towards us from day one. He never ceases to look after us. We owe that guy a lot. We can’t thank him enough for all he has done for us. We highly recommend him to anyone.

Rocksins: How has your reception been at overseas shows so far?
Aaron: Absolutely fantastic. We sold a lot of merch on our travels and really enjoyed playing with such massive bands. Misery Signals were top guys, Waking The Cadaver were hilarious, Your Demise, The Number 12 looks Like You and It Prevails were all top lads too 😉 We’d also like to take the brief opportunity to thank Proceed for always being up for a laugh =]

Rocksins: What’s your favourite venue to play at?
Rob: I quite like the Twist in Colchester. It hasn’t got the best PA or the best stage, or the best lights, but it’s got a great atmosphere when we play there.

Aaron: We do pretty well at a venue in Rayleigh called The Mill. The sound isn’t great but we get treated real swell by the fans in that place.

Joe: Yeah I love the vibe in the Twist and the fans at the Mill. Favorite venues for sure.

Rocksins: What’s on your music playlists at the moment?
Rob: Dustin Kensrue, Architects, Born of Osiris, Toto, Between the Buried & Me.

Aaron: Imogen Heap, Placebo, Muse, – Personally, I like stuff that most people don’t understand or enjoy. I live for music that has something to be in awe of. Matt Belamy is one guy that inspires me a lot before I set pen to paper. Brian Molko, Hayleigh Williams and Imogen Heap inspire me a lot lyrically and melodically.

Rocksins:What’s your touring schedule like at the moment? Where can we see you?
Aaron: Next year is a UK fest – we’ll be racking up dates wherever we can. Fancy booking us?

Joe: Yeah hopefully we’ll be touring in February for the EP which will be sweet I’m really looking forward to it!

Rocksins: Can we expect to see any appearances at summer festivals next year?
Aaron: We very much hope so, it’s not something we’ve found an easy venture – but needless to say we’re sure we can pull something out of the hat.

Rocksins: How’s it been so far as an unsigned band? Have you had any interest from labels yet
Joe: Being unsigned has its pros and cons I think. It means the money we make back off merch and through gigs is 100% ours…which is cool coz we can decide what we want to spend it on and we’re not worrying about owing anyone anything! We also get to write exactly the way we want to and at our own pace! But on the flipside we don’t have the exposure and promotion behind us that we would off of a major label. We had a couple of management deals offered to us this year with the promise of label interest as result…but they we’re quite right for us at that stage and we didn’t feel ready as a band to rush into anything at the time.

Aaron: Being in an unsigned band in this industry is by far better than being pinned to a table and being told that you’re being robbed for 75% of everything you (rightfully) have earned (It’s almost not an exaggeration). We’d love to be signed – but we make more money from being unsigned – and although we feel the RIGHT label could make us potentially very well-known – currently the offers we have had laid on the table for us have been the work of con artists – We’re honest guys, we just want an honest deal.

Rocksins: Finally, what’s been your most rock moment so far as a band?
Rob: Seeing Jon puke out of the side of the van, pissed off his face on ponsed beer after our first Belgium gig.

Joe: Man, that was definitely the most rock moment! I love the fact that it was right at the back of the venue so all these pro bands were packing up gear trying to avoid Jon’s sick pile!

Aaron: We played a show recently to 500 kids and pretty much every one of them knew the words to our first EP. We were stunned an amazed… i even shed a tear… oh actually, no… that was just the sweat. We love that =]. Besides that… Jon accidently threw his guitar and split the neck onstage once… meh… that was kinda funny… in a horrible ‘oh shit’ way. 😉

For further interviews with rock & metal artists please keep checking back with the site regularly, as you never know who we will be talking to next.