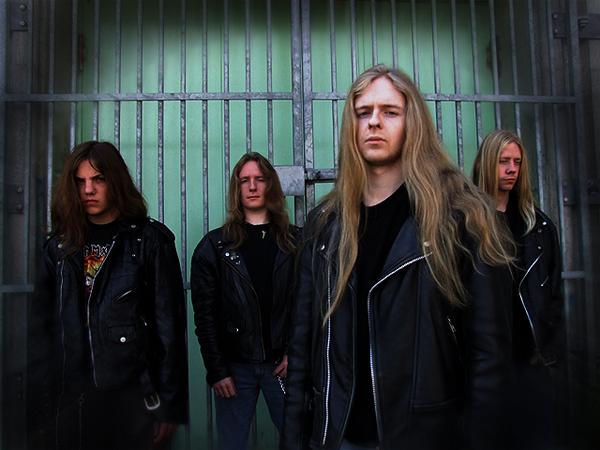 Rockins has recently been lucky to catch up with Rich and Pete from the brilliant up and coming UK Metal band Warpath, Check it out below:

Rocksins: Tell us a little about Warpath – What would you say to people who know nothing about the band?
Rich: I’d say “you don’t know about us? Damn, that sucks!! Go check out our album and video! We’re a no-bullshit, aggressive thrash metal band in the style of early Metallica, Megadeth and Slayer”.

Rocksins: How did you guys meet?
Rich: I formed the band in 2003 with a different line up which worked for a while but I quickly realised they weren’t the right people and wouldn’t last long. They were more interested in playing the pubs to their mates and girlfriends and getting wasted instead of practicing. Gareth, our bassist, has been in the band since the early days. Our drummer James had seen us live a few times with the old line up and contacted me when he heard that we needed a new drummer. We didn’t bother auditioning anyone else after we heard him.

Pete: Richard actually contacted me via MySpace back in summer ’07 and I was so blown away by the bands original demo that I just couldn’t say no and was dying to play lead and go wild over their awesome riffs!

Rocksins: How’s your debut album Damnation doing since its release last year? Have you still been getting good feedback?
Rich: Yeah, it’s fantastic. We’re still getting great reviews and the sales are growing, so we’ll keep promoting it. We’re making new fans every day.

Pete: It is doing amazing! The feedback has been awesome and only gets better each and every day; Damnation is still going strong and proving itself to be the ultimate metal machine.

Rocksins: How did you feel being voted best unsigned band of the year back in January, and having the #1 rated video on Scuzz?
Pete: It’s amazing knowing that your hard work and effort has paid off with such a result. We were crammed in the back of Richards dads car when we picked that issue of Terrorizer up and people passing by must have thought a bunch of wild lions were loose in the car we were cheering so much! And the same with the video on Scuzz, knowing your video and hard work has put you ahead of bands like Slipknot and Machine Head is just a mind blowing achievement!

Rocksins: It must’ve been a crazy feeling playing your first overseas show, how did it go for you guys?
Rich: Unforgettable. We were treated with such a level of respect which we’re not used to with a lot of British promoters. The fans were awesome too. They knew the lyrics so to hear them screaming the song titles and words was wicked!

Pete: It was phenomenal! Not only was it our first gig abroad as a band but to play one of the biggest heavy metal shows in a country that has spawned some of the biggest metal bands in the world was an honour and a heavy metal dream come true! The reception from the fans was overwhelming and we were treated like metal royalty. It was one the most amazing experiences of my life & will stay with me always!

Rocksins: What influences do you have as a band?
Rich: Megadeth, Metallica (the old stuff!), Slayer, Guns N Roses, Death, Testament.

Pete: Metal bands that inspire me, haha I could talk about this for ages! Iron Maiden have always been my biggest influence but I also love Annihilator, Eidolon, Testament and other styles of metal bands like King Diamond, Primal Fear and Leatherwolf who’s duel guitar harmonies are so melodic and literally at the speed of light! Can’t beat that stuff!

Rocksins: What’s been the highlight of your band so far?
Rich: Ah that’s a tough one. There have been a few! Wacken Rocks, Best Unsigned Band, No.1 added record on USA metal radio and No.1 video on Scuzz. It was also amazing the first time I saw the album in-store at HMV in Cardiff.

Pete: I’d say being in Terrorizer as Best Unsigned Band of the Year and playing Wacken Rocks in Germany, but also the first time we saw our music video for’Damnation’ was such a great feeling.

Rocksins: What’s your favourite venue?
Pete: I actually love JB’s in Dudley, but I know that will change after we go to Japan next year!

Rocksins: What’s on your music playlist at the moment?
Rich: I’ve got a weird mix of Megadeth, Metallica, The Departed, The Dark Knight and other movie soundtracks, Metal Gear Solid and Prince of Persia video game soundtracks, Testament, Pantera, Rammstein, Michael Jackson, some Latin music and some classical Bach and Rodrigo.

Pete: I actually have a mixture of 80’s soft rock and AOR to King Diamond to Mortician, go figure!

Rocksins: What’s your touring schedule like at the moment? Where can we see you?
Rich: Our next show is Hammerfest II, March 2010 with Iced Earth, Devil Driver, Napalm Death, Suicidal Tendencies, and a whole bunch of other awesome bands. It’s a two day festival in North Wales. Two weeks later we’re off to Japan for True Thrash Fest II in Osaka. After that we’ll be in Germany for a while, and then back to the UK. We’re going to book more UK shows for next year.

Rocksins: Can we expect to see a new album any time soon?
Rich: Next year. We’ve got four or five half finished songs which are going to be on the next CD. We’ll probably start working on it in April, after we get back from Japan.

Rocksins: We noticed that you’re still listed as unsigned – surely Warpath must have had plenty of labels poking around! Do you guys prefer being unsigned and having total creative control of the band? Or are you simply waiting for the right label to come along?
Rich: Yeah it’s a bit of both really. Right now we have 100% control and can do whatever we want; we don’t have to answer to anyone. We’ve had interest and offers from a few labels which are a complete joke, totally unacceptable deals for us. It makes me wonder how some of these labels do any business at all. Until they decide to talk business properly and offer real support, they can fuck off.

Pete: We’re actually doing well at promoting and advertising ourselves and selling the album, we know exactly what we want and where we are going, but if a big enough label has the same vision as us the result will be massive!

Rocksins: Finally, what’s been your most metal moment so far as a band?
Rich: Sharing the bill with Slayer, and Dave Mustaine of Megadeth checking out our album by his tour bus!

Pete: Well we haven’t killed any babies or drank any blood on stage YET! For me I’d have to say the fans at the second day of Wacken Rocks in Aurich, leaving the U.D.O. crowd to come and be at the front for us was amazing! I love U.D.O. he is awesome, a real metal icon and watching people leave his crowd to be at the front of the stage we were at was mind blowing!

For more interviews with rock & metal band members such as this please keep checking Rocksins.com for new interviews on a regular basis.