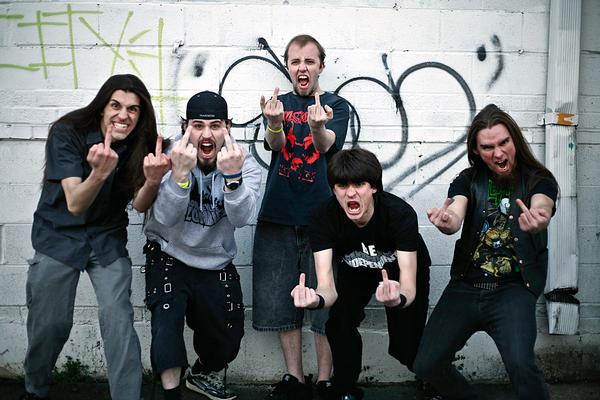 I am willing to bet all of us have at least one story that involves drinking copious amounts of alcohol and comedic revelry. Out of these moments grand ideas are formulated and often brought to life only to be laughed upon and thrown back into the pit of stupidity. That is until one day someone tells their friend they should start a metal band and write songs based on their shenanigans. It was at that moment that the gods of metal reached down and gave their blessing on such an idea. As the skies parted and the thunder crashed there came a wave of Jagermeister and beer. It was out of this moment of destruction and bliss that Cab Ride Home was born.

Cab Ride Home started out as a four-piece who melted into a three-piece and have now grown into a five-piece metal band whose sound is oh so horn worthy with lyrics drenched in alcohol-fueled moments most of us may have survived at one time or another. The current incarnation of Cab Ride Home is not the same band that recorded their latest album, The Intoxicated Massacre. Now the guys from Cab Ride not only play a bit faster and a little harder but each member has honed each of their own musical abilities making the whole of the band one of the best underrated and unknown live metal shows one will ever witness.

The set kicked off with Retox which is about waking hungover and then getting rid of said hangover by drinking some more. This would lead us into .245 (Overtox). A song titled after Masten’s (drums) BAC during a trip to the hospital one night. How could anyone follow up something this grand? Why, with a song about Arnold Schwarzenegger running a pizza shop aptly named Bullets and Pepperoni. The highlight of this track is when all three fret burners take center stage and make the kiddies in the front row lose their fucking minds. Cab Ride then dropped a new track, titled Slaughter Brew that had horns high and heads moving in time to the fast trashing massacre up on the stage.  The energy in the room could have powered a small country for at least a day.

Cab Ride then performed their ode to friends and family who have passed away and wish to drink with again entitled One Last Round. Even on a track with such sentimental connections Cab Ride Home still tore the place apart and went buck wild. The song started off like most ballads about unpleasant things and the place turned into a lake of floating fire as people held up their lighters. Once the moment of remembrance was over Cab Ride kicked into overdrive and it was nothing but headbanging and horns flying in all directions.

Closing out the set was crowd favorite and all around party starter, DOA (Drunk On Arrival). The igniter to the song was that Cab Ride brought up friends and fans to sing along. So now you had Cab Ride Home giving it their all and then a chorus line of headbangers going apeshit on center stage. This made the crowd go fucking nuts as the whole place was just one huge mass of jumping, screaming, and people doing anything just to be in that one moment. Chaos would be an understatement.

The five guys from Cab Ride, Dan (vocals), Enock (lead fret burner), Bane (rhythm fret burner), Beefy (bass fret burner), and Masten are folks who each have day jobs like the rest of us mere mortals. They have no record deal or headlining tours. There is no manager booking them gigs or setting up PR events.They put in their forty hours a week and practice when possible. However, for thirty minutes on a single night every couple of months these five guys rise up become metal gods up on the stage and give it everything they have in order to ensure that the traditional of metal is passed on to a new generation of metalheads that have come to see their show.

You can get all of the Cab Ride Home your little metal heart desires over at their Myspace page.

Photos of the show can be found here