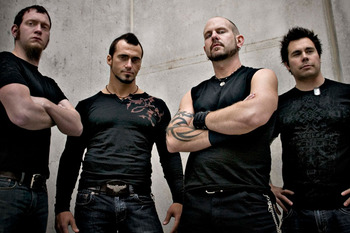 Destrophy, have you heard of them? Don’t worry, you sure as fuck will. These four architects of metal hail from Iowa and whatever the hell they put in the water there, the rest of world could definitely use a glass or two. From start to finish the show was balls to the wall brutality mixed with doses of sweet soaring melody. This is wherein the beauty lies. Just when you think you know what to expect to permeate through your ears Destrophy completes surprises you and fucking blows you away.

Bassist Phil T and drummer Joe Fox beat your skull with some of the sickest sounds to ever come through a PA system. It is a fast, dark and primal sound pounding through your entire body causing you to respond in the most natural way possible; by banging your fucking head and jumping into the pit to fuck up anyone who gets in your way. If you need to rid yourself of a few demons this is just what the doctor ordered.

Sharing the duties of shredding along with vocalist Ari is Erik Tisinger and these guys can pull off some of the sweetest fretwork to have ever graced your auditory nerves. Listening to these guys on the bottom of the bill just doesn’t make any damn sense what so ever. The musical majesty formed when Destrophy takes the stage is beyond the caliber of an opening act and it shouldn’t be long until you see these dudes headlining their own tours.

Destrophy are currently touring with Otep on the Rise Rebel Resist tour promoting their self-titled debut which was released in October 2009 on Victory Records. You can catch Destrophy destroying the following locations throughout the remainder of the month.