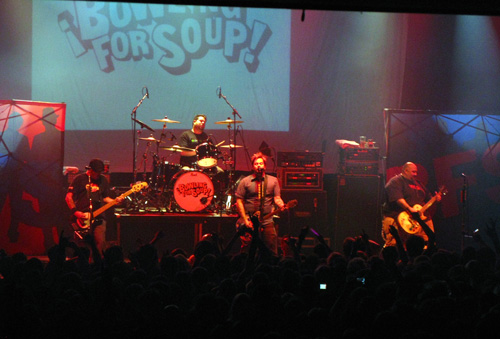 As my friends and regular visitors to my personal website (mysweetshadow.co.uk) know, I am something of a Bowling For Soup hardcore fan. So, when they announced that their latest UK tour was kicking off in my new place of residence Cambridge at the Corn Exchange, it was pretty much guaranteed I was going to be there. The last time I saw BFS was on their most excellent accoustic tour back in April at Islington Academy, one of the best live shows (stand-up and music combined) I have ever seen, so there were even higher standards to be met than usual.

I was extremely lucky to be able to interview Erik Chandler, the Bowling For Soup Bassist before the show who gave me a fascinating insight into the band as well as quite a BFS history lesson, look for that exclusive interview right here on Rocksins.com in the next week or so!

Back to the show and there was quite a lot of support to get through before Bowling For Soup would hit the stage. First up, playing their show in 7 years were Brit-rockers A. Yes that is the A that brought you “Nothing” and a UK number one with “Starbucks”. To start off with, the younger crowd down the front didn’t really seem to know who they were while the older lot towards the back nodded in half-rememberance. Lead singer Jason Perry remarked that he was old enough to be the dad of most people down the front, but after pulling out the aforementioned Starbucks quite early on in the set, the crowd really warmed to them. My only previous experience of A live was at Limp Bizkit’s free gig in Finsbury Park back in 2003 and I didn’t remember them being great on that occasion. However this evening there was some good old fashioned British hard rock from the boys, who did pretty well “after only having one rehearsal”, with only one visible screw up. Finishing off as expected with Nothing, A got a huge cheer from a mostly full Corn Exchange. As comeback shows go, I would imagine they would have been pretty pleased. I’d give A a very respectable 7 / 10.

Next up after A were The Dollyrots from California, who, subject to a scheduling quirk of some description, had roughly half the 40 minutes A had, despite playing before them. They are a fun 3 piece with a female singer who were on their first trip to the UK, and their brand of girl powered pop-rock went down pretty well with the audience. One song of note was their cover of “I’ve got a brand new combine harvester” which I am told I should be ashamed of for not having heard, but I am afraid I was left to listen in ignorance. Their set was short and sweet, and from what I could tell they spent the rest of the evening signing stuff at the merch booth. You could be hearing more things about The Dollyrots soon. 6 / 10, might have been more if they had had a longer playing time.

Main BFS support band were fellow Texans Forever The Sickest Kids. I’m showing my ripe old age of 25, because I’ve never heard of them yet they were met with a reception only previously reserved for Bowling For Soup themselves at a BFS gig. The place went mental. Incase you, the readers are not familar with Forever The Sickest Kids either, they’re a six piece band from Dallas who seem like they could very easily be the next Fallout Boy. They have shortish, catchy songs, with some good guitar hooks and a typically emo(y) singer (but not too far into the stereotype to make it unlistenable). For the next 45 minutes from my perch up in the VIP area (thank you Emma W!) I watched everyone under the age of 20 lose their minds, while the infectiousness of it got most of the adults caught up in it by the end of the show. I can’t comment much on individual songs, but whilst they wouldn’t be most metal heads cup of tea, they do what they do very well and I could see them getting very big indeed. 6.5 / 10

After a pretty quick change around (which was needed as it was getting rather late) the traditional “Here comes Bowling For Soup” intro came out over the PA system and the guys made their entrance. On recent full band Bowling For Soup tours they’ve opened up with one of their big hits such as Punk Rock 101 or The Bitch Song, however for “The Just Can’t Get Rid Of Us Tour” the BFS guys changed things up a little and started off with a couple of older favourites (both of which got an airing on the accoustic tour) Star Song and the awesome BFFF.

The entire standing area of The Cambridge Corn Exchange was soon bouncing for all its worth with a double dose of “Almost” and one of my personal favourites Ohio (Come Back To Texas) before launching into My Wena, which only people who’ve had a sense of humour transplant could fail to find amusing. The fact it was the first night of the tour did not mean we were lacking the usual on stage banter, which was in full flow, particularly when Jaret tried to attach a broken watch to Erik’s trousers, only for the watch to be so broken that failed miserably, or the fact that both Erik and Chris kept flicking plectrums at Jaret and it took him about half the show to catch one!

A quick run through the Phineas and Ferb theme tune followed with Jaret remarking they should make all their songs that length (around 30 seconds) and Chris saying the next BFS album would have 114 songs if they stuck to that. New single Friends Chicks Guitars (and No Beer) gave a very promising preview to what the upcoming new album may sound like. Erik had told me in the interview before the show that they had a new cover song lined up and true to his word they broke out a hilarious rendition of The Ting Ting’s Thats Not My Name, which shouldn’t have worked in a million years but it worked really well.

From there on out it was pretty much non stop big Bowling For Soup hits with Punk Rock 101, High School Never Ends, old favourite Shut Up and Smile (voted for being played on the tour by BFS fans), Girl All The Bad Guys Want, No Hablo Ingles and rounding things off with 1985, Jaret pausing only to put on some glasses thrown onto the stage.

The guys weren’t quite done as they returned after a short break to give everyone one last chance to dance in the encore with “A Really Cool Dance Song”. If you haven’t heard this song, please go and buy it, download it, myspace it, whatever. What was originally designed as a piss take is actually a fantastic rock-dance song, I’d take that over Pendulum any day!

After seeing us off with A Really Cool Dance Song (and leaving their sound techs to finish the playing of the song so they could boogie on stage) Bowling For Soup departed, with the promise of a new album early in 2011 and a new accoustic tour in April!

The Full Bowling For Soup Setlist Was:

As always, Bowling For Soup’s live show is an entertainment show (beyond just the music) that is matched by very few bands going today, regardless of how heavy or “metal” they are. If you want a great time, go to a BFS live show. You won’t be disappointed.

9 / 10 once again, they lose out because they didn’t play two of my favourites but you can’t have everything all the time 🙂

Be sure to check back on Rocksins.com soon for our exclusive interview with Erik from BFS!