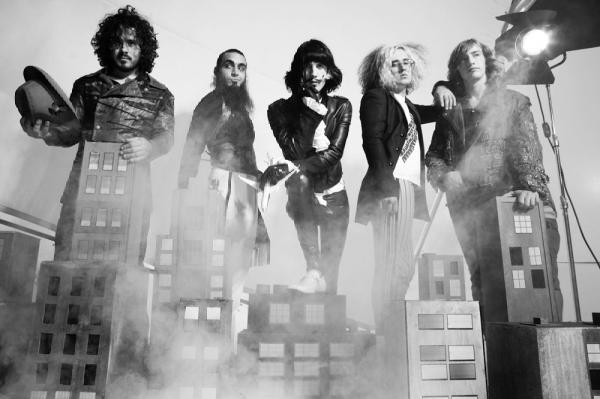 People of Birmingham and surrounding areas, where were you last Thursday 4th November? I can tell you this much, you weren’t in the HMV Institute witnessing the dazzling Foxy Shazam.

Unbelievable but sadly true. In a venue that was optimistically a quarter full, Foxy Shazam put on one the best performances that I have seen in recent years. Whatever you read about this band always reverts back to the prowess and stage presence that they display and tonight was no exception. I can only imagine how disheartening it must feel to walk on the stage to a virtually empty room but from the get go, the band played as if they were performing to a crowd of ‘300 million’ as lead singer Eric Sean Nally pointed out with his tongue firmly in his cheek.

So how can I describe what it’s like to see a Foxy Shazam live show? Well, it’s much like the sensation that Tom has when he’s hit in face with a frying pan by Jerry. You’re not quite sure what has hit you, left in a bit of daze wondering quite what went on. Your eye is drawn to charismatic Eric Nally who, when he wasn’t covering every inch of the stage, was launching himself over the barrier and scuttling across the floor on all fours, or launching himself on top guitarist Loren Daniel Turner’s shoulders during ‘Killing It’, or launching his mic stand off the stage during opening number ‘ The Only Way To My Heart’. But the beauty of Foxy Shazam live is not based purely around the visuals of its enigmatic frontman. To his left, the bearded figure of Sky White is sat at his keyboard. Or on standing on top it and playing with his feet. Or upside down whilst still playing it. You see, there is something going on whichever way you look. Synchronised headbanging with no music – yes, in between banter that sounds like an insane preacher – yes, a sense of excitement about what is coming next – yes. Throughout the chaos on stage, Foxy Shazam perform a perfect set pulling in the majority of tracks from their self-titled album and play them tighter than Eric Nally’s trousers. This is a phenomenally good live band.

And this is where I’m left scratching my head as to why whilst all of this was happening, not feet from me, did the lucky crowd that were there not go completely ballistic? I’m not sure if they were bewildered by the whole thing or whether they were just generally apathetic. I can’t see how the band could have given much more, they certainly deserved a lot more in return.