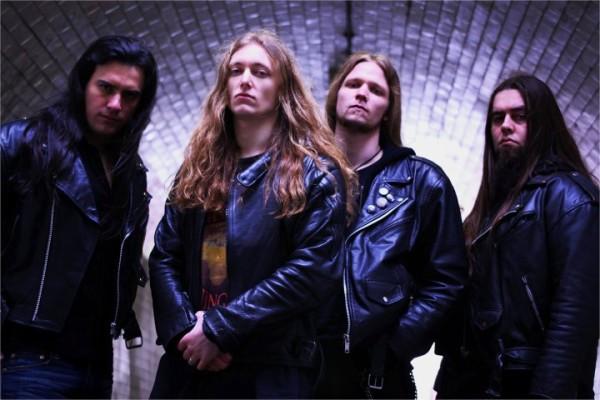 If you were to pick one genre of metal that summed up the entire world of heavy metal, then surely you would look very little further than thrash metal? Combining relentless riffs, crushingly fast solos and face pounding vocals, thrash metal has it all. From the enormity of the big four to the lower depth of the underground, thrash, undoubtedly, has an array of colour; enough of which to paint many masterpieces over the years of its existence. With humble beginnings in the early 80s through Anvil, Metallica, Venom and the likes, thrash has become a global dominating force; just ask one of the world’s biggest bands, Metallica, if you don’t believe us.

Now, as we head into its 4th decade of existence, some people could argue that thrash metal has run its course, that it’s now unoriginal and lacks the excitement it once had in the 80s. There are, however, many saving graces that have managed to inject some youth into a witheringly old formula. 2010, and a few years before it, are clear examples that thrash is long from dead. Bands like Municipal Waste, Evile, Gama Bomb and Savage Messiah have given us a reason to love the genre once again, and, as the youth burst through, the tiring mammoths of the past have undoubtedly found their form once again. Megadeth, Overkill, Testament, Exodus, Death Angel, Slayer and arguably Metallica have all released outstanding albums over the past few years, clearly showing us that the older ones can still do battle like they once did in their prime.

Yes, we could look back at the past of thrash metal with great enthusiasm, and yes, we could look at the present with similar, yet not quite as powerful, affection, but what for the future? How is 2011 going to fare when, in a year’s time, we compare it with 2010, and the years gone before? One such band that will be at the forefront of our future thrash thoughts is Savage Messiah; who are set to record and release a much anticipated, as yet untitled, third album. We’ve been talking to bassist, Sasha Krohn, and vocalist/guitarist, Dave Silver about signing to Earache Records, the upcoming new album and their albums of the year. Read on…

For those who are unaware of the band; can you tell us a bit about Savage Messiah, where and when did you form?

Sash: It started a bit before “my time” in the band, with Dave who had a previous project, but I am going to let him tell you that himself. I found my way into the band due to a “chain” of contacts. My ex-girlfriend was friends with Sy who knew Dave, and Dave was searching for both guitarist and bassist, so he asked Sy, and Sy asked me. And that’s how I filled the gap on the bass

Dave: I formed the band in 2007 after wrapping up my old project. I basically just moved to London with an album already recorded (Spitting Venom), got a line-up together and got on with it. Sasha joined after about 6 or 7 months when the original bassist moved to Texas. We’ve had a few other changes, but nothing too drastic unlike some bands. We signed our first recording contract in 2008 with Candlelight records, since then we released another record (Insurrection Rising), toured Europe with Overkill, played some UK festivals and now recently signed with Earache!

As you mentioned you signed with Earache, what did it feel like to have a major label behind you?

Dave: Obviously we’re totally psyched to have signed with Earache, and are looking forward to what we can achieve together.

Sash: I personally was more than happy, for both the band and myself. Signing to Earache is a major step for us, as now we can finally build up a professional profile for ourselves, and hopefully hit the road again as soon as possible. I believe that Earache have a very good understanding of what to do with bands,  just looking at the jobs they have done for bands such as Carcass, Morbid Angel, Evile etc gives me a very confident feeling.

What can we expect from the new album? Do you have a title yet?

Dave: Stylistically it won’t be too far away from what we’ve done before, because that’s what the band is about, however we’re focussing on writing better songs, maybe a bit more progressive and at the same time probably a bit more extreme. We brought in a top quality drummer at the start of the year, which has really enhanced the song-writing potential because he can play anything, so we’ve been able to push the boundaries further with more creativity and hopefully a little more originality.

Sash: What to expect: a very structured and tight Heavy Metal album, which lyrically, is based on social politics/criticism.

When can we expect to hear it?

Dave: As soon as it’s finished

You worked with legendary producer Chris Tsangarides on the last album; will you be working with him again?

Sash: Not on the upcoming album, but who knows. Maybe in the future?

Dave: Chris is a great guy, and we learned a lot working with him, but we’re not going to collaborate on this one, just to keep things fresh.

How much do you follow the current thrash scene? Are you into your label counterparts Municipal Waste and Evile?

Dave: Definitely aware of all the bands that are happening right now, and I think there’s some great bands out there, most of the more well known ones are on Earache as well, so for us it’s a big compliment to be label mates with those guys.

Sash: I am into a lot of stuff, and yes among others Thrash as well. Quite amazing how a new wave was created and success built on the new wave of thrash metal. Yeah, Municipal Waste and Evile are both very tight and catchy acts. Like them both.

How hard is it to be in a modern day metal band with relatively no money for the smaller bands?

Dave: It’s just the way it is these days, it’s a real labour of love, and it has to be. If you’re interested in making money then I wouldn’t necessarily recommend starting a band, but if you love playing metal and want to get out there, see the world and try to escape from the monotony of 9/5 existence, then nothing beats it. So even though we’ve had some really, really desperate times financially, nothing could dent my enthusiasm for guitar or for heavy metal.

Sash: 50/50, there’s always ways to finance this or that. We lived through really poor times already, but luckily not that poor, that we had to work the pavement-shift.

2011 could be a big year for Savage Messiah; what do you expect from the next 12 months?

Sash: A lot of touring, around Europe and maybe U.S (if that’s not too early yet), and, hopefully, a successful release of our new album.

Dave: I’ve tried to learn not to harbour too many expectations, as it often leads to disappointment and no one has a god given right to achievement. We are however, focussed and determined and willing to do whatever necessary to take this band to the next level, anything else will simply be in the roll of the dice.

With a new album on its way can we expect a festival appearance in the summer?

Sash: I bloody well hope so! We had to miss out on so many festivals last year, it’s frustrating. Festivals are the best places: Mixed crows, good atmosphere. The best places to make yourself known, and to enjoy Heavy Metal.

Dave: We can hope! If it was up to the band we’d play every festival, twice! But it’s up to the organisers to book us, so if they’re gonna book us, we’re gonna play.

With the year coming to a close what have been your favourite releases of 2010?

Dave: The new records by Overkill, Exodus and Death Angel have been really solid. The new Maiden is enjoyable as well. I’m still a little bit stuck in the past musically speaking, I’m always happy to stay with the classics.

Sash: Tough question, there were quite a lot. I like Ihsahn – ‘After’ a lot, quite dark, melodic with saxophone influences, good quality. Meshuggah’s – ‘Alive’ DVD was killer as well, brutal and tight. And from my old home (Germany) Rage – ‘String To a Web’ was a strong release in my opinion. And yes I know it’s been released since 2009, but the end of 2009: KISS – ‘Sonic Boom’; I think that might be my absolute favourite for 2010 as I have listened to it nearly every day.

Thanks for taking the time to answer our questions; we can’t wait to hear the new album. Good luck with 2011.

Dave: Cheers! And we send our very metal regards to all your readers out there!

Sash: Cheers for the support so far and hopefully even more in the future!

Savage Messiah are currently signed to Earache Records and you can check them out here.