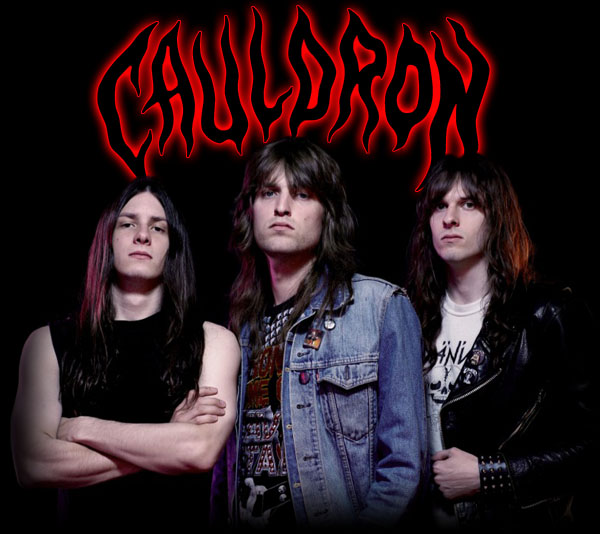 Ahead of their new album Burning Fortune – which will be released on the 14th of February – we caught up with Cauldron vocalist/bassist Jason Decay to discuss the new album, the band and what the future might bring. Enjoy!

Ross: For anyone out there who hasn’t heard of Cauldron, could you tell us what the band are about and why people should give you guys a listen?

Jason: We are what we call a 3 piece heavy metal band, from Canada. If you like real, raw heavy metal with attention to song and human pulse then you might like us.

Ross: Chained to the Nite came out back in 2009, you¹re new album Burning Fortune will be out at the end of February ­ how has the band developed since the debut? Do you feel stronger as musicians or as a unit?

Ross: You received generally positive reviews for the debut from what I’ve read. Do you expect a similar response to Burning Fortune?

Jason: Well I guess if you thought Chained to the Nite was OK then you’ll probably think Burning Fortune is better and from what I’ve seen so far it has been more positive.

Jason: Well, Chromium Dioxide is basically one of the best zines out there, at least in my opinion and the people at Earache like it very much to. They’re always looking for some sort of incentive to encourage people to buy a hard copy of the record so they suggested the idea of doing a Cauldron special edition of the magazine as a bonus with the album. We thought it was a cool idea so we pitched the idea to Phil from the mag and he was right into doing it.  It’s an honour to have a magazine, let alone one of the most addictive reads out there do a special on us.

Ross: Some people have quite negative attitudes towards traditional metal bands like Cauldron, Enforcer and White Wizzard. Where do you stand on this? Do you think you¹re regurgitating an old formula or bringing an old-school sound to a new generation?

Jason: Well, I don’t think I can sway their opinion. If they don’t like a band then they don’t like a band. We just play the music we love most regardless of what’s acceptable out there and we’ve been doing it a long time. I mean, what are we supposed to play? I don’t give a fuck what’s going on in music today and if someone assumes I should be doing that then I’d rather not play music at all. We’re fans first; we’re not playing music to make money. There are enough people out there fucking up music doing that.  If you don’t like it, don’t listen to it. I can’t change someone else’s opinion; that’s their opinion and they should have it. And fuck the word tradition.

Ross: You’ve been signed to Earache for a couple of years now, how is the relationship going with the label?

Ross: As you already know, illegal downloads are effecting every single band and artist out there. Where do you guys stand on the issue? Are you happy being heard or does it frustrate you that people are having your music for free?

Jason: I don’t really care, there’s nothing i can do about it. I personally like to own a hard copy of a record if I like it, but I guess some people don’t care as much, or couldn’t afford a record otherwise.

Ross: You’ve been in a few different bands before all coming together to form Cauldron, are you all happy now with where you are? Can we expect some longevity from the band and current line-up?

Jason: Yes I am happy where we are and we have no plans to quit or change the line-up, at least I don’t. But that is up to the individuals of course.

Ross: You’re touring up until the end of February I believe; do you have any plans after that? Maybe a tour in the UK?

Jason: We have a North American tour in the works for April and May and we are currently working on a European jaunt for August but we have no details beyond that right now.

Ross: Ok, so Cauldron has been around a couple of years now, you have two albums under your belt and having a growing following. What do you expect, or want, to achieve in the coming few years?

Jason: We’ve come not to expect anything from music, but we would like to hopefully get our band to a more comfortable level where we could afford to do it full time. We will continue to do what we do and if more people catch on then bonus. Hopefully we make it to the next record with succumbing to financial woe or health issues.

Ross: Finally, do you have anything to say to the fans out there that are reading this interview?

Ross: Thanks for taking the time to do the interview, and personally, I think the new album is a strong leap forward from the debut, and one that is growing on me. I hope the release goes well and all the best for the future of Cauldron.

Jason: Thank you, and thanks for taking the time to interview us.

The new album BURNING FORTUNE will be out on the 14th of February via Earache Records and can be pre-ordered here. If you want to know what we thought of it click here.