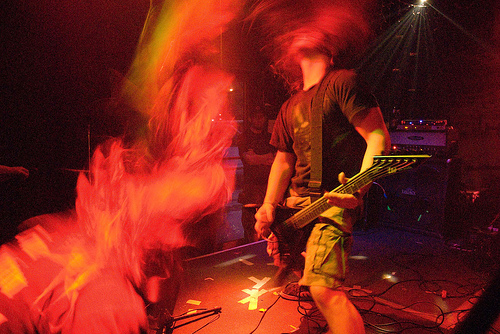 Congratulations on the new album and many thanks for taking the time out to speak us.

How did the writing process for ‘Black Rivers Flow’ go as you seem to have brought in far more new elements than I anticipated?

Yep, alot more “groove” this time thru. We wanted to diversify our music, and we achieved that, without compromising who we are as a band. Well it’s obviously an evolution. We grew as musicians, and we grew as a band. We knew we wanted to experiment in the vocal department, step up the solos, and really just write a more well thought out and heartfelt record, and I think that’s what we did. Songwriting. Piecing everything together. We really wanted to make sure that these “songs” were good “songs”. Our favorite music is the shit that you can sing your ass off too, bang your head and not want to stop. That’s what we focused on. Writing great songs, with good hooks, emotional solos, and great riffs.

The Southern Groove vibe seems more prominent on this album; did you feel yourselves being more influenced by the current wave of bands rather than beefing up the sound of the old guard?

I think you have to write honest music. Pushing boundaries, keeping traditions, these things are great, but are meaningless unless your music is from the heart. You can hear right though that sort of thing, if a band is simply going through the motions of writing a record. We definitely have a lot of old school influences, but we try to keep a modern sound, and be our own entity. How we deliver these songs, especially live, is our brand, that’s what separates us from the rest. We make sure every song we write is the best it can be. We want to write metal songs, songs that people are going to remember and want to jam to for years to come. Black Rivers Flow is a step in that direction. A lot of “bands” today, seem thrown together, awkward onstage and off, simply making music, using technology to their advantage. We are brothers, no lineup changes, Ryan and me have been playing for 3 years prior to the over 5 years Lazarus has already been rollin’ on. We have been through everything together, and when you have a machine like that, where everyone’s mindset is on the right track, you can progress even farther.

Given that ‘The Onslaught’ was such an out and out modern thrash album, were the changes in sound on ‘Black Rivers’ an attempt to reach a wider audience rather than being pigeon-holed?

We incorporate our influences, but we want to stand on our own. When we go into the studio to work on a new record it’s not like we are saying we can’t write this style or we have to write this style of music. We write what we like and if people dig it great and if they don’t they can go take a fucking leap.

Have you found a different reception to tracks from both albums when playing live and how has the album been received by the fans?

Playing your music live takes a lot more than doing just that, you have to become a part of your act, really sell the band as an entity and separate yourself from the others with your intensity on stage, your ability to interact with the crowd, and obviously executing the songs musically haha. We have a solid live show, we love to party, the beauty of Lazarus AD is that even after were done playing, our show isn’t over, in fact, that might have only been the warm-up. We party with our fans on a very consistent basis, we bring em back to our bus, bust on some classic rock, throw back a few, light up a few, and have a good time.

You have quite a distinctive guitar tone, what’s the guitar / rig set up?

ESP and EVH both those companies are great and really give me the tone I was looking for.

What have been your highlights of the current tour with Death Angel / Bonded By Blood?

It’s been really bad weather. Things have been falling apart left and right. The shows have been good, some slightly less draw due to conditions. But, financially were getting reamed. Our hitch on our bus was busted off from the weather, had to get that fixed. Hoping the weather will get better and we can move forward and play our asses off!

What are your tour bus essentials?

We only need 3 things on tour weed, beer, and an xbox…haha

What plans do you guys have for this year, any festivals on the horizon?

Touring, we are gonna hit the road hard this year and next, really focus on making an impact in this scene, and hope for the best. It’s the name of the game, and were ready to come out swinging.

Gary Holt is standing in on Guitar duty with Slayer at present, which band would you like to ‘guest’ in?

I wouldn’t mind stepping in and playing for a show or two with Metallica. It would be sick to play in front of their fans on any level.

What are you guys currently listening to?
We are listening to a lot of 70’s Rock Bands at the moment. We really dig bands from that era.

And finally, the ultimate band – who would be in it?
The four of us would be in the band. So you mine as well just say its Lazarus AD

Our review of Black Rivers Flow can be found here

You can catch Lazarus A.D in the UK next month along with Bonded By Blood.