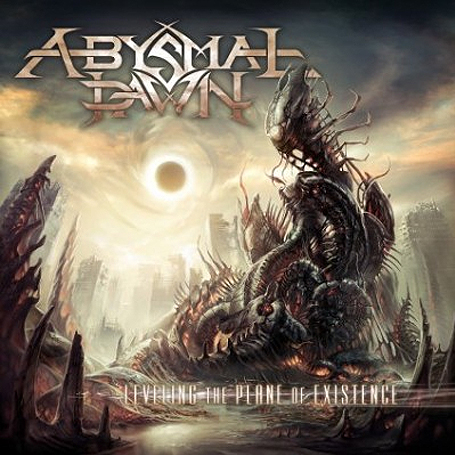 Although it’s only early in the year – and undoubtedly there are still plenty more surprises to come – but what 2011 has proven so far, much like 2010 did, is that many bands are ready to make the step up to the next level. From the retro-rock-inspired Black Spiders, to the Industrial-tinged the Defiled, from the ever increasing popularity in Djent with TesseracT to the growing popularity Architects are finding. It’s pretty clear that the new breed of heavy metal bands are stepping up to the plate and setting the bench mark high. One band who’ve seemingly set an early mark for Death Metal in 2011 is Abysmal Dawn, who, on their 3rd album, have hit on something rather special.

Taking their main influences from the crushingly technical Death and from their equally punishing peers Decrepit Birth, Abysmal Dawn have found a sound that devastates and dazzles in equal measures. Leveling the Plane of Existence showcases a stunning balance of straight-up brutality and immaculate technical flourishes, it’s very much a cross between a surgeon and a psychopathic serial killer – one minute your body is being torn to insignificant shreds and the next it’s being delicately carved with majestic precision. As well as displaying an array of brilliant, face-tearing riffs and succulent solos, Abysmal Dawn have managed to bring forceful, almost catchy vocal lines to the forefront. Combine these elements together and you have something that’ll make you salivate more than Pavlov’s dog.

With a coherent display of consistency, picking a highlight here results in a rather difficult task. Pixilated Ignorance hits an unyielding surge of sheer pace and relentless precision, My Own Savior carries a chorus that tickles the top of the shout-along mountain top and the monolithic monster that is The Sleeper Awakens plods along with inexorable aplomb. Lasting a mere 36 minutes Leveling doesn’t overstay its welcome for a second, instead, it tears through with sinister, assailing force. If you’re a fan of straight-up, manic death metal with a technical, blissful edge, then Leveling the Plane of Existence will pound your scrotal sack like a boxer using a speed bag.

For Fans of: Decrepit Birth, Death and Hate Eternal

Album Highlights: Pixilated Ignorance, My Own Savior and The Sleeper Awakens