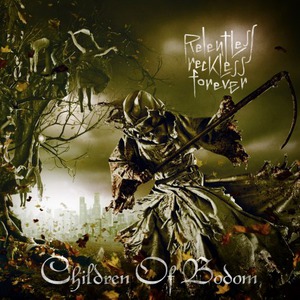 On Friday 10th December 2010, I was one of the first people in the world who was given the priviledge to officially preview the new Children of Bodom album ‘Relentless Reckless Forever’.

Upon arriving at Metropolis Studios at The Power House in Chiswick (beautiful area, full of wankers), I really had no idea what I was in for; this had been a last minute opportunity. Meeting up with some delightful fellow ‘metalhead journalists’ from Metal Rules outside, we went in and had to hand in all our recording devices and cameras; a standard practise.

In the time we waited to be called in to the studio, I took the opportunity to look at the numerous pictures, instruments and autographs dotted around the place. Metropolis Studios, and I quote;

“…have recorded & mixed some of the most classic albums of all time at Metropolis, including The Verve “Urban Hymns”, The Stone Roses “The Second Coming”, Queen “Made In Heaven” & “Innuendo”, U.N.K.L.E “Psyence Fiction”, Scott Walker “Tilt”, The Libertines “The Libertines”, and Grammy Award winners Amy Winehouse “Back To Black” & Lauryn Hill “The Miseducation of Lauryn Hill” as well as the massive Live Aid & Live 8 DVDs”.

Whilst it’s clearly obvious that anything regarding The Libertines should be disregarded, that’s an impressive repertoire of albums that have graced the studios. The artist roster is equally impressive and includes Iron Maiden. I could have happily spent hours there, maybe even disguise myself as an employee… but I again disgress.

We were called in to Studio E where they’d laid out some chairs, refreshments and a tracklist. The album was introduced as well as the admission that both the label, and the band, are well aware of the importance of this album. It’s considered that Bodom are quite literally on the edge of tipping into “The Big League”.

Being in a studi o is arguably the best place to hear an album, especially for the first time. Every note, every rhythmic splash on the drums and every solo note sounded exactly as intended and, just as I like my women, clear, tight and clean.

I could replicate my two word review of Bloodstock Open Air 2010 to summarise the album, but I will delve a little deeper; for now, at least, until I can get the album and give it another proper listen.

The first thing that was noticable was that this was noticably Children of Bodom. I know that’s pretty much a given, but from the first second of the first song you know roughly what to expect… you just don’t know how long for!

‘Not My Funeral’ is definitely a fantastic song; the usual swirling of Janne Warman’s keyboard layers the ferorious drum patterns and Alexi’s trademark vocals. I recall sitting there thinking that the rest of the album would have to go some way to top it…

Whilst ‘Shovel Knockout’ and ‘Roundtrip to Hell and Back’ were equally as impressive, and perhaps even slightly less so (as again, jaded as the decision may have been, the first track really was a humdinger), I recall making a mental note that ‘Pussyfoot Miss Suicide’ was the weakest track on the album, though with a second listen this opinion may change.

By the time the title track kicked in the room of eager pre-emptive listeners were already drooling, jotting notes or, like me, were tapping away with a rather joyous grin of the elated variety. Whilst still unmistakenly Bodom, it really does feel like ‘Relentless, Reckless Forever’ is a step-up, especially from ‘Blooddrunk’, for the Finnish masters. If anything can be said for the evidence on display after working with producer Matt Hyde it’d be along the lines that it’s actually improved the tiny lose-ends (of which they were few and far between at best anyway).

From memory, the track ‘Ugly’ opens with a chuggy Bodom-esque bass gallop that forms the backbone for the song. If it wasn’t ‘Ugly’, it was definitely on there somewhere! Another gem. However, I made another mental note about just how good a song ‘Cry of the Nihilist’ was. I even made a mark on the journey home that it was possibly the strongest song on the album, a praise I reserved for the first track up until this point. It’s another powerhouse (weahh!) of a song; pure melodic thrash metal with twinklings of sublime keyboard virtuosity and more glorious gallops than you could shake Benjamin Hur’s ranch at. It leads quite nicely into the track selected as the first single, ‘Was it Worth It?’.

Ironic, really, as by this point you will be crying and declaring that it most definitely WAS worth it, especially when you’re recalling that you actually took the day off work to listen to this for the first time! The impression given by the producer was that the song was a departure from the Children of Bodom sound and was their “most commercial offering so far”. Now, I have seen stills from the new video shoot and the crusty commercial cheese is obvious; but fortunately, this isn’t the case for the song. I am not even sure that I’d have been able to pick this out from the album as being the first single if I didn’t know beforehand; it really isn’t THAT far from what we’ve heard before. Impressive.

Which leads to the last ‘official’ track on ‘Relentless Reckless Forever’, ‘Northpole Throwdown’. Another beefcake of a song; all the usual hallmark sounds, scales and twiddles demonstrated effortlessly beforehand on every song. By this point, aware that the album was drawing to a close, I had happily determined that was this not only one of the stronger Bodom releases, it could possibly even be the BEST; some task considering how highly I rate the earlier releases, specifically ‘Hatebreeder’.

The album closes with a bonus track; a fantastic cover of ‘Party All the Time’ by the legendary Eddie Murphy and Rick James. On which releases this cover will be wasn’t clear, but I can only imagine it’ll be all of them. The Japanese will probably get another DISC knowing how these things tend to pan out… All the same, it’s the first time that a Children of Bodom song has had any ‘clean’ singing on. Who it is doing this is beyond me; it wasn’t a voice I easily reckonised and quite frankly, it could have been anyone. As I’m a gambling man, I’ll hazard a guess that it was Janne…

In mild conclusion, I would say that the most noticable thing, to me, that improved the whole album is that Alexi’s vocals seem to have been notched up a bar… Perhaps it was the quality of a studio environment but I was always disappointed that the vocals were ever so slightly less powerful on the recorded releases, but this helped shape their distinctive sound. I am keen to listen to this album again for many reasons, but to confirm if this is the case is definitely one of them!

One thing that I feel I should address is just HOW important and talented I know Janne Warman to be to the Bodom sound; as my note above suggests, whilst the band are of a high calibre of musicianship, the song structures and merits owe a lot to his quite simply breathtaking keyboard skills, reminiscent (and loosely inspired by) the genius work of Jens Johansson.

Though I will re-address this ‘review’ when I have the album in my possession to listen to properly, I don’t think much of what I’ve said will change. This truly, truly is a great album and it was a fucking honour to get the chance to listen to it before all of you.