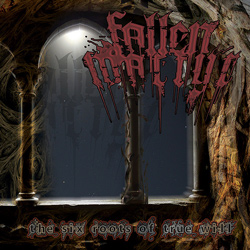 Fallen Martyr proudly present their new album – The Six Roots Of True Will. ‘If you haven’t heard this sickening record yet, which is truly a breath of fresh air in an industry so heavily saturated with less than stellar carbon copies, you are missing out on something special. This is melodic heavy metal with a traditional tinge, and just enough polish to shine it up real nice, that makes us remember why we fell in love with this wonderful heavy music in the first place.’ A bold statement indeed but does the music live up to the press release?

‘Like A Sinking Feeling’ kicks off proceedings, a furious blend of riffing and sweep picking over a barrage of drums. One word, Epic. And this continues throughout the E.P. There is no real let up, each song grabs and them immerses you into it. The level of musicianship is simply stunning, the combination of spectacular fret spanking from Gabriel Luis on every track and Jake Ford drumming like he had a gun to his head give the album it’s relentless pace. There is no shortage on the ideas front, tracks twist and turn, at times bordering on Between The Buried & Me territory. Vocals are split between clean / harsh but it is with the clean vocals that the songs really shine through. In particular the bonus track ‘Passing Through The Veil Of The Exterior World’ demonstrates what this band can be capable of. Moving between light and airy passages to crushingly heavy, the track just keeps on giving for the entire 7.39 mins.
So, back to the press release. Well it piqued my interest and I’m glad to say that I wasn’t disappointed by what I heard. There is a passion and honesty in their music, the sound of a band giving it their all. Unsigned, maybe, but surely they can’t go unnoticed on a performance like this.

Fallen Martyr – The Six Roots Of True Will is out now, self-released by the band.