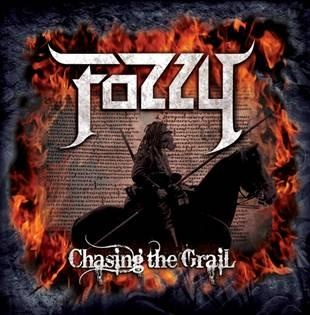 Five years after the release of their breakthrough album All That Remains, The “huge rock stars” of Fozzy, led by Chris Jericho and Stuck Mojo’s Rich Ward return with their new album Chasing The Grail, an album that has been attracting almost universal praise from all corners. What do we at Rocksins think of it? Read on to find out…

It has been remarked many times by many people that at times Chris Jericho’s voice bears more than a passing resemblance to Ozzy Osbournes. This is evident on a few songs on this album, particularly on opener Under Blackened Skies which begins the album with a hum dinger of a track.

Lead single Martyr No More is one of the finest hard rock songs you will hear all year long. The main riff is a prime example of Rich Ward’s creative abilities as it grooves and instantly makes you want to bang your head. The lyrics as well are very clever, showing how far Chris Jericho has come with his songwriting abilities. This track deserves to be played everywhere for years to come.

There are many other highlights: God Pounds His Nails is another very addictive song full of hooks that sits right on the hard rock/metal border while Broken Soul is a traditional rock ballad in the style of Aerosmith or Def Leppard. Album title track Grail is another slow burner that works exceptionally well, Let The Madness Begin is another groove based hard rock song, while Friday The 13th is pure full on metal with Chris’ voice straying into Ozzy territory again and contains drumming that wouldn’t be out of place on a Devildriver or Shadows Fall album.

Special attention must be paid to Wormwood, a 14 minute epic that closes the album and marks Fozzy’s first jaunt into the epic 10 minute plus song category. As aptly described by Chris Jericho, Wormwood isn’t really one song, its one song with 7 very distinctive parts. There is very little repetition and very recognisable section changes, in the vein of some of the other great epics like Rime Of The Ancient Mariner or A Change of Seasons. It is a fine song that has been crafted by Jericho and now departed guitarist Mike Martin and a fitting song to finish such an enjoyable album.

Is it difficult to truly categorise Fozzy and most of their albums and Chasing The Grail remains no different. They are a band who sit right on the hard rock/metal border, something that is probably a result of Jericho’s classic rock/metal taste in music (among his favourite bands are Judas Priest, Kiss and Iron Maiden). Whatever the reasoning, the blend of riffs, hooks, varying vocals and full on metal moments has allowed them to carve a niche for themselves. “No-one else is really doing what we are doing right now” is something Chris Jericho said in his interview with myself recently (that interview will be live on rocksins very soon). I would agree. However you categorise it, this is a fantastic album that in my opinion will have far ranging appeal. I would go so far as to say it is the best album I have heard so far this year. If Fozzy keep producing albums like this, they will be very huge rock stars indeed. 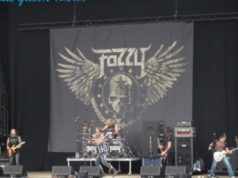