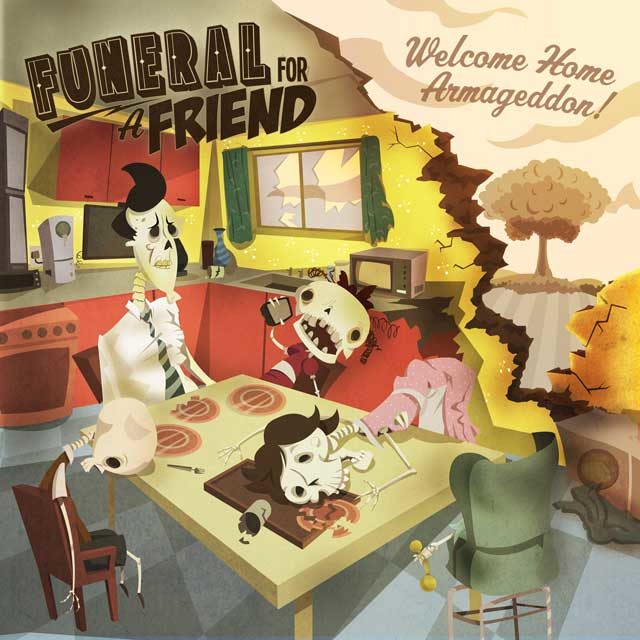 I can take or leave Funeral For A Friend. I’ve never been entirely captured with an album. It all started out promisingly enough when they brazenly introduced themselves with ‘Casually Dressed & Deep In Conversation’, followed up with the diluted radio friendly style found in ‘Hours’ which led to the release of their extremely catchy concept album ‘Tales Don’t Tell Themselves’. Both had their merits yet neither could exceed the expectations laid down by their predecessor. Somewhere along the way the original vision had become blurred. This left FFAF sounding like a band on a quest for commercial success, rather than writing the songs that had brought them together in the first place. Enter album number five, ‘Welcome Home Armageddon’. Funeral For A Friend are undeniably back and they are back with a considerable bang.

Opening with ‘This Side Of Brightness / Old Hymns’, it’s evident that FFAF have found their fire again. Featuring some of their heaviest material since ‘Casually’ they have managed to stay true to later releases yet cheekily harnessing the melodies and huge choruses of ‘Hours’ and ‘Tales’. This is the sound of a band who are enjoying playing without the pressures of delivering the next big album, consequently producing their most rounded album date. Running the risk of entering cliché territory, this release incorporates everything the band has learned and experimented with over the years, but it feels more intuitive than that. The whole album has a very natural, cohesive feel. Put simply, it works.

What is so satisfying about ‘Armageddon’ is that it doesn’t feel like a fifth album. Filled with as much inspiration, attitude and ambition as their debut, the band impress from the offset. ‘Front Row Seats To The End Of The World’ features the welcome return of drummer Ryan Richards on screaming duties to produce a rip snorter of a track reminiscent of their early influencers Skycamefalling. ‘Sixteen’ is text book FFAF: huge chorus alongside an equally huge verse, as is ‘Owls’ which flicks between softer, soothing melodies and crashing guitars. The quality is consistent throughout the album; it really is a complete body of work, anything vaguely resembling fodder has been well and truly quarantined by quality control. This is just a solid 40 minutes of premium grade, heartfelt rock.

‘Welcome Home Armageddon’ has more than enough balls and bravado to satisfy old and new fans alike. And for those of you sitting on the fence, prepare to be knocked off it. For a band that could quite easily have called it a day, this is an album seeped in euphoria, passion and optimism. It embodies the spirit of a band who are truly back at the top of their game. Welcome back, indeed.