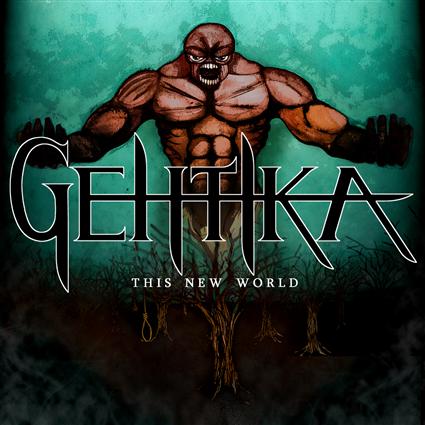 Gehtika are a band I had never heard of until this E.P. dropped into my inbox and since I’m always eager for new, unknown music, I was looking forward to giving it a spin. Gehtika are a UK band, based in Warwickshire, and have been going for around 2 years. Originally as a five piece, they’ve been a four piece since February 2010. This New World is the bands second E.P. What is it like? Read on to find out…

Gehtika have elements of many styles or sub-genres of metal in their sound, but if I was forced to put a label on them they are a promising modern thrash band with a large dose of NWOAHM thrown in. It is quickly evident that they’ve got the riffs and hooks side of things pretty well taken care of. After an intro track that would be a perfect live build up, first track Gods of Death fires off at least three quality riffs and several genuine “bang your head as hard as possible” moments. Gods of Death also serves up a nice guitar solo leading into a last 90 seconds that if one were to describe it as “fairly mental”, it would be like saying “Rammstein were pretty good at Sonisphere” – a rediculous understatement.

The Defect features nice use of the bass interchanging with guitars on the beginning of the track and features some nice drumming work through using slightly unusual timings to good effect on occasion. The mid section of this song is another guaranteed headbang-fest as more high quality riffing is jam-packed into the second half of this track (I hope Gehtika are saving some riffs for their full album)! Dead In is brimming with fierce vocals and tight riffing, any fans of Rocksins.com favourites Here Lies Affliction will love this track.

The vocals are raw (think Matt Heafy on Trivium’s first album Ember To Inferno) but fit the music very well, although they may not be everyones cup of tea. Some people will think the vocals sound unpolished but I like the rawness of it, the last thing we want in the world of metal is autotune! The only thing I am unsure about is the occasional foray into clean(ish) vocals, I’m not 100% sure if it is needed or suits Gehtika but we will see how it develops on their future material.

E.P. closer Black Tie showcases a different side of the band with a 3 minute instrumental that is really well put together and wouldn’t be out of place on something like a Red Sparowes or Chimp Spanner album and I would love to see the band develop more material of this nature based on this song.

Overall, a very promising E.P. This could be the start of some very big things to come.