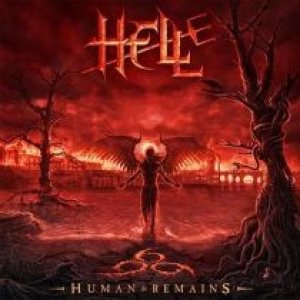 Albums like this really don’t come along too often. In an age where music is so easily accessible and consequentially disposable, it is rare to find an album that will bully its way into your eardrums, kicking out any other bands vying for your attention. Way back when, I would buy an album which would live on my turntable for the next 6 months, gradually being worn away with continual spins as I poured over the album artwork and studied the lyrics. Hell’s is an album from this generation and has effortlessly managed to bridge the time gap. For an album written in the early 80s ‘Human Remains’ makes it sounds like the years between then and now have never happened, it sounds every bit like a modern metal album. Scratch that, this is pretty much the blueprint for a heavy metal album of any era.

It’s fair to say I could get all gooey eyed and moist about ‘Human Remains’ as it is worth every single dose of praise that would be heaped upon it. I shall do my very best to not get too carried away, but I’m not promising. From the intro of ‘Overture Themes From Deathsquad’ / ‘On Earth As It Is In Hell’ it’s evident that this is something rather special. For those of you unaware of the band’s history, Hell formed back in 1982 and split in 1987 following the tragic suicide of singer/guitarist Dave Halliday. A teenage Andy Sneap, a permanent fixture on the front row of almost every show Hell played, was taught to play guitar by Halliday. Now skip forward to present day, Andy Sneap, now a legendary producer, and the remaining members of Hell have recorded what could well be the best metal album of the year, if not the past decade. See, I didn’t get carried away at all.

I can say, without shadow of a doubt, there is no weakness on this album. If you have an ounce of the metal spirit in your soul this album will connect with you. It has obviously been a labour of love for all parties involved and has been so deftly done that it is genuinely breathtaking. Rather than taking the approach of beefing up the old tracks, Hell carefully undertook a restoration and not merely upped the ante. Songs have been polished with the impeccable production of Sneap whilst remaining true to their original form, there are tweaks here and there with flourishes that embellish rather than overpower. In contrast to the many bands who try to sound ‘retro’, Hell sounds nothing of the sort and neither does it aspire to; it’s simply timeless.

I really wanted to write a piece that would try to do some justice to this album, I realise I’ll never attain that. But if you take anything from this I hope it’s the sense that Hell have produced an exquisite album that sounds better and better with every play. Finely crafted songs played incredibly well with absolutely perfect production. I’ve yet to describe the sound of the album; it’s a tad late to start now. Suffice to say that the song is king. Everything you could hope and wish for is here in abundance, glorious riffs, exhilarating solos, soaring vocals and blood pumping rhythms. Earlier, I cited that this was the blueprint for a heavy metal album. I was nearly there, ‘Human Remains’ is the benchmark for heavy metal. 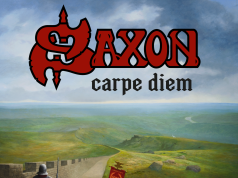