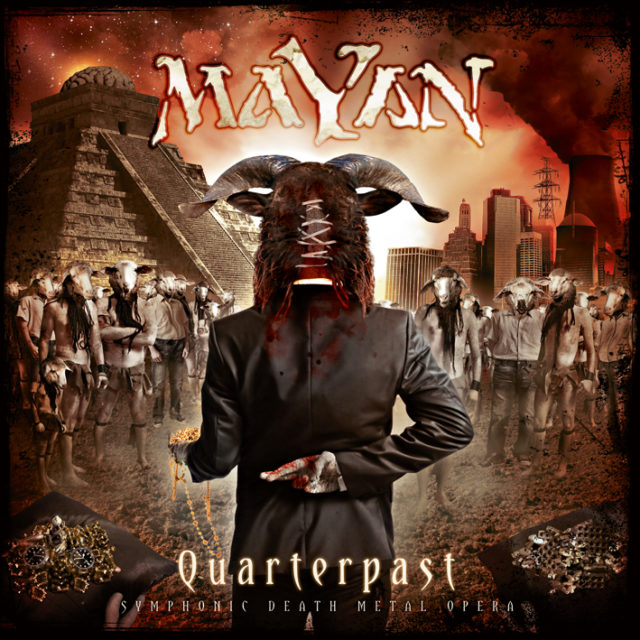 What would happen if distinctive elements of Epica, Amon Amarth, Dimmu Borgir and Skeletonwitch were thrown into a large mixing bowl, stirred around considerably and then poured into an album? You’d get something along the lines of Mayan. The new supergroup put together by Epica’s Mark Jansen and featuring other members of Epica, After Forever, Symmetry and Obscura are releasing their debut album Quarterpast on the 19th of May and Rocksins has been lucky enough to get our hands on it. Considering the individual styles and sounds of the other bands of the members of Mayan, how good is the sound of the sum of its parts? Read on to find out.

This album has a veritable smorgsaboard of hooks and sounds on offer with all songs sounding very distinctive. The drumming work of Ariën van Weesenbeek is particularly impressive throughout. There are deep, dark, ominous riffs and synths on some occasions, with fast paced Skeletonwitch-esque faster galloping guitar work in other places. At still other times for short periods you could be in the middle of an old Amon Amarth album, only seconds later to be listening to something completely contrasting. It rarely sounds anything less than very impressive.

The vocal range on offer on Quarterpast is extensive to say the least. This album brings quite a new slant on the use of growled vs clean vocals; In addition to Jansen offering vocal work similar to his performances from his other day job as frontman of Epica and Ariën van Weesenbeek’s growling from behind the drum kit the supporting cast is a plethora of skilled vocalists offering (mainly) clean vocals. The most notable of these is the other half of Jansen’s singing double act from Epica Simone Simons as well as Italian opera singer Laura Macri and several others. Both of the girls take noticable roles and their vocals are often a contrast to the music they are singing against, but it all meshes together very well.

This is certainly one of the craziest albums I have listened to in some considerable time due to its frenetic nature and the fact there is so much going on with almost every song. This is however an asset, not a complaint. An album of this kind has to be very careful not to overdo the craziness, but Mayan have the perfect balance, never sounding mental for mental’s sake. Course Of Life is an example of a quality track on the album that at times sounds like it just shouldn’t work, but is an excellently crafted song, never failing to hold ones ear whilst simultaneously sounding great amidst the madness. The Savage Massacre is another standout track that almost borders on metal opera at times, then launches back into equisite heaviness (with a touch of circus theatrics about the music at times).

I knew very little about what to expect when I first put this album on. At first, I was blown away by the sheer amount of different things taking place within each song, but after a couple of listens I could fully appreciate the different pieces of each track and the almost seamless transitions between styles in mid-song. This is unlike anything I have listened to for a very long time, and whilst I do not think everyone would appreciate it, to the right ear this will bring huge amounts of enjoyment. An album for those who are prepared to give albums at least a couple of spins for the album to grow on them, it stands unique in the releases of 2011 (or most other years for that matter) and is thoroughly enjoyable from start to finish. You think at times it shouldn’t work, but it really works very well.

Stand Out Tracks: Mainstay of Society, Course Of Life, The Savage Massacre

For Fans Of: Skeletonwitch, Dimmu Borgir, Amon Amarth, Epica, Nightwish, Fans of Symphonic Death Metal, Anyone who likes their metal a bit different

Buy Myan – Quarterpast over on play.com