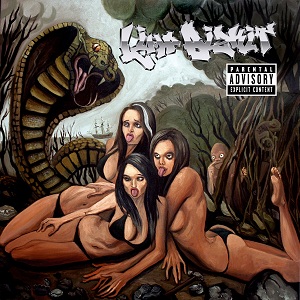 First things first, are you a Limp Bizkit fan? If your answer is no, you might as well stop reading now, this album is not for you. However, if you are a fan, and you’ve been patiently waiting for Gold Cobra since the very day Wes Borland rejoined the Jacksonville quintet, this may just be everything you ever wanted.

Fred Durst is on fine form once again as he raps, sings and screams his way though each track. His lyrics are just as outrageous as ever (“Still raining blood in the club like Slayer”). Say what you want about the man, but he has put everything he has into this album, as shown by the emotion on tracks like Loser and Walking Away.

With Wes Borland being back in the band, expectations were high. Could Borland match his performances on the ‘classic’ Bizkit albums? One listen to Gold Cobra will tell you that the answer is yes, in fact, Borland’s guitar work is possibly the best thing about this album. The riffs on Bring It Back and Why Try rank among his very best, and the solo in Shotgun is amazing.

It’s been 6 years since this bands last release, 8 years since their last full length album and a whopping 11 years since the original line up recorded together. Due to this, Gold Cobra has been hyped up a lot by the band and the fans. While Gold Cobra is a really great album, it does feel like there’s something missing. Expectations for this album were set so high it was never realistically going to meet them (Didn’t we learn our lesson with Chinese Democracy?) Nonetheless, if we forget about these ridiculously high expectations, Gold Cobra is as good if not better than anything Bizkit have released and it’s fantastic to hear this band making music together again.