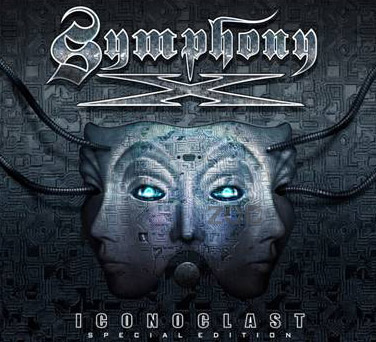 I am by no means an expert of Symphony X, having heard some of their previous albums but not having much more than passing familarity. However when the chance to review their latest offering came along I jumped at the chance, anxious for the chance to review what could be one of the power metal albums of the year and the first Symphony X record since 2007’s Paradise Lost.

The opening nine and a half minute title track of the album begins in grandiose fashion with an epic build in the music and use of choral voices something akin to some of the music associated with The Nazgul in the first Lord of The Rings film before breaking at the 2 minute mark into familar territory with a truly memorable riff (the first of many) which underpins much of the remainder of the song. The construction of the song is masterful, all the different sections fitting together to form a true power metal / prog metal classic that Dream Theater, Blind Guardian or any of their peers would have been proud of. Its an opening track of an album from a band who sound like they have a point to prove.

The musicianship on this album is superb bordering on the rediculous. I lost track of the amount of memorable riffs guaranteed to get heads banging whilst some of the solos, both in terms of length and quality are at the very highest points of skill and will likely be the equal to any other solos you hear this year from any sort of metal band. Vocalist Russell Allen performs with a much more aggressive tone than on some of the previous Symphony X albums and I think it suits them, it gives the songs an added power and dimension, especially on Iconoclast (the opening title track). The rest of the instrumental work is no less impressive than the guitars with impressive performances across the board.

In addition to the title track, there are many other standout moments; The End of Innocence has at least three top quality riffs and sounds like a surefire hit single (or as close to one as a progressive / power metal band can get to such a thing in a world of commercially produced fluff). Dehumanized sees Russell Allen channelling the spirit of Ronnie James Dio over some dark brooding guitar work, giving an impressive performance. Bastards of the Machine deserves admiration for the name alone, Heretic is a surefire headbanger and Children of a Faceless God is a more classic sounding Symphony X track meaning theres something for everyone here. The album closes with another epic, the nine minute masterpiece When All Is Lost. This is something of the opposite of the opening Iconoclast, it is something of a ballad in prog/power metal style and making great use of the keys, it has something of a Dream Theater – Learning To Live feel about it (which is a very good thing as far as I am concerned). In true power(metal) ballad style it also has a ripping solo. The two long tracks fittingly bookend Iconoclast, showcasing the diversity and quality that Symphony X can display across an album which they do in spades here.

An album like this is never going to appeal to everyone; Some people find power metal a bit too over the top or self indulgant, which can sometimes be true. However in my opinion this album walks the fine balance between top level musicality and showing off and gets it just right. The performances are so impressive they may even convert a new power metal non-believers. Symphony X have produced the power/prog album of the year thus far and I wouldn’t be surprised to see this at the very top of many peoples album of the year lists. A true cracker.