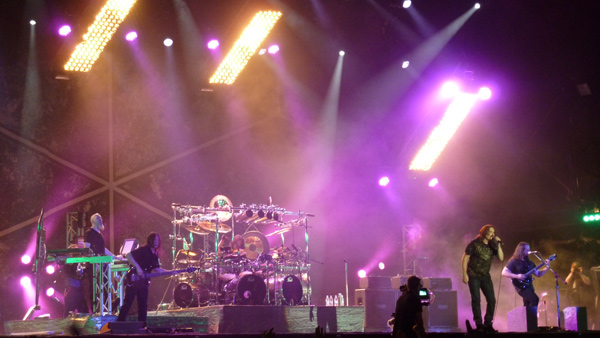 As the second and final day of the High Voltage Festival rolled out, the sun was out in force and as a result seemingly so were the people. The population of Victoria Park compared to the same time on the previous day seemed greatly increased. The first stop of the day was the Metal Hammer stage to experience Furyon in the flesh (at last). Widely regarded as one of the best unsigned bands in the country and with a quality album under their belt, it was going to be very interesting to see if they could deliver on one of the biggest shows of their career to date.

Come show time and there was a very big crowd assembled to see the Brighton boys’ major festival debut. It was the biggest crowd of the weekend on the Metal Hammer stage apart from Sylosis’, but this was probably more impressive given that they were the first band of the day. Opening with the popular Voodoo You, Furyon were on form straight from the first bar. Guitarist Chris looked to be on fine form despite this only being his second show with the band in the last few weeks, breaking his jaw three weeks ago and missing most of their recent tour. Tracks like Wasted On You and Fear Alone went down very well with the assembled masses and singer Matt’s voice sounded great right the way through the set to the closing Disappear Again, which is an awesome song to hear live.

In their half hour on the Metal Hammer stage, Furyon didn’t put a foot or note wrong. Fantastically tight and entertaining live, after having witnessed one of their performances it baffles me even further that they’re not already signed. A fantastic start to the second day of High Voltage.

After their triumphant performance, Rocksins got to catch up with Chris, Matt and Pat for a chat about their performance, their tour, getting signed and lots of other things including Cherry Bakewells. Read that exclusively here soon!

After that it was hard to see how anything was going to beat that all day long, a feeling expressed by many among the group, including our friends from the rather good website over at Cack Blabbath. Furyon’s manager Dave also stopped by for a chat afterwards, who was of the opinion that “they smashed it”. We concurred.

Something quite different was next on the order of things as we took in the previously unknown Saint Jude. They had previously played last month in Knebworth at Sonisphere but we did not manage to see them there so they were a new entity. The initial impression was something like a classic rock equivalent of Florence and The Machine, but with one major difference, Saint Jude are a proper band unlike Ms Welsh being a one woman show. Singer Lynne Jackaman has got a very impressive voice, and that’s putting it mildly. After taking a little while to warm to the band, Lynne had the whole of Victoria Park clapping along as Saint Jude put out some very well put together female fronted classic rock. It’s quite easy to see why they’ve assembled quite a famous fan club including Ronnie Wood and Jimmy Page. A breath of fresh air for the festival, if you like classic rock but want to try something different, Saint Jude are wholeheartedly recommended.

We briefly were able to take in some of Gentleman’s Pistols over at the Metal Hammer stage who sounded interesting, but then duty called, so to speak. While waiting to catch up with the Furyon lads, we were able to take in some of the experience of hearing (but not seeing) Michael Schenker (though we did leave the press area to catch a couple of minutes of Mr Schenker in person). The former Scorpion and UFO member got the loudest reaction heard thus far of the day when he led the entire festival in an enormous singalong of The Scorpion’s Rock You Like A Hurricane, which was quite frankly fantastic and I don’t imagine there were many people without smiles on their faces at that point. Unfortunately that was all we caught of Michael Schenker, but it would have been very hard to top that.

One of the most eagerly awaited events of the weekend was the one off return of British classic rock legends Thunder, making their first live appearance since their farewell at Sonisphere 2 years ago. The band were back in the groove from the word go with Danny Bowes shamelessly milking the crowd at every opportunity, not that anyone would begrudge him doing so on their first appearance in two years!

Luke Morley and Ben Matthews entered into several games of guitar “oneupmanship” to see who could outdo the other as solo’s in several songs were extended and the considerably large crowd was loving every second of it. Gimme Some Lovin’ went down particularly well and the second half of the set was like Thunder being backed by a giant chorus as The Devil Made Me Do It, Love Walked In and I Love You More Than Rock N Roll went by before the set was over all too soon with Dirty Love.

Thunder were tailor made for a festival like High Voltage and the band clearly really enjoyed themselves. Who knows if the enjoyment (and the potential money) will mean that this one off will be repeated at any time soon?

The full setlist from Thunder was:

After Thunder, we made our way to the Prog Stage to take in some of Spock’s Beard who, for lack of a better expression, really weren’t very good. On record they’ve always seemed good but unremarkable, but their performance didn’t hold our attention and one could tell by the level of noise in the crowd it was not just us suffering in this way. After around 15 minutes we decided to give up and go wait for Neurosis over at the Metal Hammer stage, so unfortunately Spock’s Beard were something of a disappointment.

At this point in the proceedings I’ll hand things over to Matt, who’s done two more in-depth reviews to finish off our band coverage of High Voltage 2011, covering our viewing experiences with Neurosis and Dream Theater.

Overall, High Voltage 2011 was an excellent festival. Having never done one of the “weekend, non camping” festivals before neither of us were quite sure what to expect, but after the initial reservations were swiftly overcome it was a great festival and fun to attend a festival that positions itself very uniquely. There is definitely nothing else quite like High Voltage (though visitors to Hard Rock Hell might dispute me, having not been we can’t argue one way or the other). I sincerely hope the festival continues to run next year, as this year was a blast.

Our respective top 3’s for the weekend were:

And with that, another festival is complete. Roll on High Voltage 2012.