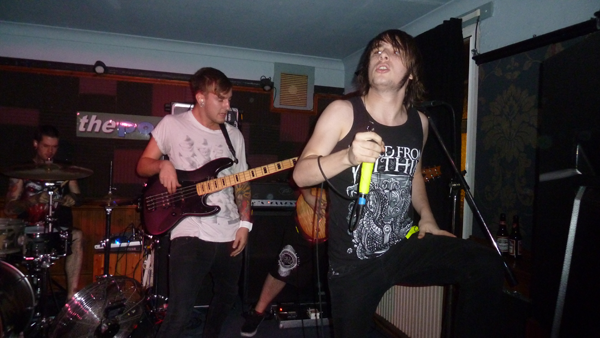 Rocksins.com likes to bring our readers live gig reviews from all sorts of bands in venues of all shapes and sizes, but this show was particularly unique for the venue. Read on to find out more.

Imagine a room about the size of your average living room. Then take away the front third of the room for a stage and equipment boxes. This is the environment that greeted the attendees at The Portland Arms for the Cambridge installment of Rise To Remain’s first ever headlining UK tour. To say it was an intimate, up close and personal venue was an understatement.

Of the four bands on the lineup this evening, openers The Howling stick out slightly compared to the other three bands. The Howling are an old school, dirty, heavy rock and roll band mixed with elements of The Prodigy (not surprising when one of their members is a former member of The Prodigy), and I thought they were absolutely fantastic. Songs like Fight Like A Champion will get a great reaction from places far bigger than The Portland Arms and singer Blacky is a very good frontman. Keep an eye out for The Howling, they could be making a big impact in the months to come.

The Safety Fire are a band I did not know much about but they garnered a good reaction from the crowd right from the start as they set about pulverising the senses with their brand of (heavily Dillinger Escape Plan influenced sounding) math metal. Vocalist Sean McWeeney decided to bring the show right to the audience as he began his performance right in the middle of the crowd and took to wandering and dancing amongst us, screaming in some faces for good measure. Their brand of metal isn’t my thing to listen to on CD/Mp3 but live they are a tremendously powerful act. Their technical musical skills are considerable, especially the guitarists who were firing out some complex solos on unusual time signatures. Even if stuff like The DEP or Meshuggah wouldn’t be your first listening choice, check out The Safety Fire live, they could surprise a lot of people, they certainly surprised me and I was very impressed.

Main support Bleed From Within are a band that I am slightly more acquainted with, having seen them support Sylosis on the Metal Hammer Razor Tour earlier in the year. Again, Bleed From Within are not really my cup of tea, and I find them somewhat repetitive as I don’t find there is that much to go with the breakdowns, and the vocals are really not my thing. That having been said, I was clearly in the minority as the now full Portland Arms sweatbox was lapping up the whole 35 minute set from the Glasgow five piece. The large gentlemen who decided that hardcore pitting in such an enclosed space however were not particularly popular with the masses, leaving everyone else hugged up against the wall while the five of them cartwheeled, air punched and fly kicked, much to the delight of BFW frontman Scott Kennedy. They previewed us a new song which showed a bit more variety compared to the existing material, but it should still very much keep their existing fans happy. Bleed From Within have great energy live and they certainly left their fans happy, but they’re not for me.

Rise To Remain are a band I’ve seen many times over the last three years, supporting all sorts of bands, as well as at Sonisphere. They’ve come a long way since then but it was going to be interesting to see how they handled being headliners for the first time. Will and Joe (RTR Guitarist and Bassist respectively) were nice enough to give me an interview before the show, so look out for that here on Rocksins very soon! Straight from the off it was clear that the band had brought their “A Game” with them to Cambridge. The Serpent and This Day Is Mine flew by with a ton of headbanging and large amounts of audience participation with Austin Dickinson sharing the microphone with at least two people in the front row. Things were so energetic one of the main speakers at the front kept getting knocked over, to the point where Austin and various members of the audience were trying to hold it up while he was singing (getting an idea of how small the room is yet?).

The set was constructed fairly evenly from their debut just released album City of Vultures and the Bridges Will Burn EP though many songs appear on both and though I couldn’t confess to knowing every song as well as most of the others in attendance, the energy and enthusiasm of the band was impossible not to get swept up in. Austin mentioned that they hadn’t played a show “where you could see every single persons face” in quite some time and how much they were enjoying it. One particular highlight was Austin and guitarist Ben Tovey going into the middle of the crowd and starting a song off while a circle pit ran around them (they lasted at least half the song before going back on stage). Recent single Nothing Left, album title track City of Vultures and Power Through Fear all went down a storm and the set closing Bridges Will Burn brought the evenings second wall of death (complete with safety reminder from Austin), this one minus the hardcore punches and fly kicks.

By the end every single person was profusely covered in sweat but everyone had smiles on their faces, particularly the band. Rise To Remain’s first trip to Cambridge was undoubtedly a success and I’m sure those packed into The Portland Arms will hope they return at some point in the future. It was also nice to see the band hanging around afterwards, taking pictures, signing autographs and chatting with the fans as not everyone does that. Overall, a fantastic night of Rock & Metal at one of the smallest venues you’re ever likely to see a “known” band in.

Rise To Remain’s Setlist was:

Rise To Remain are clearly on the up, see them on Defenders Of The Faith with Trivium and In Flames in December to see just how far they’ve come in a shot space of time. 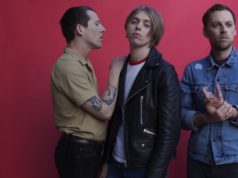