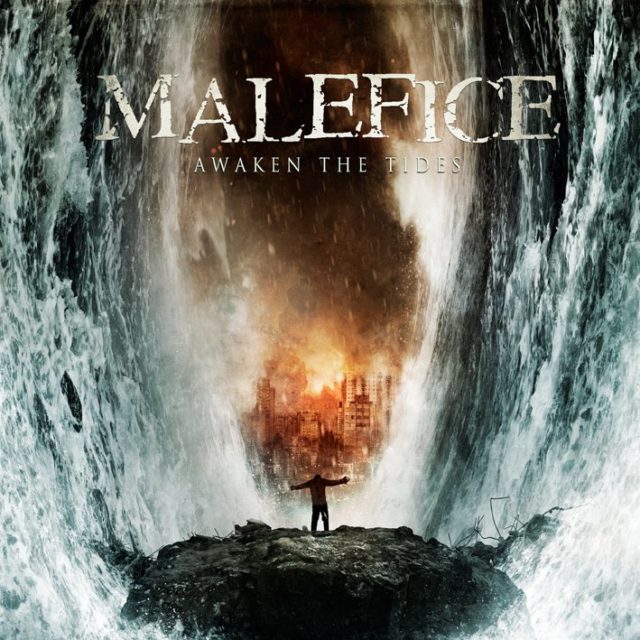 From their debut EP Relentless back in 2006 through to their last full length album Dawn of Reprisal, Malefice are a band who’s reputation, fanbase and stature in the British metal community has been steadily growing throughout the last five years. Their second full length album for Metal Blade Records, Awaken The Tides has been garnering almost universal praise from websites and magazines alike. Here’s what we at Rocksins thought of the latest offering from the Reading quintet…

To say this album starts with a bang would be criminal understatement as the title track of Awaken The Tides is one of the finest full on, pulverising heavy metal songs you’ll hear all year. Amongst the many highlights contained within Awaken The Tides 10 tracks, second song Delerium is another pummelling high speed track that doesn’t relent for a single second and in places is highly reminiscent of Chimaira at their very best. Minutes sees the band using some lighter elements such as softer guitar tones and even some almost choral like vocals in places whilst still impressively painting a mental picture of being a dark song in keeping with many of the other tracks while Baying For Blood sees the band experimenting with an almost Master Of Puppets-esque interlude section in the middle of the song and it must be said they pull it off impressively (not something that works for all bands). The Haunting closes the album in suitably epic style clocking at just shy of ten minutes long but never outstaying its welcome with its combinations of the heavy and the ambient intertwining very well. Overall, The band have added more depth and variety to their sound compared to previous albums which feels like part of their natural growth as musicians but in this case Malefice’s attempts at branching out slightly whilst still sticking to their trademark sound has produced a high quality blend of modern metal without variation for variations sake.

Malefice have always been talented musicians but the standard has been stepped up across the board on Awaken The Tides. The general sound of the band is one that sounds much tighter as a unit. Malefice have always been a band that offer exceptionally high standards in their live performances but more so than on their previous records that is something they have managed to convey on Awaken The Tides. The production values on the album are also fantastic. It is set at just the right level not to sound overly produced or “too clean” but each instrument is able to shine individually accentuating Ben xxx’s consistently impressive vocal performance. The riff work throughout is superb and there are genuinely very few moments produced by the rhythm section or the guitars that don’t make you want to bang your head either voluntarily or involuntarily (which is always the sign of a great album).

Malefice are a band who are hard to put a label on. They’re often referred to as metalcore, which I think does them a disservice as their sound in my opinion is too varied for that. Awaken The Tides does contain some elements of metalcore, but also moments of modern thrash and the odd Meshuggah esque riff or time change to name but a couple. Ultimately, regardless of how you choose to refer to them, Malefice are just heavy metal and high quality heavy metal at that. They have produced an album in Awaken The Tides that will hopefully take the band to the next level. They thoroughly deserve increased success on the back of this album as it is one of the heavy metal albums of the year. British metal is currently having one of its brightest periods ever, and Malefice are a big part of that. If you want to buy a metal album, currently there aren’t too many better choices than Awaken The Tides, you won’t regret it if you do.