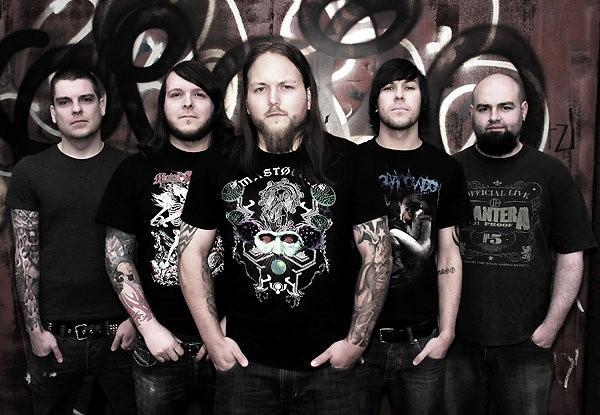 After our Scotland correspondant Sam had a brief chance to catch up with Malefice frontman Dale Butler in Glasgow, I was lucky enough to grab a few minutes with him on the last night of their tour with Sylosis, Anterior and Chapters at the Islington Academy in London (read the review of that show here). Read on for stories concerning the band’s success, touring America and Macho Man Randy Savage amongst other things…

Jamie: As usual, I’ll get the standard stuff out of the way first, it’s the last night of the tour, has it been going well for you guys?
Dale: It’s been going really well for us. It’s just been great, great turnouts every night. I think we had one dud which was Newcastle which got pulled because the PA was fucked but every night has been amazing. The kids have been showing up…fuckin’ in their numbers man, absolutely destroying it every night!
Jamie: Excellent! Has there been any one stand out show?
Dale: For us Manchester, we always have a good time in Manchester but those guys killed themselves for us and I’m sure London will be exactly the same tonight.
Jamie: With what happened to Sylosis and Anterior in Birmingham (having some of their merch stolen) I don’t imagine the feeling around that show was too good…
Dale: No it wasn’t but these things happen, it is what it is and you just have to deal with it. It’s happened, get on with it. Don’t dwell on it just get on with the next show. We didn’t have a particularly good time in Birmingham, luckily we didn’t have anything stolen but you just have to forget about it. The next night was Manchester and that was the best show of the tour, you know what I mean? Strange how things work
Jamie: Yeah, you have to take the highs with the lows
Dale: Exactly

Jamie: This is the first major UK tour since Awaken The Tides has come out and this is the last night, have you got anything else lined up now for between now and Christmas?
Dale: Yeah, we’re doing the Metal Hammer 25th anniversary birthday party here (at Islington Academy) and we’re playing that with Orange Goblin, that’s going to be fucking cool! We’ve got a few more shows with Sylosis elsewhere, I can’t tell you where you’d have to check our Facebook for that *laughs* and we’ve also got the big free Jagermeister party event with Skindred on Halloween in Birmingham, so we’re keeping nice and busy up until the new year, and soon we’ll start announcing what we are doing for 2012.
Jamie: Do you think you’ll get to the US at any point?
Dale: Yeah that’s a massive plan at the moment. Metal Blade want us out there, our management want us out there, there’s agents who want us out there, it’s just getting the right package for us and the right money. It costs a lot of fucking money to even start to think about doing it so its got to be perfect. We’re discussing some stuff at the moment so end of the year we might know a little bit more.
Jamie: Obviously if you go out there with the costs of getting yourselves out there and all your gear unless you can guarantee a certain amount of time and shows it doesn’t necessarily make any sense…
Dale: Exactly, exactly. It would cost us like ten grand just to get there with visas and flights and shipping the gear and other stuff, y’know? You have to have that in the back of your mind that before you even hire a van or start buying fuel you’re ten grand in the hole. So it has to make sense and the money’s got to work, we’re a business at the end of the day, we’re not tourists so like I said it’s just getting it together to work.

Jamie: Awaken The Tides has been out for a little while now, all the reaction to it I’ve seen has been very positive, you must be pleased?!
Dale: Very pleased and just the reaction to it live as well has been mindblowing. We’ve alwyas been a very animated band live and so have our audiences but it has stepped up another level. We’ve had people singing all the way through all the choruses and it’s been amazing. It has reitorated why we do this and we’re really proud that we’ve been able to write an album that can get that reaction from people and the press, so we’re over the moon. Malefice is a good band to be in right now.
Jamie: Well it’s always nice to hear people say that, especially at the end of the tour rather than the start.
Dale: *laughs* Yeah exactly.

Jamie: One of the guys who works for Metal Hammer has asked me to ask you a random question, are you an old school wrestling fan?
Dale: Ok, is this Merlin?
Jamie: Yep, how did you know?
Dale: *laughs* ok….
Jamie: He said to ask you, Macho Man Randy Savage or Mr Perfect?
Dale: Macho Man Randy Savage, every day, every day! There’s an old joke, we went out to India to play a festival out there and I’m walking around New Delhi in shorts, T-shirt, big aviators and this guy comes up to me and he’s badgering me and he thinks I’m Macho Man Randy Savage! *laughs* So that filtered through all the journos and everyone had a good laugh and apparently they still are! So good, cheers Merl!
Jamie: Well he’s coming tonight so you catch him then..
Dale: Yeah, I’ll spin kick him from the front row! *laughs*

Jamie: You guys played Download this year, did that go well?
Dale: Yeah it was good. It was very wet and windy as predicted, but other than that it was really good. You can’t control the weather unfortunately but we played really well and had a fucking good time. It’s always a pleasure to go back there.
Jamie: I saw you guys there in 2008 when you opened up the second stage on the concrete, that was an…interesting experience….
Dale: Some kid really dislocated his knee during our set.
Jamie: I’m not surprised there was bodies flying all over the place, tarmac’s not a good thing to land on.
Dale: It was fucking bad! But the organisers learnt their lesson and didn’t do it again. But that was a really good year, 2008 was pretty much the year we started getting noticed. We got picked up by Metal Blade as a result of that show. Download’s always held close to our hearts. We’ve played so many festivals all over the world but it’s always nice to go back to Download because that’s where it all started for us.

Jamie: I’ve seen you guys with Devildriver a couple of times and with various other bands, do you think any one of those tours in particular has been the most beneficial to you or taught you a lot about life on the road?
Dale: Any Devildriver tour. We’ve done so many and Dez has always had his arm around us and been nurturing us from quite a young age to the men we’ve become. We started touring with them when we were about 18 and a bit green, a bit wet behind the ears and we didn’t know what was really happening. He’s helped us touring with them and just being able to watch him and the way he does business has helped to make us the band we are today. So we owe pretty much everything to Dez Fefara.
Jamie: That’s a pretty big endorsement.
Dale: Yeah, well he’s not the biggest man but he’s tons of personality and he’s a big fucking presence in the industry and anyone that fucks with him gets burnt and there’s a good reason for that. The man hasn’t just done it once he’s done it twice and he’s got utmost respect in our peer group and no-one argues with him. For someone like that to give me so much respect back it means a fucking lot and I’ve listened to everything he’s told me and taken it onboard.
Jamie: Awesome. Are you excited for the Coal Chamber reunion?
Dale: Yeah! *laughs* He told me about that and I couldn’t believe it I was like “Fuckin hell mate, really? Is this really gonna happen?!”. And he was like “Yeah it’s gonna be cool”.
Jamie: I don’t know if that will make it over here or not.
Dale: I dunno, it’ll be funny if it does. It’ll be a bit of Nostalgia, no-one that wasn’t around for Coal Chamber is going to get it, at all. It’s going to be very specific, the people that get on with it
Jamie: For the ones who were there and who do get it It’d be a good time
Dale: I think it would be fucking sick, really fucking sick.

Jamie: Ok, one last question that we ask most people nowadays, are you a Simpsons fan?
Dale: Ish, yeah
Jamie: More Family Guy?
Dale: Yeah more Family Guy.
Jamie: Ok in that case, favourite Family Guy character?
Dale: I can’t remember who’s the Fucking chic, the Mexican cleaner.
Jamie: I know who you mean but I can’t remember her name.
Dale: Her. Look it up, Google it *laughs*. We met a girl in Cardiff that had her tattooed on her leg
Jamie: Brilliant
Dale: and the tattoo says “we need more lemon pledge” *laughs* and it was so amazing I took a photo of it
Jamie: Imagine being stuck with that for the rest of your life
Dale: Ah fucking hell it made my day! I was missing my girlfriend a lot that day and I saw this tattoo and I was like “unbelievable”. So yeah, her, because she makes me lol.
Jamie: Well I think that’s a great note to end on, thanks very much man!

Malefice play the Jagermeister ice cold event with Skindred, Rolo Tomassi and a bunch of other bands on Halloween night. For more tour dates please go to Malefice’s Facebook page. For lots more metal interviews and other news please check back with Rocksins regularly. 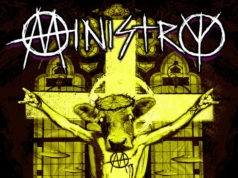