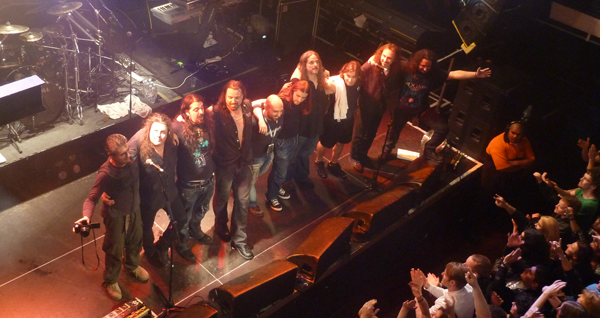 Symphony X are near the top of the tree as far as power metal or progressive metal bands are concerned. In their niche of metal they are one of the most popular and distinctive bands, only playing second fiddle to Dream Theater and one or two others. The band have built up and earnt their reputation and their fanbase over time and are regarded as a very good live act, particularly in recent years. A packed crowd inside London’s O2 Islington Academy was eagerly awaiting Symphony X’s second show in the UK capital in the last few months (the band having played in the UK as recently as March) was hoping they’d live up to their reputation.

Before the show Symphony X’s frontman Russell Allen was incredibly generous to give me a large amount of his time for an interview, an exclusive that you’ll be able to read here on Rocksins in the next couple of weeks.

Before the main event there was the entertaining warm-up band DGM, a progressive metal band from Italy. A friend of mine had told me of DGM years ago but I’d never crossed paths with them live or on record until now. DGM were solid and had some very good sounding songs. Vocalist Mark Basile was particularly impressive at times and DGM were an excellent fit to be touring with Symphony X. I wish I’d known some of the material prior to the show but they definitely showed enough to warrant a proper investigation into their back catalogue. If you like power metal or prog metal I would definitely say they are worth checking out.

With only the one support act Symphony X hit the stage pretty much bang on time (which is always a good start to a show) and set the tone for the evening by opening with the truly Magnificent Iconoclast, the title track from their new album (and one of the stand out albums of the entire year). At nearly ten minutes long some might think it a bit lengthy for an opening track in a live setting but the masses hung on every word and headbanged to every note. From the opening verse Russell Allen was putting on a clinic in how to be the perfect frontman, engaging with the crowd, displaying a stunning vocal range and looking like he was having a whale of a time. As this was “the Iconoclast tour” the albums title track gave way to The End of Innocence, one of the most popular tracks on the aforementioned Iconoclast.

Indeed, the majority of the main set was constructed from Iconoclast, with only Prometheus (I Am Alive) not getting an airing from Symphony X’s latest full length offering (at least if you have the standard edition of the album). The album is even more captivating live than it is on CD and it is difficult to pick highlights, though the album closer When All Is Lost was delivered in stunning fashion, particularly by Allen and Symphony X’s main musical maestro Michael Romeo. Bastards Of The Machine was another standout track, having probably never sounded heavier than it did tonight in Islington. Allen made several references to how impressed he was with the audience this evening and the band and crowd fed off each other all night resulting in a superb performance and levels of enjoyment from all concerned.

When the new material gave way to the old there were some renown favourites to keep the dedicated fans happy, first Inferno which was sung with gusto by virtually every single person in attendance before the main part of the set was finished off with Of Sin & Shadow. One of the noisiest crowds I have ever heard in terms of getting the band to come out for an encore, there were Symphony X chants of different varieties from the second the band disappeared through the curtain until the second they re-emerged from it.

The encore will have be satisfying for the hardcore fans, though some of the pre-encore chanting for The Odyssey went unfulfilled. What they did get was Eve of Seduction and Serpent’s Kiss before the evening closing Set The World On Fire nearly took the roof off the Islington Academy. The night ended with all the members of Symphony X joined on stage by DGM to help finish the song off and milk the applause of the ecstatically happy crowd.

The Full Symphony X Setlist Was:

Encore:
Eve of Seduction
Serpent’s Kiss
Set the World on Fire (The Lie of Lies)

Symphony X more than lived up to their reputation as a great live band; Tonight they were mesmerising and absolutely stunning at various parts of the evening. There are an awful lot of singers who could learn a ton about stage presence, owning a crowd and general frontman behaviour from watching Russell Allen. Even in some of the long instrumental sections of the songs he gets the crowd involved, shows off his considerable array of moves and general enjoys himself rarely leaving the stage and when he does only for short periods. All four other members of the band played their parts superbly. Jason … would rival almost any other drummer in the world currently going, Michael Romeo shreds easily as well as Mustaine or Petrucci to name but two and the bass and keys were both equally superb.

I have been to many metal gigs this year and this was easily up there with the best of them. A fantastic evening from a band at the height of their powers both individually and collectively, we just have to hope they return soon and don’t take the usual four years to crank out another album. If you like power metal or prog (or just good metal) and you don’t know Symphony X, check them out, you don’t know what you’re missing. 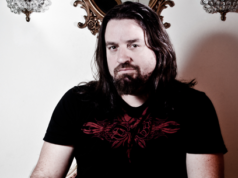 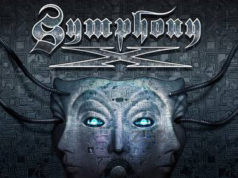