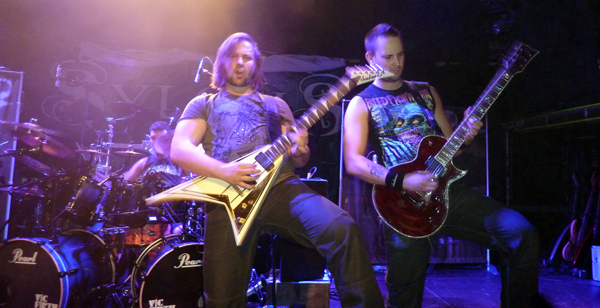 Earlier this month, Welsh metallers Anterior were on tour with fellow British metal bands Chapters, Malefice and Sylosis. After our Scottish correspondant Sam caught up with Anterior in Glasgow earlier on the tour, I was able to catch up with guitarists Steven Nixon and Leon Kemp before the final show of the tour at Islington Academy in London.

Jamie: I heard what happened to you guys in Birmingham, it was really shit I’m really sorry to hear that, did you end up losing much stuff or being too badly out of pocket from it? (Anterior along with Sylosis had some of their merchandise stolen at the Birmingham show on this tour)

Leon: I don’t actually know how much we lost…
Steven: Fortunately we never lost that much but if I’d have caught who did it, they woulda got their legs broken.

Jamie: From what people were saying it sounded like it was a pretty nasty gig with people tryin to start fights and all sorts?

Steven: I didn’t hear about fights but the last time we played the same venue we had our van broken into. They stole a 32 gig video ipod and a tomtom, the exact same venue. You see the support band, Chapters? Someone tried to break into their van while they were in it!

Jamie: I don’t suppose you want to go back there anytime soon then…

Steven: It was a good gig though.
Leon: That was a good gig, the people who came loved the gig and they were brilliant thats why its such a shame. Its just in a really bad area I think.
Steven:Birmingham’s alright man, its good. Its got a good scene especially with bands playing the academy and stuff like that, but I dunno for the time being we might hafta avoid it.

Jamie: Has the rest of the tour been good?

Steven: Aye the rest of the tour has been good, obviously there’s been hiccups here and there but thats just touring thats always going to happen. We’ve all got on really well with everyone all the four bands have been good, good turnouts people have liked us so yeah.
Leon: Great success!

Jamie: Awesome, I know you guys did the Metal Hammer Razor Tour with Sylosis back in February and I know that was your first major tour for awhile, was that a good thing for you guys to do?

Steven: Ah definitely. The thing with us and Sylosis is we’re quite similar, we appeal to similar people you know what I mean? With the style of music its not really hardcore or anything its more melodic death metal, thrash type stuff. There’s a lot of crossover between fans, every time we’ve played with Sylosis its always been really really good. Same with Malefice really, they are a little bit different but still great and the fans really enjoy all the bands, especially on this tour.

Jamie: Are you doing anything special as this is the last night of the tour, celebrating afterwards?

Steven: I gotta drive home
Leon: I don’t need to drive so I’m going to drink every single can in our fridge. I’ve heard rumours there’s meant to be an afterparty straight after the gig in the same venue.
Jamie: I know the reason it’s an early curfew here tonight is because there’s a club on in here right afterwards
Steven: Is it sponsored by Metal Hammer?

Leon: Well someone said there was an aftershow party, fingers crossed there is.
Steven: We’ll see what happens.

Jamie: Obviously this is the last day of the tour and as you said you’re going home, have you got any shows lined up for after this?

Leon: We’re doing a charity gig in Cardiff a week Sunday, its called Goatstock at Bogiez which used to be the Barfly. Its an all dayer with loads of bands playing, its for a good cause and its a good excuse to get drunk.
Steven: We’re filming a video as well for one of the tracks on the album at some point between that and going to Japan…

Leon: Aye Japan is massive. Four dates with Lazarus A.D. They’re label buddies so we’re heading out there to play a few shows with them.

Jamie: Awesome, and then back home for Christmas?

Steven: Aye, maybe try and do something between November and Christmas but it probably won’t be touring, maybe some photoshoots and videos and stuff like that. We always try and keep busy all the time because when you’re not doing anything the band’s not going anywhere. You can feel like you’re hitting your head against a brick wall sometimes.

Jamie: Well you always want to be making more fans and taking the music to new people…

Leon: As long as we’re doing something I don’t mind. Touring we’ll hit hard next year, hopefully get over to the States as well.

Jamie: I know it was quite a long time for you guys to get the album out, do you feel really satisfied that it is out there now? And that the reactions been pretty good?

Leon: Yeah, four fucking years!
Steven: Fuckin drummers! It was harsh because our drummer wanted to leave, he wasn’t really enjoying the touring and the stuff like that. We tried a few different drummers but it was always the same problem they weren’t getting it enough or they couldn’t commit enough time to the band or they weren’t really into the same style of music and you just ended up thinkin it wasn’t right if you know what I mean. It did takes us awhile but eventually we found James and I really didn’t wanna do an album with a session drummer and then find someone else because then they haven’t played on either album and then you’re going to be touring the stuff and I wouldn’t have wanted them to feel like they weren’t part of the band. I definitely think we’ve done things the right way to wait until we found the right guy

*James the drummer walks in

Steven: And here he is! *laughs*
James: Hi!
Steven: So yeah, we’re back up and running now and lets charge on.

Jamie: Well its good to have you guys back.

Leon: Its good to be back!

Leon: Well we would have played Japan, we would have liked to have toured the States…
Steven: States definitely, getting back to Europe too.
Leon: I’d love to have a big support slot in the States, that’d be immense.

Jamie: Any particular band or bands you’d like to tour with out there?

Steven: Well if the sky’s the limit you’d wanna go with as big as possible, Metallica obviously but that’s rediculous *laughs* but bands like Children of Bodom, All That Remains, bands that are similar in style to us it would be good to go over there with them. Maybe even a band like Dragonforce, Trivium…
Leon: Trivium would be amazing. You want to be maximising your potential, you know what I mean, and its the same with tours over here. You don’t wanna go on tour with Blink 182 or someone like that, there’s got to be some musicial crossover.
Steven: Hopefully as well we’ll have the next album written in twelve months so people won’t have to wait for four years *laughs*

Jamie: Do you think you’ll be looking at playing the festivals next summer?

Leon: We’re actually doing the Welsh one, Hammerfest in March, we’re confirmed for that but I’m not sure what day.
Steven: I think we’re going to try and take in quite a few festivals next year, whatever we can get. I’d love to do Sonisphere again, Bloodstock we’ve done before so it’d be nice to go there again, Download’s obviously a big one. Any of the big ones in Europe, obviously everyone wants to do Wacken, we’ll see how it goes. We’ll play anywhere!

Jamie: One last standard question that we ask everyone, are you guys Simpsons fans?

Steven: Stewey! Easy
Leon: Really?
Steven: That’s a no brainer
Leon: Peter’s pretty cool, because he reminds me of someone *laughs*
Steven: I like Stewey because he’s borderline genius, borderline insane

Jamie: Alright guys well I think thats it, thanks very much for your time.

Anterior’s newest album, Echoes Of The Fallen, is currently available on Metal Blade Records. Anterior head to Japan with Lazarus AD in November. They’re also appearing at Hammerfest IV at Prestatyn, North Wales in March 2012 which is headlined by Anthrax and Skindred. For up to the minute info on Anterior please check their Facebook page. For more metal interviews and all kinds of other news, please keep checking back with Rocksins.com on a regular basis.