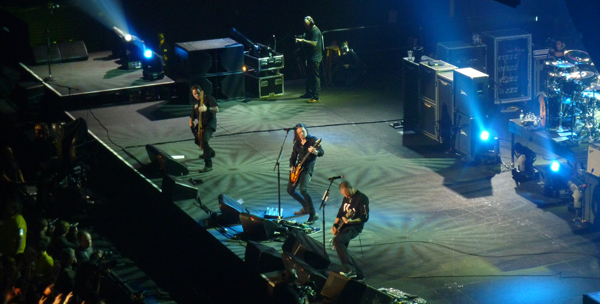 Anticipation for Alter Bridge’s Wembley Arena show had been high for a long time in the lead up to the gig. The news that broke approximately two weeks ago that the show was being recorded for Alter Bridge’s second live DVD just cranked the excitement (and the expectation levels) up even further. With this in mind Rock Sins headed down Wembley Way for this eagerly awaited evening. The early arrivals to the venue (over one and a half hours before doors) were in good spirits despite the traditional British weather being fully in force (someone was overheard remarking that it always rains in London every time Alter Bridge play) and once the doors opened the masses quickly swarmed inside. A nice touch from the band in an era of austerity and £20 band t-shirts was to have some of their older tour shirts (from the Summer 2011 festival run) available at the merch stand at half the price of the newer stuff, certainly better value for money than some of Wembley Arena’s not exactly stellar fast food.

By the time 6:45 rolled around there was already a healthy sized crowd in the arena to see opening band Theory Of A Deadman. Theory Of A Deadman are a band I didn’t know a huge amount about prior to this show but having seem them derided in certain corners of the press I was keen to form my own opinions of them. They’re an energetic band on stage with their own take on the traditional Southern American hard rock sound, using plenty of groove in their riffs and frontman Tyler Connolly has an engaging voice. They zoomed through their allocated set time of half an hour barely stopping to breathe, only stopping to allow the audience to provide some vocals on a snippet of Guns N’Roses Paradise City. Regardless of how they come across on CD, I found Theory Of A Deadman to be an entertaining live band who started the show off nicely.

Main support Black Stone Cherry had been allocated a full hour for their performance, meaning it almost felt like BSC were performing a headline set in their own right. For anyone unfamilar with Black Stone Cherry, they like Theory Of A Deadman have their roots in Southern American Rock, though I would say BSC mix it up a little bit and have more of a classic rock n roll element to their sound in places as well as the harder edge to their music. They are another band who are very energetic on stage, bassist Jon Lawhon and lead guitarist Ben Wells in particular flew around the stage, probably covering every square inch not taken up by the drum kit during the course of their performance. I did think an hour was possibly slightly too long for their part of the show but they filled it with some great songs and singer Chris Robertson knows how to work an arena sized crowd very well indeed. Musical highlights were the magnificent Things My Father Said (a song I’d not heard before and worth buying the album its on just for that song) as well as Blame It On The Boom Boom and old favourite Lonely Train (both of which caused an increasingly large circle pit to break out).

It’s important for me to point out that traditionally the South American Hard Rock scene is not usually my cup of tea, which meant prior to the show I wasn’t particularly looking forward to either support band. However both of them won me over with their energy, enthusiasm, performance level and in the case of Black Stone Cherry, having three or four top notch tunes which can form the basis of a very promising setlist. The guys in Black Stone Cherry are only young and seemingly have a tremendous future. After several months on the road with Alter Bridge on both sides of the atlantic they’ll be returning to the UK in February for their own headline tour so it will be very interesting to see how much of a success that is, on this evidence it could be a great time for them. Black Stone Cherry have the look of a band who will be around for a long time and very successful in the process.

When the lights went down and the intro to Slip To The Void blared out across Wembley Arena, the place was 98% full and it was very obvious from the crowd reaction that while there was much love for Theory Of A Deadman and in particular Black Stone Cherry, tonight was all about Alter Bridge. Myles Kennedy’s distinctive tones were on fine form from the beginning and when the drop occured in Slip To The Void the lights came up, the full band was revealed and Wembley Arena went mental. The high energy start from Alter Bridge continued as they immediately followed into Find The Real and the singalong volume went up a notch in response. Cameras and cameramen were everywhere capturing every second for the DVD and the band had certainly brought their “A game” from the word go.

Early on the band were very much letting their music do the talking, with the spectacular Ghost Of Days Gone By an early highlight as was a stormingly heavy rendition of Come To Life, the latter prompting the return of the large circle pit seen earlier during Black Stone Cherry. With the three albums under their belts now Alter Bridge have an impressive array of songs to choose from covering both ends of the rock musical spectrum (soft and heavy), with the likes of All Hope Is Gone and White Knuckles airing the heavier side of things and being greeted positively in turn by the increasingly loud assembled masses of Wembley. It was on the first dip in the relentless tempo that one of the evening’s top moments occured with Brand New Start, which has always been a song for the big stages and it never sounded more appropriate than on one of the UK’s biggest.

We were greeted with a proper hello from Myles Kennedy as he introduced Scott Phillips and Brian Marshall on the drums and bass respectively for a brilliant version of Metalingus, complete with extended intro from Scott and Brian with this eclipsing everything that had gone up to this point; The chorus especially was being belted back at Myles & co from every corner of Wembley Arena at a mighty volume. Myles promptly informed everyone how awesome the audience had been up to that point before introducing another old favourite, Broken Wings. The band’s long time guitar tech Ian was also invited to get in on the fun during the relentless One Day Remains and we were also treated to an explanation from Myles of one of the most popular tracks from the band’s most recent masterpiece AB III, Coeur D’Alene.

To this point the show had been great but things were about to go up another level as Myles dedicated Blackbird to the person who sold him his first guitar many years ago. When the album first came out I wasn’t a particular fan of the title track but hearing it in a live setting makes one realise what a stunning song it is and Wembley was mesmerised by it. The most spellbinding moment of the evening was still to follow as the rest of the band departed the stage following Blackbird leaving only Myles, a stool and an acoustic guitar. 10,000 Alter Bridge fans were then treated to an acoustic performance of Wonderful Life that flowed into Watch Over You against a backdrop of hundreds of phones and lighters held aloft at the invitation of one Myles Kennedy. His voice up to this point had been its usual wonderful self but the acoustic part was so good it is hard to find the words to do it justice. Those two songs are worth buying the DVD for just by themselves.

Anyone who thought by this point the show was winding towards a sedate conclusion was sorely mistaken as the rest of Alter Bridge returned and Mark Tremonti kicked off a sprint through the always impressive Ties That Bind (complete with two circle pits merging into one very large circle pit) before AB III’s first single Isolation brought the main part of the evening to a close. The amassed fans weren’t going anywhere though so sure enough before long Mark, Scott, Myles and Brian were back on stage and kicking off the encore with old favourite Open Your Eyes, a song that though it is seven years old has probably never sounded better. Myles thanked everyone once again for being such an awesome audience, remarking how he was “so glad they’d chosen to do the DVD here, we couldn’t have picked a better place”. Mark and Myles then engaged in a spot of six string one-upmanship. Credit to Myles for giving it a very good go, but there are few people on the planet who can hang with Mark Tremonti in a shred off and so it proved again on this occasion. Anyone who’s seen Alter Bridge live in the last three or four years knows that they always like to finish things off with Rise Today and they stuck with tradition to finish off their performance (and the DVD) in the time honoured fashion, complete with crowd mass singing of the chorus and streamer cannons to finish the night with a literal bang.

This was a triumphant night for all involved, especially Alter Bridge. This tour, of which this Wembley Arena show was the last night has seen Alter Bridge join the ranks of bands who can successfully sell a UK wide arena tour. This is not a claim that too many hard rock or metal bands can make nowadays (certainly ones that haven’t been around for 20+ years). They are a band who have improved with every album and tour to date andAB III has given them the final stepping stone to proper rock stardom (Myles Kennedy’s continuing relationship with Slash is likely to raise their profile even further).

Nights like this show why many in the industry think in a year or two Alter Bridge will be legitimate headline contenders for major festivals and further arena tours. They always put on an excellent live show and on their biggest ever headline show they delivered in spectacular style. Alter Bridge are taking a break throughout 2012 but 2013 holds the promise of a return and a new album. On this evidence it can’t come fast enough.