One of Rock Sins’ most championed bands in recent years, we are delighted to be able to announce that FOZZY, led by Chris ‘Y2J’ Jericho and “The Duke” Rich Ward have inked a worldwide recording deal with Century Media Records. Fozzy, who in addition to Jericho and Ward are comprised of guitarist Billy Grey, new bassist Paul Di Leo and drummer Frank Fontsere (also of Rich Ward’s first band Stuck Mojo) will release their first album through Century Media in the Summer of 2012.

When asked about their new record deal, Chris Jericho was understandibly very enthusiastic and had the following to say: “We are so excited and honored to be part of the Century Media family. Fozzy finally has a record company with the firepower and worldwide influence we need and deserve to rise to the next level – Century Media is the perfect home for Fozzy, and we are stoked to release the masterpiece album of our career and conquer the world… and elsewhere!”

Anyone who would like to hear Chris Jericho discuss Fozzy signing with Century Media as well as other updates can tune into the Mark & Brian morning show on LA radio station 95.5 KLOS (available to listen anywhere in the world via the Internet) at 9am PST, 12 midday EST and 5pm UK time today (Thursday, January 19, 2011). The link to listen to the show is here —> Chris Jericho on 95.5 KLOS LA Radio.

“I am honored to return to Century Media Records as they become the home for Fozzy’s music. I’m so grateful to be able to play music for a living, and it is a privilege to continue my career with the label that gave me my start.”

In an interview with Rocksins last summer Rich had commented that he hoped to have the new album out in time to hit the European festival circuit in the Summer of 2012 so all Fozzy fans should keep their eyes peeled for further announcements. Please keep checking back with Rocksins for any further Fozzy news as well as your daily dose of rock & metal news. You can also check out a brand new photo of the 2012 Fozzy lineup below: 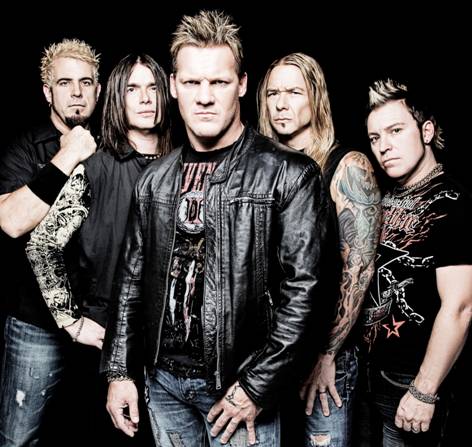