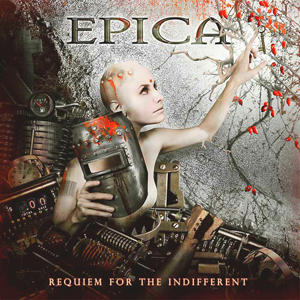 Epica are a band who on record up until this point I’ve not been too familar with, and my main knowledge of them has been seeing them support Sonata Arctica in London many years ago and vocalist Simone Simons work with one of my favourite bands Kamelot. So when Requiem For The Indifferent arrived in my (metaphorical) in-tray, I was quite excited to see the results of their hard work over the last year, particularly as I had greatly enjoyed Mark, Isaac and Simone’s side project MaYan (you can read a review of the fantastic MaYan album Quarterpast here).

The album has been written at a time where there is a lot going on in the world and lyrical themes across the album range from the global financial crisis and the conflicts in some parts of the world to more individual issues such as depression and suicide. The musical style of the album has great variety, ranging from dark and depressing sounding tracks to some more emotionally fragile sounding pieces. There are also a couple of straight up symphonic metal aggressive songs which are fast paced from start to finish. 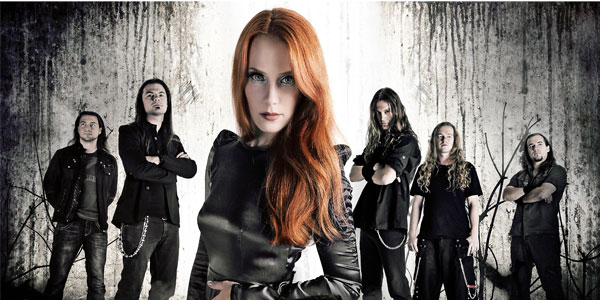 Based on my (admittedly not extensive) knowledge of the previous Epica albums Simone seems to take more of lead in the vocals, leaving Mark to make short, sharp contributions and this method seems to fit much better than on previous material that I’ve heard. Songs such as Internal Warfare allow Mark to showcase his fierce growling style vocals while others like Delirium (an excellent ballad) make full use of Simone’s extensive ability to sing multiple styles, with very stripped back instrumentation allowing her voice to carry the song. Simone also stamps her mark on more traditional symphonic metal style songs such as Storm The Sorrow, making good use of her clean vocals as opposed to the Mezzo Soprano part of her range. She’s also perfectly capable of mixing the two together in a very effective fashion such as on Guilty Demeanour.

Whether as a result of involvement with MaYan or just using a side project to recharge the batteries and refocus himself on Epica, main songwriter Mark Jansen has produced some of his finest musicial work to date. Songs and ideas have been contributed by all members of the band which has made this more of a collective effort than some of the previous Epica albums and in my opinion you can hear the benefit of that on the album. A great example of this is the first track proper after the intro Monopoly On Truth which has a headbanging inducing main riff accompanied by some brutal drumming work from Arien van Weesenbeek. All the different instrumental elements can be heard distinctively throughout this song which is rounded off with a short sharp guitar solo near the end of the song and is a sign of things to come as the album feels very well balanced.

There’s plenty more “headbang worthy” moments on the album too such as on Stay The Course which sees Arien and Mark showing off their full powers behind the drum kit and microphone respectively. Requiem For The Indifferent’s title track is also another standout song with it’s middle eastern sounding intro, some great vocals (particularly on the chorus) and a fine solo. The album finishes with a ten minute epic entitled Serenade Of Self-Destruction covering the aforementioned topic of suicide and this song shows off everything that is good about Epica with some fantastic instrumental sections and use of a choir in amongst one of the best vocal performances on the album.

Epica are not going to be everyone’s cup of tea but I think many people (including myself) who may not have previously been interested in the band will sit up and take notice of them thanks to Requiem For The Indifferent. It is an album laden with hooks, very little filler and some fantastic songs that will appeal to fans of a wide range of bands. They’re still far enough outside the mainstream metal world that if they were to play a UK festival you’re more likely to find them at Bloodstock than Download but there is a lot here that I think will win the band a lot of new fans. For me this album was a fantastically pleasant surprise and my favourite new album of 2012 thus far. A must for any fans of symphonic metal or good european style metal.

Requiem For The Indifferent is released throughout Europe on the 9th of March 2012 through Nuclear Blast Records. Epica will be on tour throughout mainland Europe during April and May 2012. For more new metal album reviews please keep checking back with Rocksins.com.