Yes, I know it’s very late, but I’ve been a bit busy with other things and keeping up with the rock & metal news to finish off this review but better late than never! Those familar with Rocksins know that instead of the traditional top X albums we like to mix it up a little bit by each giving out some individual awards for the year. So without further ado, here’s my summation of the great and the terrible from 2011.

Anyone who’s seen my top 10 albums post from my personal site will already know what my album of the year was, and in a very difficult year where there were many quality albums for me Symphony X came top of the pile with Iconoclast. Russell Allen and co have delivered the standout album of their career to date with over an hours’ worth of glorious power metal at its finest. The album is book-ended by two ten minute epics (on the non deluxe version anyway), the jaw droppingly good title track Iconoclast and When All Is Lost, one of the great metal ballads of recent times. In between those two songs there’s more fantastic riffs and bits of metal goodness than one could ever hope for on one album. Absolutely brilliant.

Whilst there were a couple of other stinkers in 2011, for me (being the most die hard Metallica fan I know next to Terry Bezer and John Beadle, good work lads) to put this monstrousity at worst album of the year really tells you something. It was summed up esquisitely by someone who simply said “even without Lou Reed the music would be the worst Metallica record to date, with him it’s an abomination”. It sounds like Reed is delivering a drug fuelled monologue while Metallica sound check in the background. If you haven’t heard it, avoid it like the plague and pick up Metallica’s Beyond Magnetic EP instead, which is back to what “proper” Metallica should sound like.

Song Of The Year: Steel Panther – Just Like Tiger Woods

There’s been some fantastic tracks this year but as soon as I heard this song for the first time I knew nothing was going to touch it as far as song of the year awards go. In true Steel Panther style it is topical (and not 100% about sex, only 95%), with a great melody and absolutely hilarious lyrics, this is one brilliant humourous song. Very honourable mentions go to Iconoclast by Symphony X, Life by Exit Ten and Darkness Within by Machine Head.

Listen to Just Like Tiger Woods here (so long as it hasn’t been taken off of YouTube that is….)

Video Of The Year: Mishkin – A Good Day To Die

I don’t watch a huge amount of music videos so this wasn’t going to be a particularly easy one to choose but much like the song of the year I knew as soon as I saw this video that this was the likely winner. Whilst not being previously familiar with Mishkin, I’m a fan of good animation, something this video has in spades and the song isn’t half bad either. Watch it for yourselves below:

An honourable mention to Public Enemy Number 1 by Megadeth, as a video consisting of Megadeth and a monkey is always going to be a winning combination. 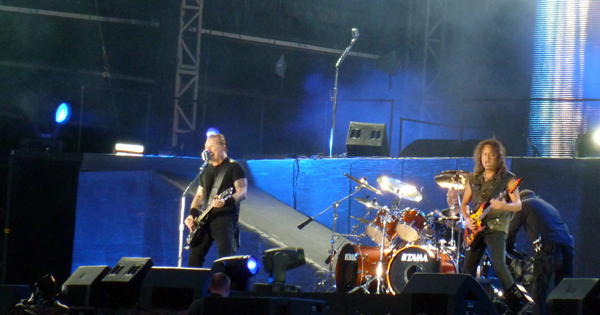 This was the holy grail as far as fans of Metallica and the big four were concerned and boy did it live up to expectations. Metallica really had to step up to the plate after fantastic performances by Megadeth and especially Slayer who were playing with a fire not witnessed in them live for years and step up they did. Any set that opens with Hit The Lights and goes straight into Master Of Puppets is going to be something truly special and indeed it was. Seeing the assembled members of the big four on stage with Diamond Head’s Brian Tatler performing Am I Evil is something that will live long in the memory. Honourable mentions go to the previously mentioned Megadeth and Slayer, but also in addition to Gojira, who were simply brilliant in the Bohemia tent on Saturday night of Sonisphere Knebworth, and also to Dream Theater for their High Voltage festival headline performance.

A gig so woefully promoted that I would have missed it but for randomly browsing ticketweb for gigs one day, upon discovering Boysetsfire’s comeback had extended itself into a trip to Europe I grabbed a ticket immediately. The atmosphere at the show was something I’ve rarely witnessed or felt and it really was a proper heroes welcome for returning favourite sons. Boysetsfire had lost none of their ferocity and it was a pleasure to see them live after so many years. There have been so many great gigs this year I will probably do a full top ten at some point (and may have changed my mind by then) but for now this tops a list of great quality shows for 2011. If you want to read a review of the Boysetsfire show you can do so here.

Band of the year: Sylosis

Where to start with Sylosis in 2011? Alex, Josh, Carl and Rob have had a fantastic year, kicking the year off by heading the Metal Hammer Razor Tour around the country and ending it with their first ever US tour and a Christmas hometown show in Reading. In between that they released their second album The Edge Of The Earth to widespread critical acclaim from the fans and the press alike, tore up the stage at various festivals around Europe including both Sonisphere and High Voltage at home in the UK, and headlined a fantastic all British metal tour around the country with Malefice, Anterior and Chapters. Buoyed on by support from Jagermeister, 2011 is the year that the mainstream press have really got behind Sylosis (Metal Hammer in particular), jumping aboard the bandwagon that certain sites on the web such as Rocksins have been on almost since day one. If Sylosis can have a 2012 anywhere near as good as their 2011 it will be a very good year for them indeed. Honourable mentions go to Alter Bridge, Dream Theater and Trivium.

Join us again in twelve months time to see what makes the best and worst of 2012 (or maybe slightly less than twelve months, hopefully this will be more timely next year).