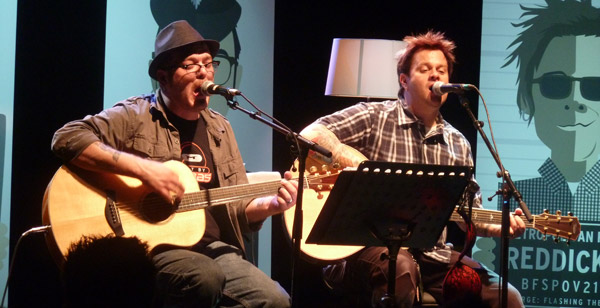 Its that time of the year again! For the third year running, Bowling For Soup singer Jaret Reddick and bassist Erik Chandler have hit the UK in late March / early April for an acoustic tour in what has become a tradition. Tonight’s show at Koko is the final night of the latest acoustic tour, with a week long run of shows having preceeded it in some locations the band don’t often get to (Southend being the previous night’s destination as a great example of this). Erik explained to the audience during the show that when asked why the tour always ends in London, he gave a very matter of fact answer: “It’s where the airport is”, logic that can’t really be argued with.

Before the main event, there were two warm up acts. As with 2011’s acoustic tour, Jaret and Erik took the decision to support themselves with….themselves. Both Erik Chandler‘s solo project and Jaret’s side project People On Vacation (with Smile Smile singer Ryan Hamilton) had released their debut EP’s at the beginning of the week to coincide with the tour so this was an ideal opportunity to promote the material live. Erik was first up and his half hour long set saw him give a very good airing of some of the songs from his excellent EP Writing The Wrongs (read the Rocksins’ review of Writing The Wrongs here) such as the fantastic Pull The Pedal as well as dipping into some material that he enjoyed listening to growing up, including a very good cover of The Lemonheads. Concluding the performance with the lead song from Writing The Wrongs, “Tonight’s The Night”, Erik showed for the second year running he’d be a very capable solo artist if the day ever comes where Bowling For Soup call it quits.

We didn’t have to wait long for People On Vacation to appear and pick up where Erik left off. Jaret and Ryan’s voices go very well together and they make an effective pairing as they air material from their new Carry On EP. Stand out moments include the pair of them almost completely losing the thread of a song when Ryan decides to drink red wine out of the bottle as Jaret was performing a solo because of the audience laughing (“I always get shit for drinking wine from the bottle in England”) and a fantastic stripped down cover of Quiet Riot’s “Come On Feel The Noise”. People On Vacation are a great act in their own right and as with Erik, I do not think would have too many problems being a main concern rather than a side project.

A Bowling For Soup acoustic show (as described by the band themselves) is something for the more hardcore fans, as Jaret and Erik like to delve into the (now considerable) song back catalogue, meaning you’re likely to lose a couple of the hits in favour of some old rarities. This is a fact that’s true even more so than on the previous two acoustic tours but this adds to the show rather than detracting from it. Hits and recognised favourites are interspersed with material not heard live from BFS for years or in some cases, maybe never in the UK. This is typified by the opening track Graduation Trip, which is the last song from most recent album last years Fishin For Woo’s, and is a song that is ideally suited for these kind of shows. The hugely underrated “I Just Wanna Be Loved” was a very welcome addition to the setlist and an airing of “2113” from debut album Rock On Honourable Ones was definitely one for the Bowling For Soup hardcore (of which there were many noisy members) in attendance.

As the show progressed, Guard My Heart was another pleasing rarity thrown in against some of the more recognisable numbers such as Emily, My Wena and Val Kilmer but the loudest reaction from the first half of the show was reserved for Ohio (Come Back To Texas) with a huge singalong and the sight of a packed Koko swaying and waving as one to the slow part of the song. Things continued in this vein when the next song was Bowling For Soup’s “adopted” hit Stacy’s Mom (which they play live because so many people think they wrote it rather than Fountains of Wayne) which worked very well in an acoustic style.

As is often the tradition, Jaret and Erik like to have a few beverages whilst performing an acoustic show. It could be this fact, combined with a lack of food consumed (a fact revealed to me by Erik when I interviewed him before the show, that exclusive interview coming here very soon) that when the banter that one expects from a live Bowling For Soup show turned onto the subject of eyebrows, Erik said he’d be up for shaving his off. Needless to say Jaret didn’t need a second invitation, a pair of clippers was fetched and moments later Bowling For Soups’ bassist was stood there with no eyebrows (as well as an unfortunate cut on his eyelid from where Jaret nicked him with the clippers). To say this was hilarious was an understatement and the entire Koko was in stitches, as well as giving Jaret a great platform for banter for the rest of the show “Hey Erik, remember earlier when you had eyebrows?” “I’m not entirely happy about this, you know I think they were holding my glasses on” was one such exchange.

Once the male grooming was out of the way, the show continued in much the same format with fan favourites such as Almost, The Bitch Song and Turbulence in amongst rarer songs like Friends O’Mine. As any regular gig goers will attest to, at metal shows, there’s always at least one person who will yell “Slllaaayyyeeerrr”. Well at the Bowling For Soup acoustic show, someone held up a sign with the Slayer logo on. What no one expected at that point was Jaret and Erik to launch into roughly a minutes worth of Raining Blood acoustic style, which is unashamedly one of the coolest things I’ve seen in a very long time (aside from Erik losing his eyebrows, sorry Erik). The always amazing “A Really Cool Dance Song” was great, and really works as an acoustic song even when you think it really shouldn’t, and the hardcore fans were pleased once again as a run through Cold Shower Tuesdays, half of Valentino and “Running From Your Dad” is the kind of live experience a Bowling For Soup fan will have not had since the early days.

As with any show that has to come to an end, we were running out of time so to finish things off there was the traditional Bowling For Soup one two punch of Girl All The Bad Guys Want & 1985 to finish the evening off in brilliant fashion once again. There was just about time for an encore involving Ryan from People On Vacation where the three of them covered The Eagles as Koko turned the lights on to finish off the acoustic tour for another year.

The full Bowling For Soup acoustic setlist was:

Regular visitors to Rocksins or my personal website will know that I’ve covered Bowling For Soup numerous times down the years and they’re arguably the most consistent live band I’ve ever seen. Whether it’s as a full band or Jaret and Erik doing the acoustic shows, Bowling For Soup do not know the meaning of a bad live performance, at least certainly not in the UK. If the acoustic tour tradition extends into a fourth year, do yourself a favour and go and see them, you won’t regret it.

For more rock & metal gig reviews such as this one, please keep checking back with Rocksins regularly. Bowling For Soup will return to the UK in October for the traditional “full band tour” with details to be announced shortly. Erik Chandler’s Writing The Wrongs EP and People On Vacation’s Carry On EP are available now through Brando Records.