We at Rocksins like to be able to bring our readers all types of metal gig reviews and Rammstein provide a live experience unlike any other musical act on the planet, never mind any other rock or metal band. There is a level of pagentry and theatre that is unmatched by any, and it is one of the reasons why they are such a popular band, being the most popular German speaking musical act of all time and one of few metal bands who can completely sell out an extensive country wide arena tour. To see them in any other type of venue other than an arena or on a massive festival stage would not do them justice, as it would deprive them the space to include many of the spectacular things that makes a Rammstein show so entertaining.

This show at Nottingham’s Capital FM Arena was absolutely no exception. After the fairly one dimensional (but mercifully short) performance from support band Deathstars the Rammstein spectacular began with the descending of a mighty bridge from the rafters of the Capital FM Arena, bellowing smoke from all sides and forming a pathway between the sound desk and the stage. Right from underneath us began an olympic style procession as the members of Rammstein, complete with flags and a burning torch marched their way through the crowd, across the bridge and onto the stage, before igniting the bowl torches on either side of the stage. This was but a sample of what lay in store for the next two hours, and they hadn’t even played a note at this stage!

For the full extensive review including photos and the setlist, please click on the link below:

Rammstein Made In Germany Tour Live Review from Nottingham 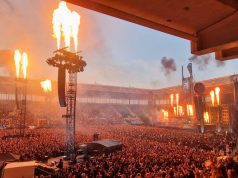