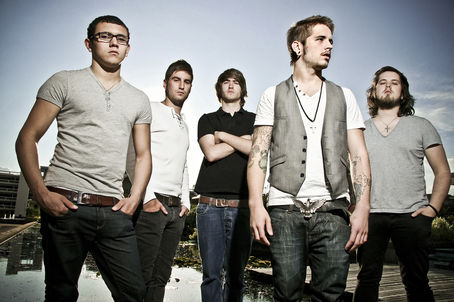 Ahead of the release of their second album and one of the most anticipated British metal records of 2012, The Union of Crowns, we chat to Bury Tomorrow’s Jason Cameron (Guitar and clean vocals). Afterwards, Bury Tomorrow went on to lay the smackdown on Glasgow’s Cathouse, you can read about that HERE.

Alright Jason, you’ve just signed to Nuclear Blast to release your new album, that must be a big deal for you guys?

Jason Cameron: MASSIVE deal dude. We’re huge fans of a lot of the bands on the label, All Shall perish, Sylosis to name a few. We’re really happy to be working with a label like Nuclear Blast. We’re stoked.

How’s the reaction been to the new songs you’ve put out?

Jason: Amazing, I thinks its shown us that a lot more people don’t know us than do, we’re playing songs like Royal Blood and Lionheart and kids are singing those back louder than the old songs off Portraits. It’s been an incredible reaction, and a bit overwhelming to be honest.

What are your hopes for the new album?

Jason: To tour it. If we can tour it as much as we did Portraits I’ll be happy. That’s basically it, we just want to play shows.

Are the new songs a fair representation of how the album sounds?

Jason: Yes. Although it is quite a diverse album. It’s 14 tracks, so with 14 trackas you’re gonna get a lot of different types of songs. There’s a lot of solos in it, a lot of ‘classic’ Bury tomorrow. The new tracks definitely show off what the album is like, but there’s a lot of surprises in there as well.

Where did the name The Union of Crowns  come from?

Jason: I’m the worst person to answer this question… The Union of Crowns is… It was Dan’s idea, he’s quite a big history fan. It’s basically saying, we’ve been away for quite a while and the title The Union of Crowns represents everyone who’s stuck by us, like in Lionheart, it for everyone who’s “had our back from the start”. It’s all  to do with all our fans coming together, we made this album for them as much as we made it for us..

Is that a theme that runs through the album?

Jason: Yeah, there’s a very regal theme, The Union of Crowns was… It was like a thing they signed which was all regal and shit?* Everyone is gonna laugh at me for this… But yeah, there is a running theme, like Portraits had a theme that was all about one thing, whereas on this each song is separate, but there is still a running theme. I think that’s important. We had a lot of fun coming up with all the names and making it have that regal feel. We’re very a very patriotic band, and we toured the states 2 or 3 times and we didn’t have many UK tours planned… the whole thing is just to show how patriotic we are about the UK and how much we love it.

*The Union of Crowns was the coronation of James IV of Scotland to the English throne and the unification of Scotland and England. Wasn’t that complicated, was it Jason?

Talking about the UK, What do you think of the metal scene in the UK right now?

Jason: It’s sick dude! It’s really really good, you have bands like While She Sleeps and Architects and Bleed from Within. When we were playing festivals 2 or 3 years ago compared to festivals this year, the line ups and the talent are a lot better. The UK is at its prime right now.

Is it hard to be noticed because of the amount of good bands?

Jason: Not really, to be honest, if any bands are getting a lot of praise right now it’s because they deserve it. If that means we have to get less praise that’s fair enough.

How would you compare the scene right now to when you started?

Jason: I’ve been in the band for 6 years and nowadays the talent is younger. When I was 18, people my age weren’t as talented as they are now. There are some bands with incredible guitarists and incredible drummers, and they are far off hitting twenty, which is ridiculous. No one has been around for a long time, but they are playing like they have been.

What does the future hold for the scene? Will any band ever break out and achieve mainstream success?

Jason: Yeah,  like, when we were doing our first video shoot I remember You Me At Six had their first ‘Introducing’ spread in Kerrang!, and I mean, look at them now, They are ridiculously big. But yeah, I think the likelihood of, in five or six years, one of the mainstream bands being a heavy band is very high. Look at America; some of the bigger bands there are heavy bands, and bands like Parkway Drive in Australia. Heavier music is becoming more acceptable.