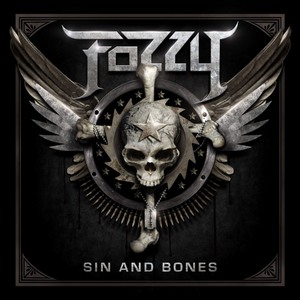 Back in 2010 I deemed Fozzy’s fourth album, Chasing The Grail, my album of the year for this website. A wonderful blend of modern hard rock and metal, it ticked all the right boxes in almost every possible way, and is still amongst my most regularly played albums over two years later. The trouble with producing an album of such quality is how to follow it, and bands with much wider global recognition than Fozzy have failed miserably to keep up with or improve on previously set high standards. Next week sees the release of Sin And Bones, Fozzy’s debut for Century Media Records, their follow up to Chasing The Grail and the answers to the question above.

A welcome hint of what was to come on Sin And Bones lay within first single “Sandpaper”, which features some guest vocals from Avenged Sevenfold singer M Shadows. The song is a trademark Fozzy style slice of rock full of groove based guitar work from Rich Ward and Billy Grey and Shadows’ vocals combine very effectively with Fozzy’s eponymous frontman Chris Jericho. It is a pleasure to say that the rest of Sin And Bones lives up to this early promise with all members of the band contributing equally to a quality ten tracks. Frank Fontsere’s meticulous pounding behind the drumkit powers the headbang inducing Blood Happens masterfully from start to finish, while a riff that could only have come from the brain of Rich Ward thunders opening track Spider In My Mouth into life after a spoken Incy Wincy Spider intro section.

Throughout their career Fozzy have shown themselves to be very adept at producing not only fast paced, fist pumping metal but some slightly slower songs and two of the highlights of the album are in this vein. Inside My Head features some of Chris Jericho’s best vocal work to date (as well as a killer solo) but (in this reviewers opinion) the standout track on the album is “A Passed Life”, a slow burner of a track reminiscent in song structure of certain classics from Iron Maiden or mid Metallica. The guitar tone on this song at times has a very Maidenesque feel to it (not surprising when numerous members of the band are huge Maiden fans), but feels in no way an imitation and it is a fantastic seven minute slice of Fozzy at their very best.

Additionally, Fozzy have always been a band who like to try out new things, and this is evident on the rediculously catchy She’s My Addiction (complete with female backing vocals), a track where Jericho, Ward and friends have channelled their inner KISS and Bon Jovi, creating a song that will lodge itself into your brain and refuse to leave. Sin And Bones concludes with another Fozzy in the vein of Chasing The Grail’s Wormword, entitled Storm The Beaches. This World War II inspired piece is Fozzy providing eleven and a half minutes of balls to the wall metal, something they’ve proven to be very good at over the last decade and Storm The Beaches continues the tradition.

Sin And Bones may not catch every listener when they first play the album in the same way that Chasing The Grail did, but repeat listens to Fozzy’s fifth album show the progression in the bands’ songwriting, as well as showcasing their continued ability to mix up a variety of styles across a relatively short number of tracks and still have the album flow very nicely. Nothing feels out of place on Sin And Bones from start to finish. The album has a very organic quality, like it has been nurtured and crafted with no elements of songs being forced into the album where they do not belong.

Fozzy started around the turn of the century as Rich Ward, Chris Jericho and a bunch of other guys jamming and mucking around. Thirteen years later, Fozzy have just produced their second album of enormous quality in a row. Chris Jericho is prioritising Fozzy over his WWE career and other commitments and the other members of the band (all of whom are involved in other projects) are all doing the same thing. With Sin And Bones, it’s easy to see why. I said two years on the Chasing The Grail review that if Fozzy continued to produce albums of this quality then they would live up to their tagline of being “Huge Rock Stars”. They now have the tools to be just that. Fozzy are a band with momentum and armed with their latest album, the only direction they can continue to head in is up.