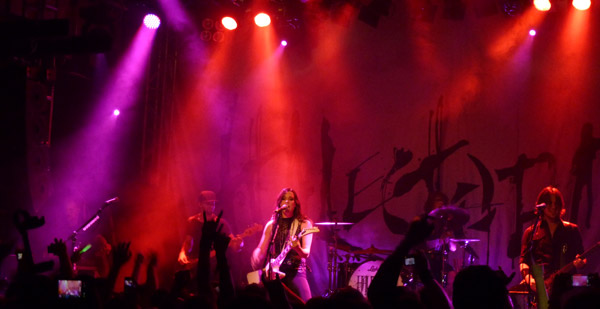 Take a sold out Islington Academy with a loud lively crowd on a Friday night in London and you have all the necessary ingredients for a superb show. Add a band who have become one of the breakout stars in the rock world of 2012 and those in attendance were pretty much guaranteed a fantastic time. Could Halestorm live up to this? You bet they could.

From the time drummer Arejay Hale arrived on stage, complete with skull bandana and freshly dyed red hair to scream “London, are you ready?!” before kicking off the opening Love Bites (So Do I), it was clear that Halestorm were not going to disappoint. The recently voted hottest woman in rock, Arejay’s sister Lzzy instantly blew away any questions of whether she sounds as good live as on record by nailing every note and pitch change and maintained these high standards for the rest of the show in seemingly effortless fashion. Indeed, Lzzy, along with Arejay, bassist Josh Smith and guitarist Joe Hottinger looked totally at ease for the entire show. They were definitely a band having a good time, with Lzzy telling those in attendance that headlining in London was a little girls’ dream come true.

With tonight’s show subject to an early curfew (an Islington Academy Friday and Saturday tradition), Halestorm wasted no time in ripping through some of the most popular tracks from their smash hit second album, The Strange Case Of, such as Mz Hyde and Freak Like Me. There was the occasional dip into the band’s first, self titled album such as It’s Not You and a fantastic rendition of Familiar Taste Of Poison but the bulk of the set was crafted around the newer material, a decision which seemed to go down very well with those in attendance.

Halestorm are also a band capable of throwing in a surprise or two, with a fantastic cover of the mighty Judas Priest’s Dissident Aggressor certainly providing the unexpected. From there on out it was hit central, with the bands breakthrough hit I Get Off being followed by an encore of I Miss The Misery and the Glee endorsed Here’s To Us sending the sold out crowd home very happy indeed.

The full Halestorm Setlist Was:

The only slight knock against the evening is that at times, the sound setup could have been a little better. During Lzzy’s cracking solo rendition of Break In, you could hear the people talking at the bar over the top of the singing, and in other parts of the venue it was also difficult to make out the vocals. These are minor technicalities which shouldn’t detract from a fantastic evening. Those who have seen Halestorm on this, their first UK headline tour (which completely sold out) are extremely lucky. It is highly unlikely they will ever be in such small venues ever again.

For more live rock & metal gig reviews such as this one, please keep checking back with Rocksins.com. Please also keep checking in with us as we were able to conduct an exclusive interview with Halestorm bassist Josh Smith before the show, and that will be available exclusively here very soon!