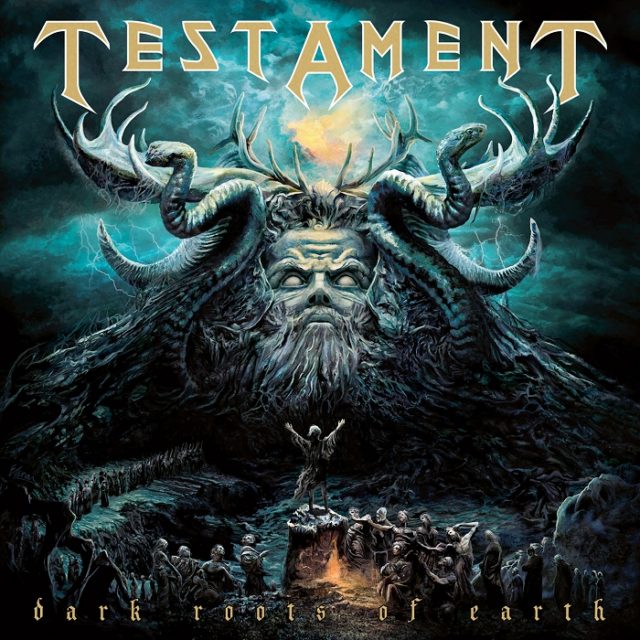 It’s been over four years since bay area thrash legends Testament released one of the best albums of their career so far, The Formation of Damnation. They have now returned with The Dark Roots Of Earth, released on the awesome Nuclear Blast Records, and expectations for this album were very high indeed.

The opening song of Testament’s tenth studio album to date, ‘Rise Up’ goes straight for the jugular with a gloriously thrashy riff. Singer Chuck Billy’s overwhelming enthusiasm leaps from the speakers as he exhorts “When I say rise up! You say war!”

As opener ‘Rise Up’ proves and then some, that what ‘Dark Roots of Earth’ does best is unleash monumental, fist-pumping, thrash metal anthems such as ‘True American Hate’ – a song that rumbles ever onwards like a particularly vitriolic Sherman tank, or ‘A Day In The Death’ which kicks off with a deliciously sinister bass riff before manifesting itself in a veritable feast of winding riffs and Billy’s signature vocal patterns.

There is something primal and instinctive about the way each successive riff and wild-eyed exhort to the masses from Billy crunches home with neck-mangling intensity before flying headfirst into yet another finger-mangling Skolnick solo.

To all intents and purposes ‘Dark Roots’ is the sound of Testament blowing widely acclaimed earlier effort – ‘Formation of Damnation’ out of the water (and into low orbit) unfortunately though, the second half of ‘Dark Roots…’ can’t quite match the exceptional standards of the first.  An eight minute ballad – ‘Cold Embrace’ has sucked the albums momentum away by the time the song plods its way to an eventual conclusion and ‘Throne of Thorns,’ while not quite as dull still feels flaccid and overblown at seven minutes long.

Despite this, ‘Dark Roots…’ remains a very strong album, continuing Testament’s great run of form started on 2008’s ‘Formation of Damnation.’ It is only on ‘Throne of Thorns’ and ‘Cold Embrace’ that the high standards of ‘Dark Roots’ stumble. It may not have surpassed the total and utter brilliance of Kreator’s latest effort but ‘Dark Roots of Earth’ is still great – especially considering that it’s Testament’s tenth album – and they additionally had the unenviable task of following up ‘Formation of Damnation’ on this latest offering.