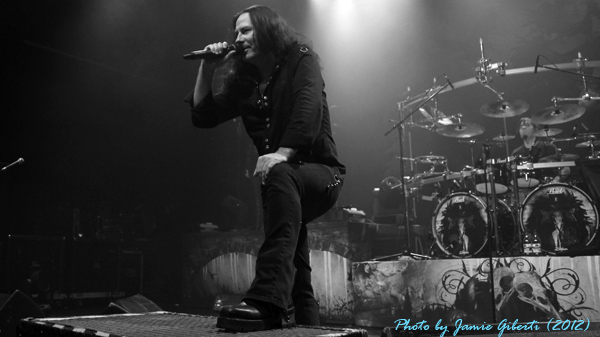 Kamelot are a band who don’t get to the UK very often, and opportunities to sit down with one of their members for an interview come by even less frequently. So when Rocksins’ were offered the chance to have a chat with Kamelot founding member and guitar supremo Thomas Youngblood, we said yes before you could say power metal. Jamie caught up with Thomas in the dressing room at The Forum in Kentish Town, a couple of hours before their show in London a couple of weeks ago. Topics of discussion included the band’s touring habits in the UK, upcoming plans and of course the band’s new singer Tommy Karevik. Read on for the full lowdown…

Jamie: Well first of all, welcome back to London!

Thomas: Thanks very much.

Jamie: The obvious question to begin with, how has the tour gone so far?

Thomas: It’s been great. The first couple of shows have sold out, there’s a lot of bands touring at this time of the year so we’re happy with the turnouts and the crowds have been amazing. The reponse to the new songs for example has been fantastic so I have no complaints so far!

Jamie: When Kamelot have come over to the UK on previous trips you’ve tended to just play a one off show in London, or one time you did Sheffield and London, do you think at some point in the future you’ll look at doing a full UK tour?

Thomas: Yeah I think that’d be great. We want to be able to play a bigger show in the main cities like London first because I think the promoters look for that first before they start expanding. But let’s see what happens; I’d like to do a full UK tour. I’d like to do full tours in certain other countries too, like Norway for example, add more cities there instead of just doing Oslo, but it all depends a lot on promoters, not only the will of the band. The promoters have to be out there and willing to support it.

Jamie: When you were here on your last run obviously you had Fabio (Lione, from Rhapsody) singing for you but Tommy (Karevik, new Kamelot singer) was out on the road with you as well and at the show he did Center Of The Universe. Was that something of a tour wide audition?

Thomas: In a way. I kinda thought he would probably do more songs but at the time I wanted to make sure it wasn’t an audition tour, that we put on a show that we felt the fans deserved for the money they paid. We could’ve make it a full audition kinda thing but we just had him do a certain song here and there like EdenEcho, Centre, Human Stain. He did a great job every night and then when he came in to work on the album, we based a lot of the decisions on the vocals for what would really fit Kamelot and he was perfect for that.

Jamie: Was much of the new album already written by the time Tommy permanently joined the band?

Thomas: I’d say about half of the music, and then we were working on music once he was officially in. It was probably 60-70 percent of the music was done but all the vocal melodies and all of the lyrics, he worked on with Sasha so his stamp is all over the album.

Jamie: At what point did you guys get together and say “Yeah I think he is the right guy”?

Thomas: We kinda thought he would be from the beginning but we wanted to hear how he would sound on the new material. He’s got another band and it’s quite different, it’s more progressive and the melodies are quite different, they’re more in major keys and things like that so once we sent him a couple of songs and he came back with some really amazing stuff we were like ok this is definitely the guy.

Jamie: Was there never a point you thought Fabio would be the long term solution?

Thomas: We talked about it. There was most definitely discussions and we tried out some stuff with new songs but his voice is just so connected to Rhapsody and we talked about that as well. And of course Rhapsody are still going strong, they’re still working on a new album, probably now, and I think there would have been too many conflicts. So I think they have a lot of work to do to make sure they make a great record again with Luca not being part of the songwriting now.

Jamie: On the subject of his other band, is Tommy carrying on with Seventh Wonder?

Thomas: Yeah, I think they’re working on new material. They don’t tour a whole lot and he understands the priorities but it’s something that I think is important, not just for him but Oliver has his own band and Casey has a band back in Florida and it’s good people can have a different outlet and not be consumed with Kamelot like I am *laughs*. It’s too much!
Jamie: I guess someone has to be the full time captain of the ship.
Thomas: Yeah, I think after a couple of years from now I’m gonna take a little break but until then it’s all one hundred percent Kamelot.

Jamie: Obviously Tommy has come in and replaced someone who was a very distinct member of the band and Roy was very well known and coming into that situation would have quite a lot of pressure associated with it and also a certain level of expectation from the fans, do you think he’s coped with it well?

Thomas: Oh totally, the fans love him. Anybody that’s come to the show unless they’re really just ignoring it to be….I’m not sure how to put it..
Jamie: Set in their ways?
Thomas: Yeah, or just won’t admit or they’re not ready to admit that Roy walked away from this, and it’s time to move on. To me the show is more dynamic, the guy can sing anything, his stage presence is killer. It’s been great, the first show we did was in the Czech Republic at Masters of Rock Festival with thirty thousand people and he just totally kicked ass. From that point on he’s been the man.

Jamie: Something that you’ve already touched on; Was it important for you to get someone who was stylistically fairly close to what you had before but could also bring something new at the same time.

Thomas: That’s exactly what I was going for because it’s the kind of vocals I like anyway, the sort of Jeff Tait style from when I was a kid. When he first came in I felt like it was a familiar sound that I really wanted for Kamelot and to me it doesn’t makes sense if there are singers out there already to try to reinvent the band..
Jamie: Like in a Nightwish type of situation?
Thomas: Yeah I mean that’s fine for them, and it actually worked to a certain degree, but for me, really the only changes that we could have done would be to go more “power metal” vocals and that’s not what I personally like so it makes no sense.

Jamie: Do you have any concrete plans for 2013 or anything past the current European tour?

Thomas: Yeah we’re gonna do another European tour probably in the spring next year, then we’re going to do a US headlining tour in May, and hopefully by September we’re going to announce a live DVD concert shoot. Not sure where that is going to be yet but that’s our immediate plans for now.
Jamie: Is there any chance of you ending up at Bloodstock or Download or any of the festivals in the UK?
Thomas: No, right now we’re not taking too many offers for festivals because we really want to take the Summer off and for a lot of the guys it’s the only time they have off.
Jamie: Fair enough.
Thomas: If the offers are right and we could put together enough festivals for it to make sense to fly over then we’d probably do it. But the biggest issue with us, I mean this year alone I’ve probably flown to Europe seven or eight times including the festivals and recording the record. The coolest thing would be if we lived here we could do the festivals and it’d be simple and fun and then go home, it’s a little more complicated for festivals but it depends on what we could string together and if it makes sense financially.

Jamie: One last question which we wrap up with on most of our interviews, I don’t know if you’re a Simpsons fan or not?

Thomas: A long time ago I used to be!
Jamie: We always ask everyone who their favourite character is.
Thomas: Umm…..no I’m thinking Family Guy.
Jamie: We always say if you don’t do The Simpsons then Family Guy is the backup option.
Thomas: Who’s the dude who’s always saying giggity on Family Guy?
Jamie: Quagmire?
Thomas: Quagmire. He’s fucking hilarious, my guitar tech in the US, we’re always doing little Family Guy bits, so yeah he’s my favourite character if we’re going for those two shows.

Jamie: Great! Thanks very much.
Thomas: No problem.

Kamelot’s new album Silverthorn is out now on Steamhammer/SPV Records. For more interviews such as this with metal’s finest artists and band members, please keep checking back with Rocksins.com regularly. 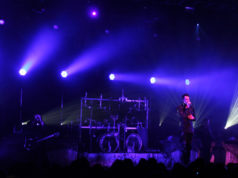 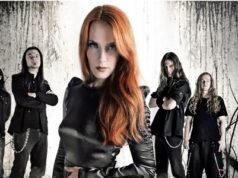