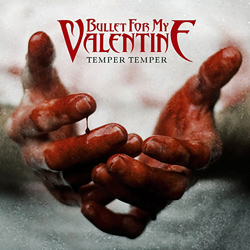 Bullet For My Valentine are always a band that are going to divide, and have done since debut album ‘The Poison’ propelled them to mainstream success. Last album, Fever delivered punchy and hard hitting metal songs that held a distinct appeal for the mainstream. However, it often feels as though Bullet have taken the formula too far on Temper Temper – where Fever stayed simple, punchy and streamlined on ‘Temper Temper’ Matt Tuck and co blast out clumsy riff after clumsy riff – none of which particularly stick in your brain like “classic” Bullet should do.

Songs like ‘Riot’ sounds more akin to browsing the frozen food section of your local Sainsbury’s than an actual riot as the band vainly bash away at the same two note riff whilst the lyrics to the title track sound painfully contrived – “It feels good when you lose control,” – a theme that repeats itself over the album. Tuck’s trademark lyrics are just as, if not more horrendous than on previous efforts as he croons “Your invitation, it doesn’t exist, So tell me why you keep crashing the party” on ‘Leech’.

It says a lot about Temper Temper that the best track by far is ‘Tear’s Don’t Fall Part Two’ – which is, to all intent and purpose a lesser version of ‘Tears Don’t Fall’ (as implied by the name!) A decent enough chorus and a shreddy solo fit in-between the chord structure in the verses that I’m sure I’ve heard somewhere before… However, Bullet sounding somewhat competent only lasts for the duration of this song, then it’s back to the standard fodder of Temper Temper with the perhaps mistakenly named ‘Livin’ Life (on the edge of a knife)’ a track that, if possible, makes ‘Riot’ sound, well, quite menacing!

If there’s one positive thing to take away from ‘Temper Temper’ (other than that Bullet are really quite good at rehashing old songs to make new ones) it is that the soloing on this album still sounds great. Tracks like ‘Riot’ and ‘Breaking Point’ begin to sound vaguely enjoyable during their frenetic fret mangling solo’s. At the end of the day though ‘Temper Temper’ sounds like Bullet playing it far too safe. Where Fever was slick, punchy and streamlined, ‘Temper Temper’ sounds like its awkward younger brother, always trying to show off to the big boys how cool they are, but just making themselves look increasingly ridiculous the harder they try.