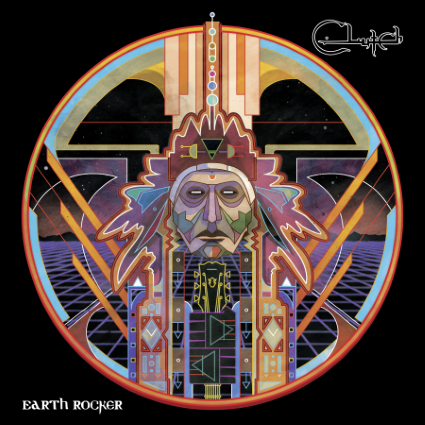 The esteemed director Quentin Tarantino recently commented that it doesn’t matter how each of his individual films are received, but how his whole body of work is considered. It’s also true of bands. One poor album can consign you to the scrapheap even if you’ve put out gem after gem previously.

The rope around Clutch’s neck is far looser than many of their contemporaries after a phenomenal level of consistency over their two decade long career. Although that’s not to say that some might have been a bit concerned after the patchy ‘From Beale Street To Oblivion’ album was followed up by ‘Strange Cousins From The West’, a record that replaced much of their fury and thick, buzz saw riffs with a slower, bluesier, stripped down approached. It’s taking this into consideration that makes ‘Earth Rocker’ such a fist pumping, high fiving triumph, as it sounds exactly as Clutch do in your dreams.

It begins with the title track and, in 211 seconds, any fears that this isn’t going to be classic Clutch have been put in tied up, driven to a remote location and incinerated by a nuclear warhead. A driving, swaggering, full bloodied banger that is raised from great to incredible due to Neil Fallon sounding like a redneck Screaming Jay Hawkins. It’s a bit Motorhead, a bit Kyuss, but unmistakably Clutch. ‘Terminal Velocity’ and ‘Mister Freedom’ follow and match what has gone so far step for step. This is no mere rehash of past glories though, as fourth track ‘DC Sound Attack’ continues the previous records boogie-blues hybrid and comes complete with cowbell and harmonica high in the mix. On and on it goes, with every passing track the realisation that there isn’t going to be a dip in quality, that they may have made an album that sits comfortably with the best of their career becomes more and more inevitable. From ‘Gone Cold’s trippy Tom Waits vibe, to ‘The Face’s doomy fire and brimstone it’s an album that only contains highlights.

The whole band play a blinder, Tim Sult’s snoring is probably better than most bands riffs and Jean-Paul Gaster plays simple rock drumming as extravagantly as any Jazz fusion sticksman, but special mention should go to Neil Fallon. As usual his mixture of demented preacher speaking in tongues mixed with no frills blue collar rocker is what sets them apart from the competition. Although just who is competing with them is hard to tell, such is the dexterity of their music.

It’s probably too early to start calling this the best album of Clutch’s career, but let’s just say that if it was a Tarantino movie it would be Pulp Fiction, with Kill Bill’s fight sequences, Reservoir Dogs cool and with a cameo from Inglorious Basterds Col. Hans Landa. In other words, all the best stuff from some people with a lot of good stuff. The Earth will be rocking for a long time thanks to this.