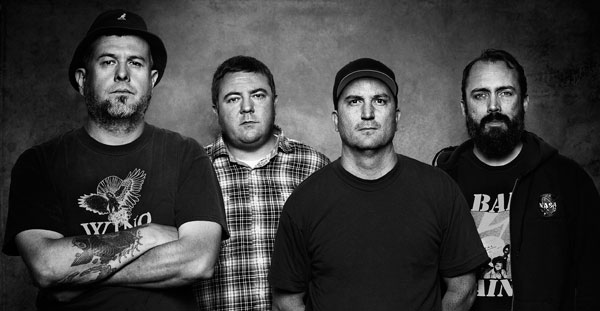 For two decades now Maryland rockers Clutch have been one of the most consistently evolving and intriguing bands in Rock. With a career best album, Earth Rocker, in the pipeline ready to drop we chatted to drummer Jean Paul Gaster ahead of their one off, sold out show at London’s Koko to talk about set list democracy, not being Limp Bizkit and… um… Elephants.

Rocksins – Hey Jean Paul, the new album is great. It sounds like a total distillation of everything that makes Clutch great, was that a conscious decision? To revisit all of your past albums?

Jean Paul – I don’t think we really listened to our old albums. After being together for so long, we we’ve played a lot of shows and made a lot of records, you start to develop your own voice. We kinda sound like what we sound like. But we did set out to make a powerful record, a record with a lot of energy. Unlike previous records we actually sat down and talked about the sort of album that we wanted to make, we always just sort of jammed and whatever came out were the songs that ended up on the record. We still did do that, but this time we made a conscious effort to make sure that the songs really packed a punch. And I think we succeeded.

Rocksins – No arguing there. As you said yourself, you’re quite a jam band. So how quickly did these set of songs come together?

Jean Paul – Well we actually started writing straight after ‘Strange Cousins…’. Usually we come off tour and just jam and, don’t really try and put songs together just ideas, those jams become the building blocks for the songs that you heard on the record. So in that respect it was the same as our other records, the difference was the kind of songs that we were trying to write and the different parts that we chose. We wanted to make a record with a lot of energy that would translate live.

Rocksins – And, speaking of playing live, you guys are one of those bands where an audience member will turn up to a show and have no idea what they might hear that night. How and when do you guys decide on a setlist?

Jean Paul – Actually we have a system that we developed, pretty early on in the band, we each take turns in choosing the set every night. We go in alphabetical order in order of first name, I don’t know where we came up with that concept, but that’s how we do it. The idea was that we would have a larger variety of songs to pool from and it would keep things fresh.

Rocksins – Doesn’t anyone ever kick up a fuss? What if you really don’t feel like playing something that night?

Rocksins – Total democracy, good for you. That must be quite daunting though, turning up and not knowing which of the hundreds of songs you’ve got are going to be played that evening?

Jean Paul – There are hundreds, I don’t even know how many, songs, but it’s become part of the mentality. You have to be prepared for just about anything, and that keeps the shows fresh. If the guys onstage are engaged and into what’s happening then it’s going to make for a better set. If the audience can see it’s real then it makes for a better show, rather than a band running through the same set and saying the same things between songs. I hate that part of Rock and Roll.

Rocksins – Me too. Hopefully we’ll be seeing that show over here for a full UK tour soon?

Jean Paul – Oh yeah, we should be coming over for shows and festivals. That’s another thing with this record, we thought about, not just live crowds, but festival crowds and how they would react to the songs.

Rocksins – And when should we be expecting you?

Rocksins – That’s a pretty good clue as to what festival you’ll be playing then. I wanted to talk a little bit about Neil’s lyrics. I’m assuming he writes all of the lyrics?

Rocksins – How do you guys get to meld his, very descriptive lyrics, into your music so well?

Jean Paul – Well I know Neil spends a tremendous amount of time on lyrics, what words he is going to say and exactly how he is going to say them. When we start writing it’s just vocal ideas and melodies, there are no lyrics as such. Which is really helpful to us, we pay more attention to that than we ever have. Especially on this record where we the vocals are very important, it’s all about the vocals and how do we support the vocals.

Rocksins – has he ever brought you anything where you just think “How are we going to fit this into a song?”

Jean Paul – No, that has never happened. We do a lot of the demoing at the studio in my basement and he’ll bring in a line or a vocal melody and I still get goosebumps when I hear a new vocal idea. It’s exciting still after this many records.

Rocksins – You’ve spoken before about having no problem if people download your music from a financial point of view, but as a band that spend so much time and effort on packaging and artwork, what about from an artistic view?

Jean Paul – Part of that equation is that we run our own label now, so we’re more aware of how elaborate packaging can affect your bottom line. With the artwork for ‘Strange Cousins…’ for example, no matter how kick ass that package was, it was really expensive to put together and reproduce. It was very time consuming. So the artwork on ‘Earth Rocker’ is a little more straight forward as the guts of the thing goes. So that’s one part of it. The other part is that we’re fortunate that our fans may download the music but I think they are the sort of folks that will buy the record, I think our fans are the sort of people that want the real version of the music.

Rocksins – Never tempted to just put out a blank CD with ‘Clutch’ written on it then?

Jean Paul – We would never do that. I know I like to have something cool in my hands as part of the experience and that’s very important to us.

Rocksins – Good man. If I can take you back to the 90’s you guys toured with all sorts of bands, everyone from Slayer to Limp Bizkit, do you think it harmed you at all not being part of a very recognisable ‘scene’ like those bands?

Jean Paul – No, by the time the Nu-Metal scene came around we had already realised that we didn’t fit any of those genres. They had already called us Hardcore, Industrial, Grunge, Stoner or whatever; we never really wanted to be part of any genre or scene. It was probably a blessing in disguise for us. The 90’s were a really tough time, we were fighting with labels and I’m sure they would have loved for us to be part of Rap-Metal or Nu-Metal or whatever was going on at the time. They would have had an easier job marketing us but we may have faded away quickly, as these things tend to do.

Rocksins – Yeah, that’s true. So is there any source of frustration at people’s inability to pigeonhole you? Do you feel that may have held you back at all?

Jean Paul – Yeah to some degree, sure. It would have been easier if they could have put a tag on us and you’d walk into the record store and see ‘If you like this then you’ll like this’, but that was all part of the struggle and I think we had to do all of those things to get where we are now.

Rocksins – And you’ve outlived almost all of those bands, that must be incredibly gratifying to know your music can stand the test of time.

Jean Paul – At the end of the day all you have is your recordings, they live on long after you. I don’t know if any of our albums will be perceived as any of the great albums, like an ‘Are You Experienced?’ or a ‘Volume. 4’, but those are documents and they are going to stick around for a long time. The music around it might change and I think the music of ten or twenty years’ time will influence how people think of our music.

Rocksins – So how do you view your back catalogue today? Any one album that you take particular pride in?

Jean Paul – The self-titled record was a very important record for us, we found a sound and started to find our voice. For a long time I had a bad relationship with ‘Pure Rock Fury’…

Jean Paul – Yeah, that was a really tough record to put together. That was the last one we did for a major label, there was a lot of headaches involved as we had just resigned to Atlantic, which is pretty much unheard of, and there was a lot of drama surrounding the recording of that album. Not from the band but from record company people. So I had kind of a bad feeling about it, but just recently it’s started popping up on my I-Pod shuffle and it’s funny how those parts of the record you weren’t so sure about go away and your just left with the jams.

Rocksins – So if you could plonk yourself on the drumstool for one gig for any band. Who? Where? And when?

Rocksins – It’s Brad Wilk from Rage Against The Machine doing it now right?

Jean Paul – Yeah, that makes me very curious to hear what that record sounds like. I basically learnt to play drums listening to Black Sabbath, I remember very clearly skipping school, going home and putting on my Walkman listening to ‘Paranoid’ side 2. So in that respect Black Sabbath is very important to me.

Rocksins – So I take it that it’s you, Geezer, Tony and Ozzy? Or Dio?

Jean Paul – Oh I love those records too. From a drumming stand point those are different kinds of records, more focussed on the vocal. Those early records are really special, each player has such a identifiable voice and approach to what they are doing which was totally unique to what was going on at the time.

Rocksins – They certainly did. Finally, if, as you claim on the ‘Beale Street To Oblivion’ album, European journalists are “Devious little Monkeys” then what animal are Clutch?

Rocksins – Great stuff, thanks for chatting.

Earth Rocker is released on March 19th on Weathermaker. To read our review of Clutch’s excellent sold out gig at Koko please use this link.