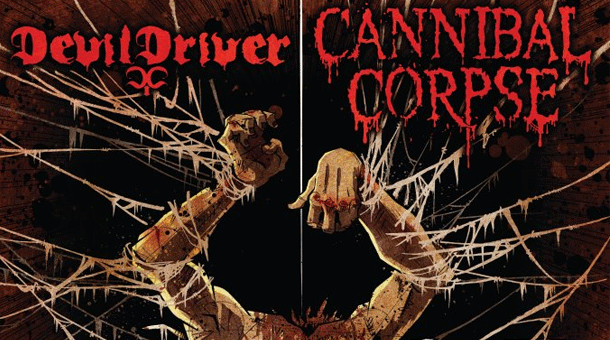 When the Devildriver and Cannibal Corpse co-headliner bill rolled into town we just had to go and check out what this great bill had to offer – The Black Dahlia Murder supporting just made this already great gig that bit more enticing.

Hours of Penance (6) open up tonight’s bill of metal heavyweights – unfortunately an impenetrable sound system helped along by the bands thick, impenetrable style of technical riffing coupled with the generally scarce turnout – and apathy of those who have, means that Hours Of Penance set is a bit of a damp squib, which is a shame as theres real potential amongst this potent mix of death metal and grindcore.

An apathetic audience however, is not something that The Black Dahlia Murder (7) can complain of, although the band start slowly – again, hampered by muddy sound they’ve hit their grin-inducing stride by the third song. Is it coincidence that this is also the point of the set at which singer, Trevor removes his shirt? This probably isn’t a question you need (or want) to ask yourself because at the end of the day it doesn’t really matter when they’re dropping tunes like ‘What a Horrible Night to Have a Curse’ and ‘Moonlight Equilibrium.’

Grin-inducing is not, however, a word that you’d associate with Cannibal Corpse’s (9.5) magnificently brutal set. The Floridian veterans are, without a shadow of a doubt the band of the evening. Newer material sounds particularly good tonight with a particularly brutal rendition of ‘Scourge of Iron’ early on in the set. Cannibal Corpse offer no pretensions – you get what you see – five genuinely passionate musicians playing some of the best Death Metal songs recorded, and, in some cases sounding even better than they do on record. Of course, the best is saved till last and, in Cannibal Corpses case the best means a triple whammy of ‘Make Them Suffer,’ ‘Hammer Smashed Face,’ and ‘Stripped Raped and Strangled.’

The crowd has thinned a little bit by the time Devildriver (7) take to the stage with their, by now standard opener of ‘End of the Line.’ The first half of Devildriver’s set is decent enough with the band taking full advantage of their back catalogue to keep the heads banging – bassist Chris Towning even clambers on top of his bass amp which sways perilously during Meet the Wretched. Unfortunately, Devildriver’s set is far from a triumph – the sound during the second half of their set is distinctly muddy and robs the songs of much of their impact. Following Cannibal Corpse is, additionally, a huge challenge and one that would be difficult for Devildriver even with a crystal clear sound. That’s not to diminish Devildriver’s performance – they still put in a solid performance tonight  – and probably the best that they could have done, considering they’re following Cannibal Corpse and competing with a sound system that’s been a problem all night.

While tonight perhaps didn’t quite live up to its potential – largely as a result of The Forum’s sound issues tonight we were still treated to an absolutely pulverising set from Cannibal Corpse, and Devildriver, whilst not quite as good still played an entertaining enough set. Be sure to catch both bands next time they’re over in the UK – for Devildriver it’ll be Bloodstock in August.