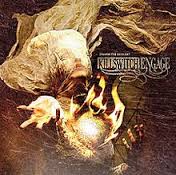 Overall Score: 8/10 Return To Form: 8/10 Anthemic Choruses: 9/10 New Ideas: 7/10 Pros: A Total Return To The Full Glory Of Previous Albums Cons: Tails Off Towards The End Of The Record

When a much loved band claim to return to their roots it’s usually the sign of desperation, an admission of a lukewarm response to recent material or an attempt to recapture the attention of a dwindling fan base. In the case of Killswitch Engage it could well be all three. As great as some of the Howard Jones-era material was the self-titled album of 2009 was an utter turkey, Jones himself seemingly in the band one minute and out the next during its touring cycle and clearly losing all enthusiasm for the job in hand on the few occasions he was present.

The initial response to the re-recruitment of original frontman Jesse Leach was immediately positive from long term fans and it intensified when KSE played a total blinder of a set at Download last year, but this is the acid test. This will determine whether the decision was a stroke of genius or an ill-advised final roll of the dice. Your fears are partially put to bed by the end of opening track The Hell In Me, it’s prime, good old fashioned melodic Metalcore the way that Killswitch used to play it. Double time blasting drums, savage guitar riffing and a vocal performance that veers between fire breathing intensity and epic sing a long melodies. You’ve heard it before, not just from this band either, but no one has perfected the sound quite as well.

If that start had whetted your appetite the next four have you daring to dream that this could be the best album of KSE’s career. All of them are bullet proof Metallic bangers and, especially in the case of fourth track In Due Time, feature some of the most instantly memorable choruses that they have ever put their name to. Songs like New Awakening and Tribute To The Fallen crush as hard as Killswitch ever have, it’s enough to make you forget that the past nine years have ever happened and remember a time when Metalcore felt fresh, new and exciting.

Jess fits the band like your favourite slipper, instantly comforting and easy to forget you ever could ever have had anything else. It’s like he’s never been away, yet you realise how much they’ve missed him. He adds a gravitas and realness to all of the songs on this album in a way that his predecessor occasionally lacked. The tone and clarity of his voice the perfect accompaniment to Adam D’s effortlessly beguiling licks, squeals and melodies.

If it sounds too good to be true then the second half of the album does dip in quality slightly. No End In Sight and Always are fairly standard, by the book tracks that would have been fine on the self-titled record, but seem slightly weedy in comparison to what they are surrounded by here.

Still, Disarm The Descent is a worthy comeback. If what you wanted over the last six or so years was a classic, rejuvenated Killswitch Engage, then you’ve got it. Whether it still packs as much of a punch in 2013 as it would have done in 2004 is debatable, but surely this is too good to put them on the nostalgia circuit just yet.

The new Killswitch Engage album, Disarm The Descent is released on the 2nd of April 2013 through Roadrunner Records.