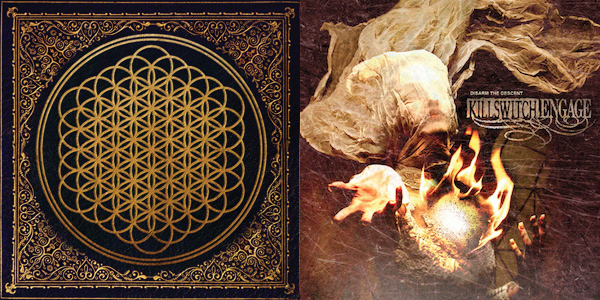 Today is one of the most exciting days in the 2013 metal calendar. Not only were there a few April Fools jokes played today (the best one we saw was the one about the Bring Me The Horizon sandpit turtle – we kinda wish that one was true) but two of the most anticipated metal albums of the year were released today.

Now, they may not be bringing out a sandpit, but Bring Me The Horizon’s “Sempiternal” is one of the most eagerly awaited albums of 2013. It’s been previewed, it’s been leaked, it’s been legitimately streamed online, it’s spawned two cracking singles in Shadow Moses and Anti-Vist and now finally Sempiternal is available to the masses for CD and download purchases. Sempiternal is also Bring Me The Horizon’s first release for their new record label RCA. There is a tremendous amount of interest in how well this album does, so if you’re a fan of Oli Sykes and co, go out and support BMTH by buying the album in whatever form.

Not as close to home as Bring Me The Horizon, but just as wanted by many is the new album from Killswitch Engage “Disarm The Descent”. Featuring original singer Jesse Leach on vocal duty for the first time since their breakthrough album Alive Or Just Breathing, fans are hoping that Jesse’s return will restore Killswitch to the height of their powers. Our reviewer Stephen certainly enjoyed it for the most part when he reviewed it for us (read the review here). Disarm The Descent is released through Killswitch Engage’s long time record label Roadrunner Records.

So what are you waiting for? Go out and pick up two of the most anticipated albums of 2013 and support metal, both homegrown and from across the pond. For the latest metal news, please stay tuned to Rocksins.com.