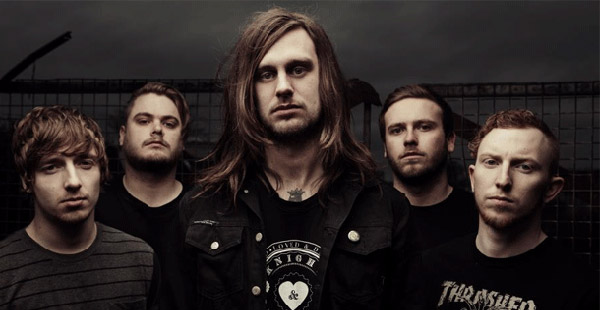 First up are Dead Harts (7) who play a great set of well-constructed hardcore tunes that nicely warms the crowd up for what is to follow. Feed the Rhino (9) who follow are nothing short of astonishing. The band hurl themselves around the venue with a manic fury, especially frontman Lee Tobin who seems to have a phobia of stages… Tobin ends a domineering performance by getting the entire crowd to sit down on the ground and “jump the fuck up” – Slipknot style. If Feed The Rhino can continue to give such strong performances – and based on the fact that they headlined this very venue a few months ago they will soon be moving onto bigger and better things. It wouldn’t be surprising to see them sell out somewhere like The Underworld on their next tour.

If Feed the Rhino seemed at home in such a small venue While She Sleeps’ (9.5) performance feels too big for such a small venue. Accustomed, by now to be playing larger venues such as Brixton, Sleeps stagecraft and music has developed far and beyond the level they were at a mere two years ago supporting Sylosis at the Camden Underworld. The pit is in full swing by the end of opener ‘Death Toll’ and by the end of ‘Hearts Aside Our Horses’ the stage divers are flying onto the first few rows in a thick, and steady stream.

The intensity from WSS is kept at a steady standard throughout the night; they may only have an album and an E.P released but While She Sleeps already have a wealth of quality material to draw upon. This is something that becomes clear when thinking about all the songs that weren’t included in tonight’s set – both ‘Until the Death’ and ‘Be(lie)ve’ are omitted from tonight’s set.

Tonight has proved, beyond all doubt that Sleeps can only keep getting bigger, the sheer calibre of their performance tonight dispels any thoughts that they’ve gotten “too big, too fast.” It will be a treat seeing Sleeps when they begin to headline larger venues in their own right – and it will only be a matter of time before this happens.

While She Sleeps setlist

Death Toll
This Is The Six
Our Courage, Our Cancer
The North Stands For Nothing
Hearts Aside Our Horses
False Freedom
Satisfied in Suffering
Crows
Dead Behind The Eyes
Seven Hills 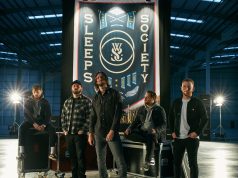