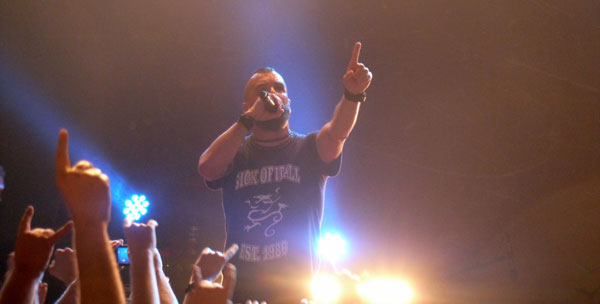 Killswitch Engage’s first UK tour since reuniting with Jesse Leach was always going to be a very big deal. Add in quality support from UK modern thrashers Sylosis and the fact the entire tour sold out was not surprising in the slightest. Keen to get in on the fun, several members of Team Rocksins were in attendance for the London date of the tour at Shepherds Bush Empire.

Opening proceedings were Killswitch Engage’s Roadrunner Records label mates Heartist (4). They played well, with a very tight live sound (in particular from drummer Matt Marquez) but there was not anything distinctive about Heartist’s sound to pick them out from the rather bloated pack of new metalcore bands all doing very similar things. They have only just released their debut E.P so there’s plenty of time for things to improve but on this occasion Rocksins were not sold on Heartist.

Main support Sylosis (8) were another proposition altogether. Not wasting any time, the Reading foursome came out and launched into recent single Fear The World and a crunching rendition of Sands Of Time. There were quite a few Sylosis shirt-wearing fans in attendance, and plenty of headbanging going on but that wasn’t good enough for Josh Middleton who demanded improvements in audience participation a couple of times. Thanks to songs like Stained Humanity, the always brutal Teras and the rifftastic Altered States Of Consciousness, the ever present circle pit built nicely over the course of their forty five minute set culminating in a pile up during Altered States, surely one (slightly unfortunate) marker of any good moshpit.

Sylosis’ most recent album Monolith has added variety and depth to what was already a fantastic sound, with songs like the more deliberate, chuggy All Is Not Well equally well received as the faster numbers. The now traditional Empyreal finished off proceedings and what was a very entertaining set from one of our brightest homegrown metal bands. Headlining venues like this in their own right should be their target in the next couple of years.

Whilst the majority clearly enjoyed Sylosis, the reaction for Killswitch Engage (10) was absolutely deafening. Wheel out every used gig review cliche about bands being treated like returning heroes, imagine it was written ten times in a row and you wouldn’t even come close. This was a gig where almost everyone in attendance to a man or woman knew the words to every single song.

Wisely opening with Disarm The Descent’s opener The Hell In Me, the Empire exploded in a sea of movement that continued for the rest of the show. Every word of The Hell In Me was sung back to the back at a vociferous level, which then cranked up another level as Killswitch carried straight on into A Bid Farewell.

Mixing Jesse era material both new and old with favourites from Howard Jones’ time and three albums in Killswitch Engage is something the band have balanced superbly, with songs like Life To Lifeless (which saw the entire floor section bouncing in unison) and Beyond The Flames (played live for the first time tonight) intertwined with the likes of This Is Absolution (a very popular choice) and Take This Oath, all of which garnered full audience participation along the way.

Whilst Jesse spoke to the crowd on occasion and was very grateful for the support shown, Adam D had his proverbial ringmasters hat on as usual, though he was toned down a little compared to other occasions. “Who doesn’t have to go to work tomorrow?” Cue loud cheers. “Who wants to make some regrettable decisions?” Cue more cheers. “How many of those people are women?” Cue numerous, more high pitched cheers. You all know where it goes from there, and this was just one such exchange as Shepherds Bush Empire hung off every word.

Approaching the last third of the show, the intensity and volume increased even further for the likes of Rose Of Sharyn, Numbered Days, In Due Time and My Curse before blowing what remained of the roof from the Shepherds Bush Empire with the finale of The End Of Heartache and the obligatory encore of My Last Serenade (with a little bit of assistance from the Sylosis lads).

The full Killswitch Engage setlist was:

To label this night anything other than triumphant would be a travesty, as this must be one of the finest gigs of any musical genre to take place in this famous old London theatre. It was a gig that only left those in attendance wanting more, whilst those who missed out on tickets will be taunted by their friends lucky enough to be there for quite some time. Killswitch Engage’s return to the UK was always likely to be a success but this night was something else. All we at Rocksins can do is recommend that you go and buy tickets for Hevy Festival (where Killswitch will be headlining in August) so that you can see them again, or make up for having missed out. A truly wonderful evening of metal that will remain long in the memory.