A couple of weeks ago here on Rocksins we announced that UK metalcore rising stars Bury Tomorrow had announced a huge UK headline tour for October 2013 (if you missed the original announcement, you can view it here). Not content with announcing such a substantial tour, Bury Tomorrow haven’t wasted any time in lining up their support acts for the tour.

Filling the direct support position for the tour will be rising stars of UK hardcore Feed The Rhino, who have built up a reputation as an excellent live band after spending the last year on the road including opening up the London date of the 2013 Jagermeister music tour with Ghost and Gojira. Also onboard for the trek are promising UK prog metallers and Bury Tomorrow’s fellow Download Festival participants Empress, who have been making waves in the UK metal scene, particularly in the first half of 2013. Rounding off the quartet are another UK metalcore act in the shape of Heart In Hand.

The full dates for the tour can be seen either on the original announcement or on the tour poster below. If you missed it, Rocksins caught Bury Tomorrow’s show at Download and thought they were one of the bands of the whole festival. Our review of Bury Tomorrow at Download 2013 can be seen on this link. Any further updates from the Bury Tomorrow camp will be announced here in due course as they become available. In the meantime follow Bury Tomorrow on Twitter at @burytomorrow. 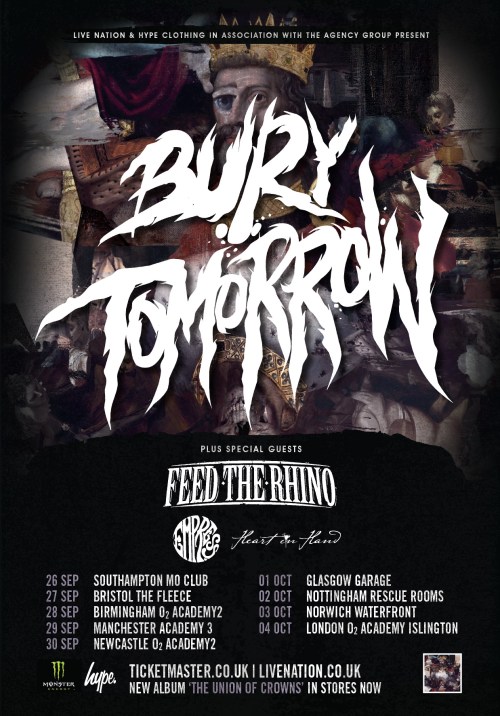