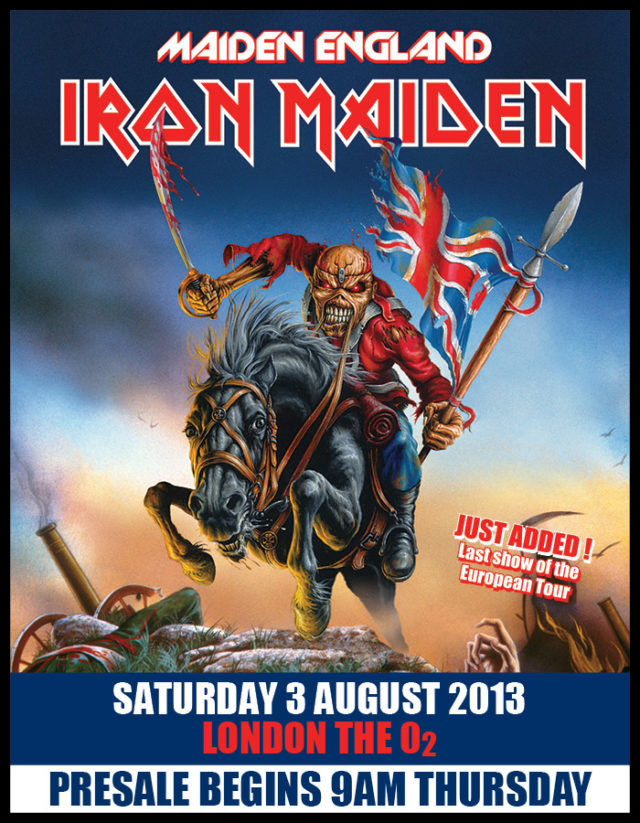 Fresh from their headline performance at Download 2013 (complete with Spitfire in one of the most memorable show openings ever), the mighty Iron Maiden have announced that their Maiden England European Tour of 2013 will conclude with a new show on home turf.

As some of you may have heard Bruce Dickinson announce during their Download performance, Iron Maiden will be taking to the stage at London’s O2 Arena on Saturday August 3rd, which will be the last time the Maiden England show is performed in Europe for the forseeable future (and maybe ever). Tickets are currently on pre-sale to members of the Iron Maiden fan club. Tickets will be on pre-sale to the general public this Thursday (27th June 2013) and go on general sale at 9am Friday June 28th 2013.

The show will be taking advantage of paperless ticketing, which is something Iron Maiden have used successfully in the past on two of their recent American tours. The band’s manager Ron Smallwood had this insight about the decision to use paperless ticketing:

“We are all very pleased to round off this part of the tour back home to celebrate and it promises to be a great night. We used Ticketless (Paperless) Ticketing on our North American Tours in 2010 and 2012 and it worked extremely well and we received many positive comments back from our fans. With Ticketless (Paperless) Ticketing, only those who actually pay initially for the tickets will get into the show so scalping is generally avoided. We are also doing everything we can to avoid any drain of tickets going to the Secondary Ticketing sites which we feel make unfair profits from music fans and often lessen the number of tickets available to real fans, especially at the on sale.”

Further Iron Maiden updates (including coverage of their Download 2013 performance) will be available on Rocksins as and when they become available.