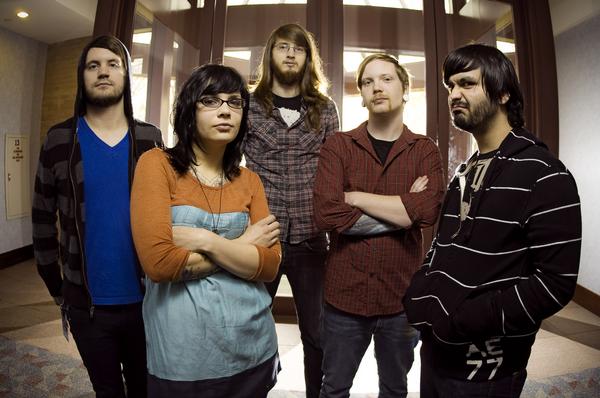 Los Angeles based experimental-heavy-rock band IWRESTLEDABEARONCE have announced details for their third studio album, Late For Nothing, due out on August 6th via Century Media Records.

Late For Nothing was self-produced, recorded, mixed and mastered by the band’s guitarist/programmer Steven Bradley at the band’s home studio in Los Angeles.  It also marks IWABO’s first record with their fiery new singer Courtney LaPlante who joined the band with only a day’s notice during last summer’s Vans Warped Tour.

The entire album came together as a result of us wanting to do something different,” affirms Bradley. “We didn’t want to make another weird IWABO album or whatever people were expecting.  We set out to make something different and better than anything we’ve ever released.  It’s a more evolved version of the band.  We explored new styles and genres as well—especially in terms of the more spacey, epic, and beautiful parts. It’s got the most melodic moments of our career as well as the heaviest.

While the band’s signature, avant-garde style is well intact on the new album; their style has progressed immensely.  By far their boldest and most accessible release to date, Late For Nothing rips and roars with blunt force intensity, incorporating their brain joggling breakdowns with a unique blend of electronics, jazzed-out time signatures and break neck riffage.

IWABO will head to Europe for a summer run before returning to support the release of Late For Nothing in the U.S. on The All Stars Tour 2013 with Every Time I Die.