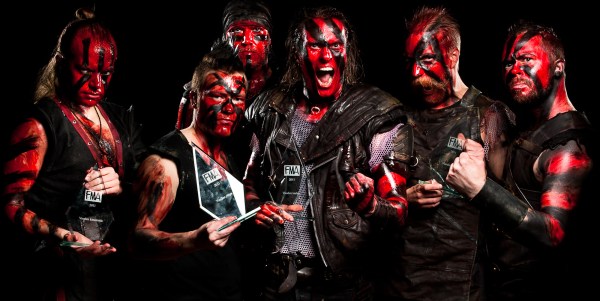 One of the more unique acts currently occupying the metal world, battle metal outfit Turisas have announced a double dose of news for their fans. Firstly, for Turisas followers in the UK, on the back of their appearance at Download 201 the band have announced a five date headline tour of England and Scotland as part of their Autumn 2013 European Tour. The tour kicks off in Bristol and finishes up four days later in Manchester, with stops in London, Nottingham and Glasgow along the way. Full details follow below:

Tickets are priced at around £12 plus booking fees and will be on general sale from 9am on Friday 21st of June 2013, available at Seetickets, Live Nation and all the other usual online ticketing websites.

Turisas will be touring in support of their new forthcoming album “Turisas2013”, for which the band has just unveiled the album artwork (please see the picture below for what it looks like).

When asked about Turisas2013, the band’s charismatic singer Mathias Nygård (aka Warlord) gave an insight as to what listeners can expect from the new Turisas album:

“When it comes to the production it’s just the opposite of the polished and massive ‘Stand Up And Fight’. It’s raw and dry and in your face, but still maintaining that TURISAS-largeness. People attest us that we are a great live band and we wanted the album to be based more around that than orchestral massiveness. It’s our most varied record to date and even if some of the songs sound very different, I think the common thread is that every single one has a lot of energy to it.”

Turisas2013 is being released through Century Media Records will land on shelves and Mp3 online stores on the following dates:

Turisas2013 is the first album to be put out by the band’s new lineup, which is detailed below:

For the latest metal tour announcements as well as the latest news and reviews, please keep checking back with Rocksins.com on a regular basis.